The aviation recovery is underway, well it is in some parts of the world and it’s beginning to pose some interesting questions as airlines reshape and reassess their strategies for the next decade. In adversity is opportunity, and for both existing and new airline entrants’ opportunities to not only adjust their networks but review their fleets, operating models and of course renegotiate many supplier agreements. It is a moment when many CFOs prove their value, moving quickly and making big brave calls that will define the airlines success, or indeed not.

Against that backdrop one of the few constraints that has over time proven almost impossible to overcome in many markets is airport capacity and physical space for capacity growth. Whilst in some emergent markets building a new airport is a relatively easy solution, the same cannot be said for many mature markets where slots are constrained. It’s a challenge for many airports, and for the airlines it’s an even bigger problem since most carriers love to follow the lemming strategy of air service development and just follow others into the same markets. So how do airlines handle that particular challenge?

It may seem slightly counter intuitive but there is no better time than now to place an order for new aircraft. The pandemic has seen many carriers cutting orders or seeking deferrals on delivery; at the same time the B737MAX is now back and approved for operations in many markets, the A321XLR is gaining momentum and aircraft manufacturers want to fill the order books to rebuild confidence and long-term price.

In the last few months, Ryanair and United Airlines have placed huge orders for new aircraft and Delta Air Lines are apparently about to place a larger order themselves. For Ryanair this strategy of buying when the market is soft is part of their DNA ; they have done it before and will do it again and it has little or no relation to constrained airports; it is a sharp business decision. For United Airlines who operate one of the older US fleets the messaging around their order was about product improvements, cost benefits and a small reference to maximising capacity at airports in their network which are increasingly constrained. So, we have analysed the average capacity per movement at major global airports and how this has changed over the Covid-19 pandemic period.

A Wide Range Of Results

Our starting assumption was to extract the top thirty airports by capacity for July 2020 and draw comparison against the same month in 2019 with an expectation that all of those airports would have similar levels of capacity per movement; we were wrong!

Not surprisingly the list is currently dominated by those markets with large domestic travel demand; for many airlines it has been the only bright spot over the last eighteen months. The exception amongst the top five is of course Dubai where the Emirates operation and specifically the return of the A380 will eventually push the average capacity back close to the near 300 level of July 2019. 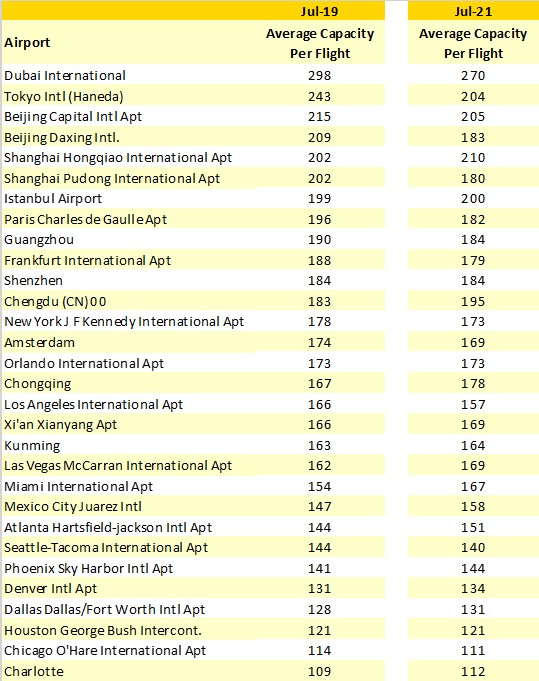 In second place Tokyo Haneda has seen the average capacity per movement fall by 16% as airlines flexibly swap in and swap out wide-bodied capacity in what has always been a very strong market.

The two largest Chinese city markets, Beijing and Shanghai both have split operations across two airports. Shanghai Hongqiao, the slightly smaller and domestic focussed airport ranked 18th in size amongst the top thirty airports but with an increase in average capacity per movement ranked fifth on that metric. The almost incredible flip of Chinese capacity to domestic services from international operations results in half of the top twenty airports on capacity per movement being in China.

At the other end of the spectrum are airports such as Charlotte, Chicago O’Hare and Houston George Bush where capacity per movement is less than half of the leaders. Thirteen of the top thirty airports listed are in the United States but seven of those occupy the lowest positions based on capacity per movement. The fact that two of the bottom three are major United Airline hubs may in part reflect their comment around capacity constraints but Chicago O’Hare opened a new runway at a cost of US$ 516 million in 2015 and is currently spending its way through another US$ 8.5 billion project to improve passenger facilities and shorten connecting times further.

Whilst the big three US airlines operate a mix of aircraft types across their networks there is a remarkable similarity in the average capacity per movement as the table below highlights. Before Covid-19 United had a slight advantage over their two major competitors with 174 airline seats per movement compared to 166/166 at American and Delta Air Lines.

This month all three carriers will have around 172 airline seats per movement; for both Delta and American that represents around 4% more productivity per movement and in an industry where even in normal times margins are wafer-thin such marginal gains can be the difference between profit and loss.

Looking slightly more deeply at the United Airlines network and their five largest base airports it seems that the airline has managed to build additional capacity per movement in Chicago O’Hare, Newark and San Francisco but at the expense of Denver and Houston. Again, slight margins, in all cases but multiply those gains over a full year of normal operations and the differences can be substantial.

The decision-making around new fleet orders is complex and covers many different issues with the financing package and operating costs the key elements; factors such as building additional capacity per movement create nice sound bites but only provide interesting insights into the airline's current thinking at that moment in time. Ultimately though as with so many individual parts of an airline operation marginal savings are crucial to the bottom line and those extra few seats may in time result in a lot more revenue for United Airlines and that is all that the shareholders will be interested in!