Virgin Atlantic have confirmed that they will be retiring their remaining fleet of five A340’s while Air France have confirmed an intent to retire their fleet of ten A380’s by 2022. With so much happening what does this actually mean for the two aircraft types?

A major airline used to heavily promote that four engines were better than two with bold messaging across their aircraft; that airline is now predominantly a two-engine aircraft operator; how things change over time. For many the gradual reduction in A340 flying is only beaten by the notoriously slow speed of the aircraft that can add over an hour or more to a transatlantic flight. 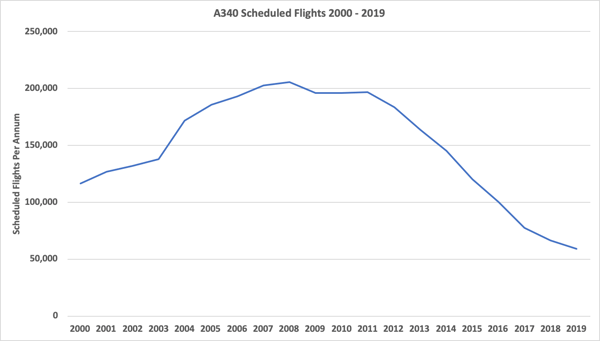 This year some forty scheduled airlines will operate the A340 with the top ten listed below.

Collectively these ten carriers will operate over 80% of the planned services. Indeed, Lufthansa alone will operate nearly one quarter of all services. For many carriers the trend is to reduce A340 operations whilst working through fleet replacement

programmes whilst perhaps the increased flying from carriers such as Mahan Air and Edelweiss is more about opportunistic aircraft lease rates.

The decline of the A340 is now well advanced and whilst it will like so many other aircraft which continue to be operated by some airlines, it will become an increasingly rare sight around the world’s major airports. So, for those looking for a final view the best place to snap a picture will be Frankfurt where some 5,594 flights will operate through the course of the year although Madrid may offer a slightly warmer alternative with 4,572 flights.

A380 Loses Its National Carrier

Despite A380 assembly in Toulouse there always appeared to be a reluctance from Air France to take the aircraft and with only ten in their fleet it was always seeking out suitable destinations. Hong Kong, Sao Paulo, Singapore and a number of destinations in the United States have at some point been served by an Air France A380 but finding the right market fit has proven to be challenging for so many airlines.

For Air France announcing their plans for the A380 alongside a large A220 order may be seen as a piece of positive PR around a decision that would otherwise have received greater coverage. The A220 clearly is not a direct replacement and the A380 will ultimately be replaced by a combination of existing fleet and new A350 aircraft that are scheduled for delivery from September onwards.

Perhaps surprisingly given all of the stories around the A380 the number of flights operated by the aircraft has grown year on year since its launch just over 10 years ago in 2007. With Emirates still taking deliveries there has been net growth in scheduled services and that will probably continue just into 2020 before airlines begin to replace the aircraft with newer aircraft types with better operating economics than the A380. 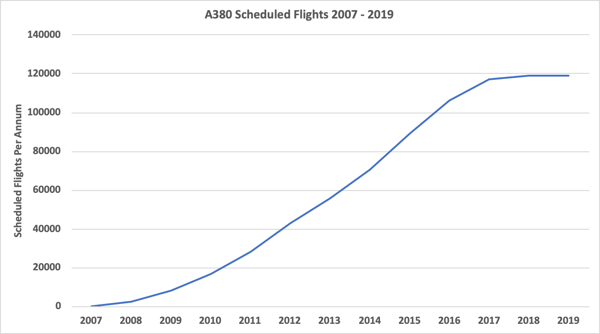 Few industries move as quickly as aviation and the speed of change, technological advancement and changing market conditions are all part of that evolution. For aircraft types the speed of obsolescence is quickening; the A340 first entered service with Lufthansa in 1993 and at current run rates a lifespan that will probably not stretch beyond 2030 whilst the A380 will probably have no more than a 30-year lifespan given current market sentiment.

New aircraft, longer ranges, ultra-long-haul services, long and thin point to point services are all indicators of the likely way forward in the next decade and the A340 and A380 are sadly victims of that evolution. Just as well there wasn’t an A360 as well!