After a long hiatus, the B737MAX is finally back in the air again. Approval was given by the FAA (Federal Aviation Administration) in November 2020 for the grounded aircraft type to take to the skies again, for airlines under the FAA jurisdiction, and this action saw a number of other countries follow suit with regulators in Europe, Britain, Canada, Brazil and the UAE giving the go ahead for take off. This isn’t the case in Asia yet where the aircraft remains grounded. In this short article we take a look at who is flying the B737MAX since its return and where.

Back in February 2019, when the B737MAX was still in operation, flights on this aircraft type accounted for 1.1% of global capacity. Today, in February 2021, less than half that amount, 0.4% of global capacity operates on the MAX aircraft. In 2019 there were 36 carriers with the B737MAX operating and now there are just 8 carriers currently operating the MAX, all but one who are based in the Americas.

Two years ago, Southwest Airlines was the biggest operator of the MAX, with 41 of the aircraft in their fleet but as of February 2021, their fleet of MAX aircraft were still not back in the air earning revenue. However, Southwest have confirmed this week that their intention is to restart MAX operations this month on multiple routes across their network.

American Airlines and United Airlines have already taken that step, with the MAX back in operation in February, albeit at less than the rate previously operated. 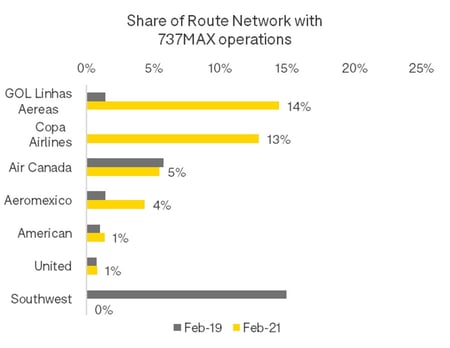 American Airlines currently have deployed the MAX on 19 of the 1,423 routes they operated in February, just 1% of their route network and the majority of these operate out of the Miami hub up and down the East Coast with a mix of domestic and some international routes. 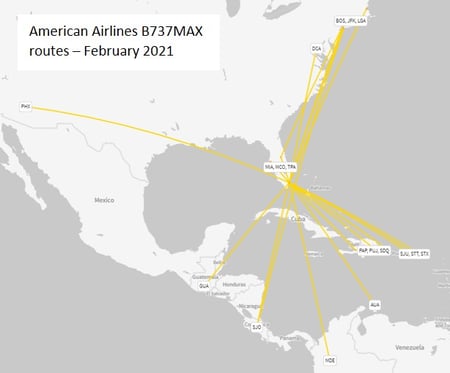 For United Airlines, the spread of routes is much broader crisscrossing the country, with all deployed on domestic routes. The percentage of United routes with MAX operations is the same, just 1%, which is in line with their deployment of the MAX two years ago.

On the other hand, in February 2019 Southwest Airlines operated the MAX on 254 routes, or 15% so it will be interesting to see how these are distributed across their network when the aircraft re-enters service this month.

Both Aeromexico and Gol stand out as having increased the volume of capacity operated on the B737MAX, compared to February 2019. Then, Aeromexico had nearly 93,000 seats in February 2019, operating to Monterrey domestically and to Bogota and Peru internationally. Now, the MAX operates on four domestic routes, serving Cancun, Guadalajara, Monterrey and Tijuana. It operates on just one route internationally, to Los Angeles in the USA, most likely down to the lack of regulatory approval in neighbouring countries.

Gol has moved a large share of its current capacity onto the MAX, onto 42 domestic routes, or 14% of its route network.

Therefore, it’s clear that there are different strategies afoot as carriers of this beleaguered aircraft type juggle to slot it back into the most optimal place in their post COVID networks. There are also carriers still waiting for MAX deliveries, most notably the IAG group who have an option for 200 of the aircraft, signed in 2019. With plans to base some of these aircraft out of the British Airways London Gatwick base, it remains to be seen what IAG decide to do with this option, and whether we will see MAX operations over London anytime soon.