Over the past six months there have been numerous articles extolling the virtues of Delta Air Lines’ decision to deploy some of its widebody aircraft fleet on domestic airline routes. Travellers prepared to pay have been able to use the lie-flat seats and make use of Delta’s Premium Economy cabin on domestic flights. Some of the services have been announced as temporary measures while travel restrictions and weak demand limit the scope of flying them on international airline routes.

As we move into the Winter season and as US international air travel opens up, how much change has there actually been in the way the Delta fleet has been used? Has the pattern been more on the allocation of a state-of-the-art A350 judiciously used on a few high-profile routes, or has the airline really been changing the way it flies, and might these changes be permanent?

Across all domestic routes operated with a ‘DL’ code the average number of seats per aircraft has been rising steadily. At the start of 2020, before the world of aviation was rocked by coronavirus, the average number of seats on a domestic Delta flight was 118. Aside from the period in April through to June 2020, when fleet planning at all airlines went into freefall, this has steadily increased and reached 125 seats in October 2021. 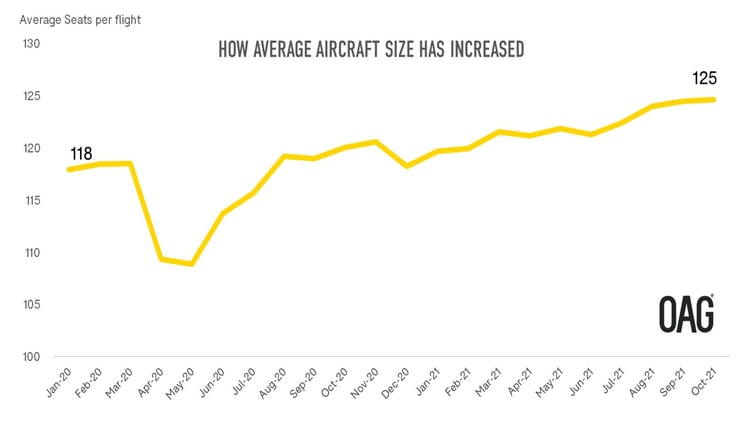 How has this been achieved? The mix of aircraft has changed considerably. If we compare what is flying now with what was in the schedule two years ago there are major changes. Gone are the 777’s, M80’s and M90’s, albeit that there were very few widebody 777 flights operating then, and the M80’s and M90’s were actually operating with fewer than the average number of seats.

Watch: Webinar - Is a sustainable recovery on its way?
Is China’s Zero-Covid Strategy Sustainable? Airline Capacity Falls by 800,000 Seats
On-Time Performance and Punctuality League
US Aviation Market Insights and Analysis

The number of A320 flights have increased although 737 flights have been reduced meaning that this change contributes little in terms of average aircraft size. What has made the main difference has been the declining proportion of capacity on 717’s, 757’s and CRJs, all smaller than average sized aircraft, while 767 capacity has increased. The CRJ (and EMJ) flights are of course operated by Delta regional affiliates. 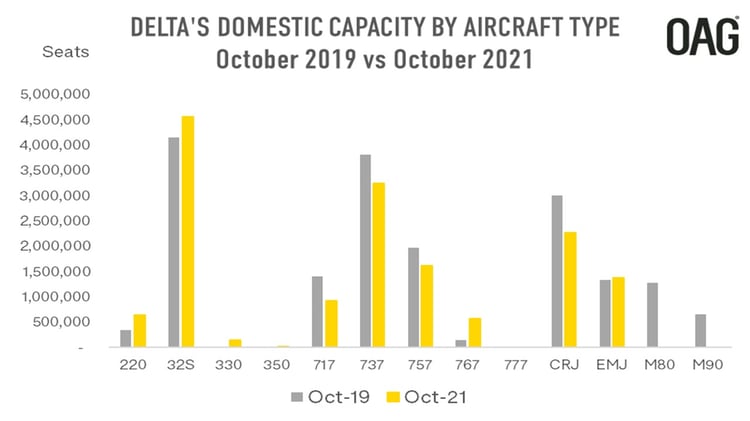 It’s perhaps a subtle change and certainly not due to mass deployment of A350’s on domestic routes. In fact, at the peak of A350 use on domestic routes in April this year, capacity on A350’s only contributed 0.3% to the total number of seats flying. 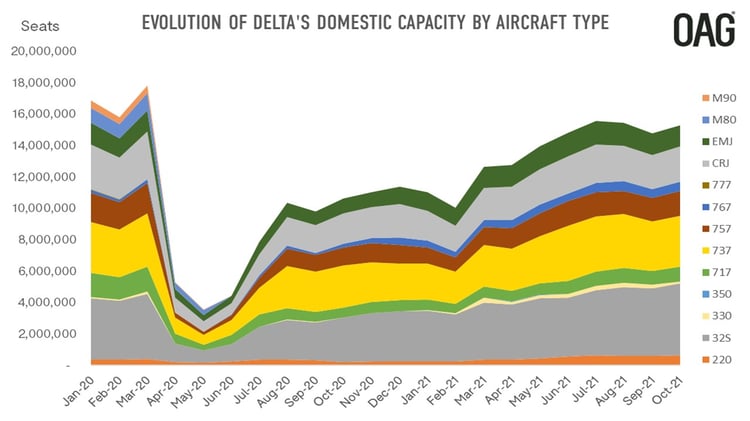 Across the Top 50 domestic routes flown by Delta Air Lines since the start of 2020, it’s clear that this trend towards slightly larger aircraft has been widespread, rather than a matter of selecting a few routes for larger aircraft. This is unexpected given that the change has occurred through a fleet wide change in the mix of aircraft.

Part of the rationale for this change has been the recognition that there is perhaps underserved market for premium economy flying among leisure travellers. Airline capacity, as reported through a mix of First, Business and Economy seating, doesn’t hint at a change in seating preference. The proportion of Delta’s economy seating was 89% in October 2019 and remains 89% today. 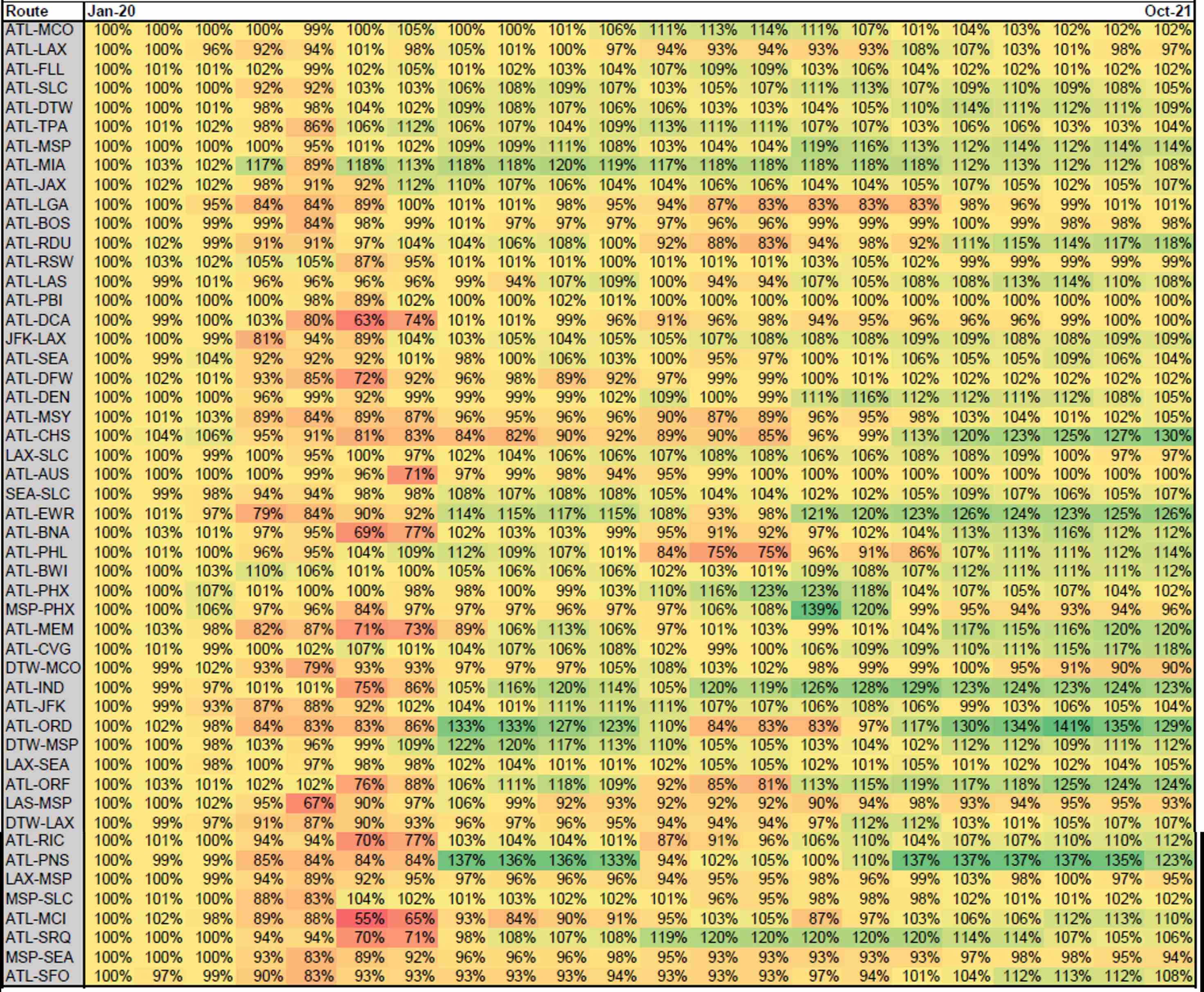 Source: OAG | Download a larger version of the above table here

Unfortunately, neither does the traffic data. The most recent passenger data available from OAG, for August 2021, shows that the proportion of passengers travelling in Premium Economy is 11% while 3% use Full Economy. This compares to 13% and 3%, respectively, in August 2019. Of course, this could be considered better than expected performance given the strains on aviation and that Delta was flying 15% fewer seats this past August than two years previously.

It’s helpful to dig a little deeper and examine some airline routes. Atlanta-Las Vegas, a major leisure route for Delta, shows a similar pattern, with Premium Economy making up 8% of passengers in August 2021 compared to 12% in August 2019. However, in absolute terms, the route has grown 50% and the number of Premium Economy passengers this past August exceeded the number of two years ago.

The largest domestic airline route, Atlanta-Orlando, also grew between August 2019 and August 2021, with 4% more passengers this year, although there were 17% fewer Premium Economy passengers.

Of course, looking at airline capacity and traffic volumes does not provide insight into Delta’s revenue management processes and the yields that are being obtained on the domestic routes. Overall, though, widebody capacity now makes up close to 4% of the airlines’ domestic capacity, rather than 0.9% before the pandemic. Those larger aircraft with more seating options and cabins must surely enable the airline to take advantage of any emerging consumer taste for more space and better service when they fly.