A Welcome Injection of US$ 2.8 Billion For Transatlantic Carriers

After more than 200 days the world’s most lucrative international market reopens, with full access for travellers flying between the United States and its major trading partners in Europe finally open. It may be symbolic of the industry in recovery and indeed many airline CEO’s are today flying in one direction or the other seeking valuable soundbites in this week’s press. More importantly, in November and December 2019, revenues of some US$2.8 billion were generated and every airline will be hoping that the pent-up demand generates that type of cash straight away. If only...

Global capacity continues to fall week on week despite the optimism that we are seeing around the globe with markets reopening and airlines either bringing back new routes or launching new services. At 75.4 million seats this week shows a decline of some 2.5 million on the previous week and indeed some 6 million seats have been removed by airlines through to the end of November; some of those may have been airlines just adjusting planned capacity but with 30% fewer seats than two years ago the recovery has some way to go yet. 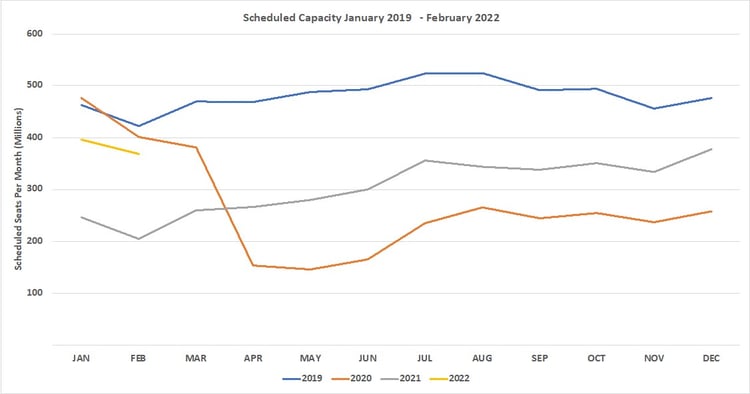 Continued Covid outbreaks in China are reflected in the North East Asia region reporting a near 11% drop in seats week on week and whilst we know that capacity in China can bounce back as quickly as it disappears heading into the Winter season it is an alarming trend. More significantly such cuts in domestic capacity push back any recovery in international capacity further and for the surrounding markets to China that is a real issue as we will soon head into the first quarter of 2022.

Both North America and Western Europe report declines in capacity which may seem slightly odd in the context of the transatlantic market reopening. However, many legacy carriers had already expanded capacity ahead of the opening and only the UK market shows any significant capacity growth to North America this week with British Airways and Virgin Atlantic both “launching” their first fully commercial flights off the Heathrow runways at the same time, such sweet symbolism.

We frequently get asked to mention Africa in the weekly analysis and so we have, but there is not much to comment on! Total capacity this week is down a further 3% to some 2.3 million seats which makes the region account for around 3% of global capacity and languishes -27% on 2019 levels. Southern Africa after a few weeks of growth has moved backwards in the last seven days with a near 9% capacity drop, not surprisingly as the largest market South Africa is driving the decline. Elsewhere Western Africa reports a very small 1% increase in weekly capacity, but the two remaining regions sadly report small reductions in weekly capacity.

The near 1.9 million reductions in Chinese capacity is one of the largest capacity cuts we have seen in any market this year reflecting the dramatic action being taken by authorities in all the regions. Every airline operating in China has to some degree been affected by the travel restrictions and with authorities in Hong Kong now imposing similar restrictions to those of China carriers such as Cathay Pacific are also now being increasingly impacted.

More positively, we can at last welcome back Australia to the global top twenty with an 8% week on week increase and increasing optimism around international travel from New South Wales and Victoria. Other states in Australia continue to appear more cautious with Western Australia announcing plans to reopen “sometime in the new year” such vague statements not particularly helping airlines plan or travellers’ book with confidence; still it will satisfy someone!

All the major Western European markets report reductions in weekly capacity as the stragglers from the half-term holiday are now all safely back. At this time of year many European carriers take a “deep breath and relax” having operationally survived busy summer season; this year they just relax and realise they have managed to survive; well done guys….just the Winter season to get through now.

Amongst the Chinese carriers, China Eastern currently appear to be the exception to the rule with “only” a 5% capacity cut this week whilst many of their peers are cutting capacity by much larger amounts. China Southern for instance have dropped nearly half a million seats this week and Air China scaled back their capacity by 15% all of which creates more distance from the major US carriers who fill the top four in the charts.

Across Europe, the battle for supremacy is no longer a battle with Ryanair comfortably winning. With 2.7 million seats on offer this week they are twice the size of their nearest European competitor in Turkish Airlines and now nearly three times larger than easyJet who reduced capacity by 15% this week. Different strategies bring different results but Ryanair are certainly being bullish for the winter season and are prepared to stimulate demand at almost any price for the next few months, there will be an inevitable offer of free seats (taxes and airport fees excluded of course) from the ever generous airline at some point soon.

Sadly, and to be discussed in OAG’s dedicated Asian webinar this week the major carriers from that part of the world continue to find a path to recovery difficult. Outside of China, only All Nippon Airways manage to squeeze into the top twenty and carriers such as Cathay Pacific (-60%), Malaysia Airlines (-72%), Air Asia (-70%) and Singapore Airlines (-61%) are all “doing a Norwich” and propping up the table, although none of those carriers will sack their CEO after a win!

The recovery, well the beginning of the recovery, has resulted in some strange developments across some airlines and indeed interest from some carriers in what were considered obsolete aircraft. Emirates have had no choice but to back the return of the A380 and their hub network does require a critical mass of connecting traffic and large seat volumes in concentrated hours of the day. But other carriers are now bringing the A380 back into service, with British Airways relaunching the aircraft on scheduled flights this week; it has already been doing some short-haul crew/operational training. In the table below we have tracked the number of scheduled flights by carrier for the world’s largest commercial aircraft since January 2020 and there may indeed be some recovery underway. This week there will be some 542 scheduled A380 flights and while that is only 25% of pre Covid levels airlines and Emirates still dominate operating 92% of all flights, others such as Qatar Airways and BA are dusting down their fleets ready for more flying in the next few months. 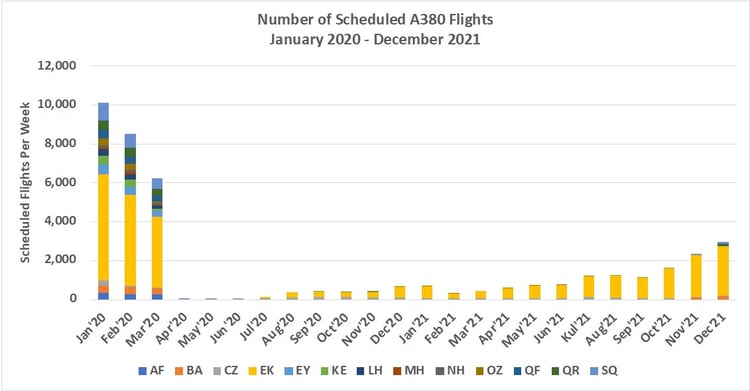 So, this week promises to be exciting, and analysts will be tracking load factors on those new fully open and unrestricted flights across the Atlantic. It will be easy to report higher than average load factors for this time of year and premium cabins being rammed (mine certainly was back from Toronto last week). But, with all that pent-up demand should we expect anything less? Probably not, and if there are empty seats then there are enough airline staff looking to fill the few empty ones, especially at the front of the cabin! A more realistic assessment of the recovery and its strength, particularly in the corporate sector will be in February and March of next year, but that’s a long time away yet, isn’t it?