The great aviation recovery is underway, or more precisely - airline capacity is rebuilding in many parts of the world, airline schedules are more stable than they have been all year, and if you are double vaccinated (and able to work out the paper trail of requirements) you can travel freely to most parts of the world. However, you are still unable to travel everywhere and, in a throwback to the mid-nineteenth century, there are markets that remain firmly shut for nearly all international travel and that is not good news for the airline industry. For most airlines, it is generally accepted that international services are more profitable than short-haul domestic services; indeed, some airlines with major hubs happily operate some domestic flights as “loss leaders” to feed their international networks.

Top of the Wrong League Table

The pandemic has created lots of new and interesting data points, many of which are presented as tables of information, and we have finally produced the table of international airline capacity that you would expect no country to want to feature in. The table below contains the top twenty international markets at the beginning of the pandemic and then compares them to their current levels of capacity and sadly the percentage reductions in many of those markets remain very high. 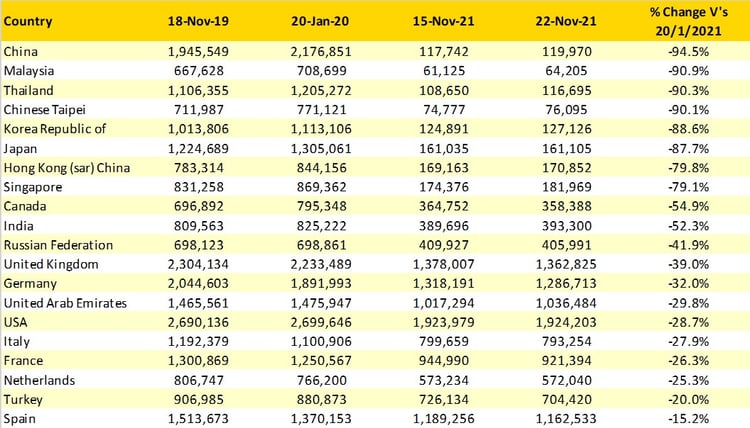 The interdependency between all eight Asian markets essentially means that until all markets are fully reopened then the impact for airlines and airports in the region will threaten any market recovery. China is clearly key to any recovery, pre-pandemic there was around 1.35 million seats to the other seven international markets; this week that number is just 61,000, a weekly reduction of some 1.3 million seats in each direction! Assume a conservative load factor of 75% across all those seats and typically that would equate to around 1.95 million passengers in both directions and then apply a cautious US$200 yield per passenger and that suddenly stretches out to US$390 of lost revenue a week across those markets. In a year that reaches an incredible US$20.2 billion of revenue that airlines in the region desperately need.

Despite the creation of numerous Virtual Travel Lanes (VTLs) to and from Singapore, Cambodia reopening, Malaysia announcing a phased international reopening and Thailand having already established a series of protocols for international arrivals - the collective impact of all these actions in the context of a US$20 Billion revenue gap are but drops in the ocean. So, when will things change?

In the case of China there is clearly no urgency to re-open international borders ahead of the Winter Olympics scheduled for February 2022 and recent interviews with leaders of the aviation industry in China suggest that the lockdowns could continue into the third quarter of next year. The financial impact for many carriers in the region will be devastating with millions of dollars lost revenue if China’s lockdown does stretch into the second half of next year. China may be the main blockage point now, but Japan is equally struggling to cope with accepting international arrivals.

Last week, Japan announced that from the end of November they will be able to process up to 5,000 international arriving passengers a day: an increase from the current 3,500. On a normal day pre-pandemic, there were typically some 175,000 international arriving seats operated to Japan the current thresholds are frustrating every carrier operating to Japan. That frustration is compounded by airlines being advised at short notice of how many passengers they can carry on any given day and in some cases having to cancel reservations to be in compliance with their quota. Hardly helpful for airlines attempting to recover from a global crisis.

Given the current situation, it is unlikely that any return to near-normal levels of capacity and passenger volumes across the key Asian markets are likely before 2023 and probably the second half of the year allowing for market confidence to be fully restored. Of course, things change quickly and the speed of the recovery from the pandemic has surprised many but when one or two major countries appear to be dragging their feet in reopening than the wider impact is significant.

China certainly feels under no pressure to change its strategy and Japan is moving very slowly in its recovery and does not appear to have developed the supporting processes and infrastructure to rapidly increase the volume of international arrivals. Airlines throughout Asia and indeed around the world will continue to be frustrated as two of the world’s major markets remain closed for international travel. But do either care... seemingly not!