Travel restrictions put in place to protect citizens in many of the countries of South East Asia and Southwest Pacific have remained longer than in most parts of the world. The result has been particularly damaging for air travel to, from and within the countries of this part of the world. As the chart below shows, these two regions are lingering at the bottom in terms of how far from 2019 levels of airline capacity the current scheduled capacity is.

In November 2021 OAG ran a webinar which took a deeper look at this phenomenon, to better understand the dynamics between government policies, air travel and vaccinations rates. It was clear that the relationship between these factors is being played out differently in other parts of the world, with different results, but there are signs that this is changing. 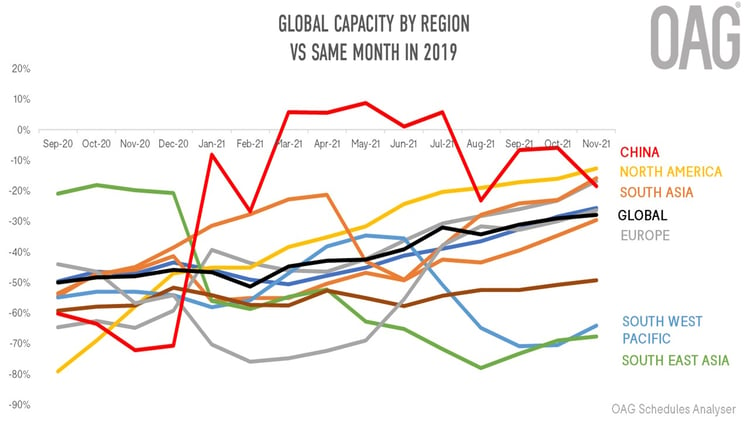 The Role of Vaccination on Air Travel Recovery

One of the easiest ways to understand the role that government-imposed travel restrictions are playing, is to see how international air travel has changed over the past few months mapped against the roll-out of covid-19 vaccination programmes.

Elsewhere in the world where the proportion of a population has had at least one dose of the vaccine, there is a general trend of more international air travel. Specifically, when vaccination levels reach around 70% there seems to be a tipping point which is evidenced in rising scheduled airline capacity. This has not been true in South East Asia or Southwest Pacific. As the chart below shows, airline capacity as a proportion of capacity for the same week in 2019 has actually fallen further back as vaccinations rates rise. This applies to Australia, Cambodia, Laos, and New Zealand, while Indonesia, Malaysia, Singapore and Vietnam have barely seen international airline capacity change as large swathes of their populations have been vaccinated. The contrast with Bangladesh and India which have operated more open travel policies is marked. 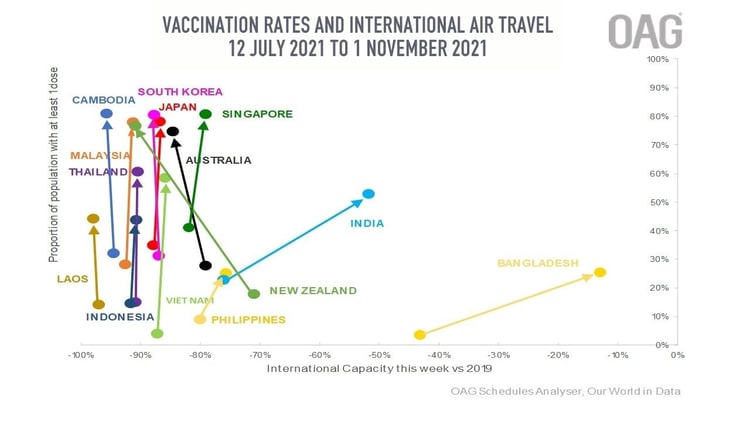 One of the additional observations, and one that also marks South East Asia as different to trends elsewhere in the world, is that intra-regional air travel appears slower to recover than some long haul markets.

Historically, capacity to Europe and North America will have been smaller than the intra-regional volumes, but nevertheless, the degree to which capacity to these regions is falling short of pre-pandemic levels is much less than for capacity to neighbouring countries. While capacity between the Philippines and Europe is down by 39%, it’s down by 76% between Philippines and South East Asia. All the major South East Asian countries have seen regional capacity hit harder than capacity to Europe, North America and the Middle East. 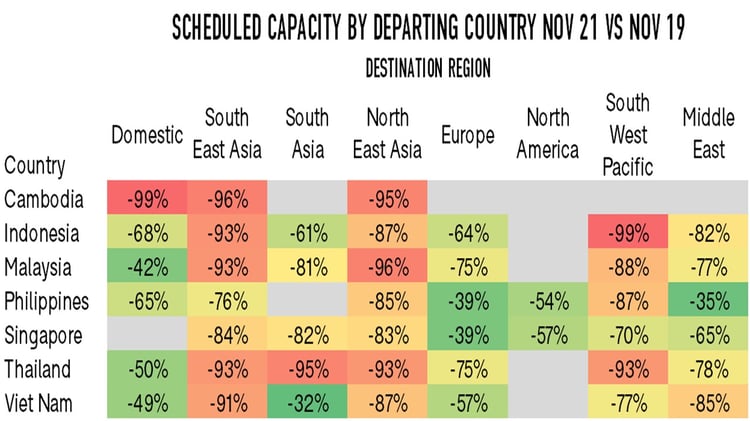 There are plentiful signs that this situation is on the cusp of changing:

The signs of openness across the region will encourage more airlines to restart air services - although the continued loss of the Chinese outbound travel market will continue to make its presence felt, and may limit the extent of recovery across South East Asia unless other source markets can be tapped for new flows of tourist arrivals.