It feels like it has been a busy week in terms of airline activity. Capacity continues to grow in some markets without there really being any logical explanation, CEO confidence across the US majors continues to grow, rumours of transatlantic corridors for the summer, warnings around extended travel bans in Europe as COVID-19 v3 over the weekend, Japan confirming no international visitors for the Summer Olympics and complete confusion around the vaccine roll out in Europe. It’s been a quiet week!

With such a topsy-turvy week of news, scheduled airlines capacity somehow or other continues to creep forward by another 1.4% to 59.8 million; the excitement of potentially breaking through the sixty-million-mark next week will keep me awake all week with anticipation.

Just to keep things in perspective though, some 17 million more seats were removed from sales this week through to the end of May and as we head towards some key deadline dates for lockdowns being eased, airlines are now looking out to the end of April and May making necessary capacity adjustments. At the beginning of March scheduled airlines were planning some 309 million seats for April; this week that is 284 million; some 9% of capacity being cut less than eight weeks before the scheduled date of operation 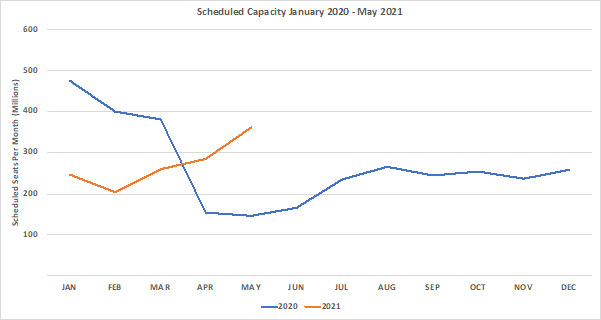 The largest region for capacity growth this week is Western Europe, currently experiencing another COVID-19 spike scheduled airline capacity is up some 13% week on week; I’m not quite sure how the logic of both capacity and COVID growth works but it is a strange world at the moment. Lower South America continues to see weekly capacity reductions, this week another 150,000 seats were removed from sale; in the last three weeks some 25% of all capacity in the region has been cut and clearly in that market at least there is a linkage between COVID-19 rates and capacity.

Providing some balance, Upper South America has seen a week-on-week capacity increase of over 8% with an additional 70,000 seats on sale the vast majority of which are in Colombia with both Avianca and Viva Air Colombia adding more capacity, much of which is in the domestic market, international capacity remains consistently like a coffee; flat white please!

There is considerable capacity growth in a number of European markets this week, partly ahead of the Easter Holiday season and also perhaps a false hope of recovery before the latest outbreaks of COVID across the continent. An incredible 32% increase in capacity to and from Spain is based around a doubling of capacity this week from Vueling with Iberia also adding back some 15% more capacity, it's either a brave move ahead of the wider market sentiment or subject to rapid change in the next few weeks.

Germany’s 26% week on week capacity growth is driven by locally based airlines with Lufthansa adding 16% more capacity and Eurowings 43% more seats. Such capacity growth just feels out of line with the current news stories coming from Europe around increased infection rates; it feels like capacity will have to be cut in the short-term or airlines will be operating with very low load factors in the next few weeks. Can airlines afford to burn more cash with flights not covering operating costs in the next few weeks; probably not.

The recent growth in capacity that we have seen in the United States appears to have plateaued with just under 100,000 more seats added this week. In the last week airline CEO’s in the US have been making really positive noises around the domestic market recovery as vaccine rates increase and the spring break season reaches its peak; bar tenders on Miami Beach would probably confirm how strong demand has been in the last week!

Looking at capacity by departing state in the US reveals just how strong domestic capacity has bounced back, particularly in Florida and to a lesser degree Colorado where supply is now back above pre-pandemic levels. However, some major states such as New York, California and Illinois remain between 50% and 30% below January 2020 levels, partly through tighter travel restrictions and also by a function of their domestic capacity linkages to feeding international flights.

Sadly, confidence around international capacity is not quite so strong. A look forward to the third quarter of this year reveals that airlines have in the last three weeks dropped over half a million seats from their transatlantic schedules. United Airlines account for the majority of those capacity cuts and they have been in recent times amongst the earliest carriers to adjust capacity cutting nearly 30% of their transatlantic capacity for the traditional peak third quarter period. It may be an “early call” but it’s also a reflection of the general market confidence around international recoveries this year; more and more airlines are now saying 2024 is the best hope for a full recovery; even that may prove to be optimistic.

With the top airline list showing as much change as the bottom of the premier league, Fulham are still in the bottom three if anyone is interested, rather than confirm that American Airlines are still the largest carrier in the world and that Iran Air are no longer one of the top twenty largest carriers (replaced by ANA) we have taken a look at those carriers that remain virtually stranded. Applying a minimum capacity of 100,000 seats being operated this week we have identified the “top” capacity losers this week compared to January 2020. Ten of the carriers listed are operating less than 25% of their normal pre-COVID capacity levels and in some cases such as Air Canada, Cathay Pacific and Singapore Airlines continue to have no real visibility around when services could be relaunched.

Such a list of global brands and market leaders stranded, just highlights how far many airlines still have to go before seeing a recovery. 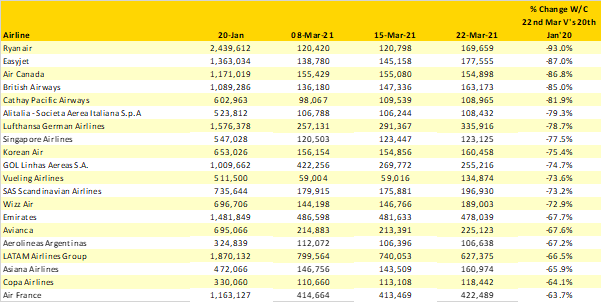 It does seem that those countries with higher levels of vaccine take up are looking to create travel corridors, combining travel passports with those high rates of coverage. If that is the case then a US – UK travel corridor may be possible sooner rather than later which based upon current trends will see Florida sink under the weight of visitors! Or perhaps an Israel – UAE corridor, who would have thought that twelve months ago or even more bizarrely a travel bubble from Chile to the United Kingdom; it’s a strange world!

The airline industry has always been irrational which perhaps makes it such a fascinating and exciting industry. In just seven days we have rocked and rolled from positive messages, accelerated vaccine recoveries to new lockdowns, vaccine rollouts being suspended and extremely positive comments around future demand. Any guesses at what this week will bring?