Optimism Breaks Out Around the World, Very Large Airline Capacity Increases Shaping Up from May

Optimism breaks out around the world as the capacity recovery is underway! Four million additional seats week on week may not seem that significant when in normal times global capacity was around the 106 million mark, but after four weeks of moving backwards a 7% week on week increase sounds like a really positive step. And it is, but airlines generally remain cautious about the coming months with a further 39 million seats removed by airlines through to the end of May; it may be the beginning of the meteorological spring, but we still have a long way to go in the recovery.

At the moment April holds has some 309 million seats on sale and May 380 million; looking at previous patterns of capacity cuts then April could end up at around 284 million seats which would be over 131 million more than last April; fingers crossed that the confidence we are currently seeing is not crushed in the next few weeks. 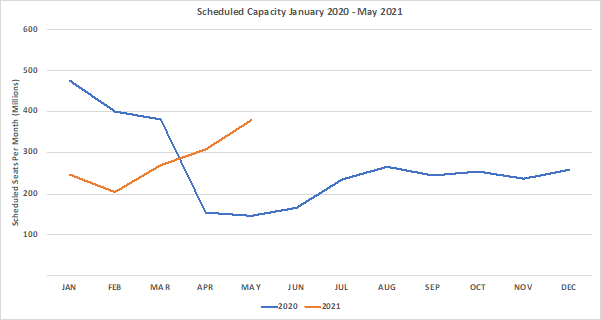 Before we get to April and May, we still need to work our way through March and the challenges of the recent week but even here there is some signs of a recovery. It’s a rare week when we can report that nearly every geographic region shows week on week capacity growth; only West and North Africa reporting slight declines prevents a full house of positivity. Nevertheless, major regional markets such as North & South East Asia both report week on week growth of over 10% and North America continues its recent pattern of growth, even Western Europe has managed a sneaky 4% growth week on week.

The increases in capacity in China continue after the sudden and dramatic cuts that were implemented over the Chinese New Year period with an additional 2.2 million seats added back with the majority of those for domestic services. However, the fastest growing country markets, at least in percentage terms this week are Indonesia and Thailand with growth of around 40% in each market. In contrast to those markets, two of the more stable markets throughout the pandemic in Japan and Vietnam are reporting weekly capacity cuts of 25% and 20% respectively as carriers continue to adjust capacity in line with latest infection rates.

Bizarrely, the United Kingdom, despite the latest threats of two weeks in a Premier Inn for travellers returning from “red list” countries, has crept back into the top twenty global markets with a week on week 6% capacity increase; much of which has come from easyJet adding back 8,000 seats and some more capacity from Tui.

Australia is also a market in recovery, at least from a capacity perspective; it seems that a fares war has broken out in the market coinciding with a week on week increase in capacity of 15% and some 125,000 additional seats. Qantas have added some 78,000 seats and Virgin Australia 45,000 and whilst it’s good to see such capacity growth, at least one of those two airlines are not really in a position for a fares war given what has happened in the last year but sometimes airlines revenue management is not always that rational.

When the second largest airline in the world adds some 9.5% capacity week on week they could in normal circumstances expect to reclaim the number one position; not this week! American Airlines added 10% more capacity and now have a “lead’ of some 16,000 on Delta Air Lines. The two carriers are however now a long way ahead of their nearest competitor Southwest Airlines with nearly one million seats less a week. I guess the key question of profitability remains one that doesn’t get asked by many people at the moment and with Delta apparently recalling pilots from furlough last week there must be plans for significant capacity growth in the coming months.

In China the staggering growth of China Express Airlines is built around the operation of regional services to secondary cities in China, frequently supported by regional government funding. The airline is the fastest growing airline over the last twelve months and has spectacularly bucked all trends and patterns; they are the true Covid-19 immune carrier! Equally immune are China Southern (+30%) and China Eastern (+19%) who this week both report capacity increases week and week although of course with very much changed network structures compared to last year.

Every week that passes brings us one week closer to the second quarter of the year and we are now only four weeks away from the start of the IATA Summer Season; the time of year when airlines traditionally make their profits. News of a possible date for unhindered international travel from the UK last Monday resulted in record levels of booking activity throughout the week, and hoteliers throughout Europe smiled at the thought of tourists returning with stored up cash to spend. We are still some ten weeks away from that freedom but the change in mindset is amazing, it’s incredible what hope can do for people and the airline industry!