Domestic Markets Diverging: Tracking the Way Back for 5 Key Markets

In a previous blog on domestic market recovery , we focused on the biggest domestic markets in the world, looking at whether there were common themes in how domestic airline capacity was recovering, or not, in China, the USA, Brazil, India and Indonesia.

This time, we take a look at some of the other key domestic markets – specifically Japan, Mexico, the Russian Federation, Australia and Canada - and consider how they are faring during the pandemic. All of these countries have a domestic market that accounts for between 60—70% of their total aviation market. Japan had the largest domestic market of these five countries, with 150m seats in 2019. The others are all similarly sized ranging from 65-80m domestic seats and international markets of around 30-40m seats. 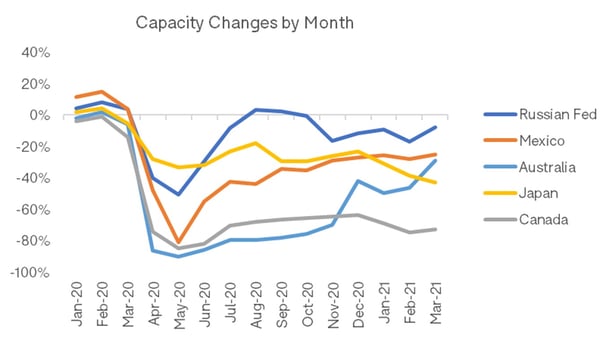 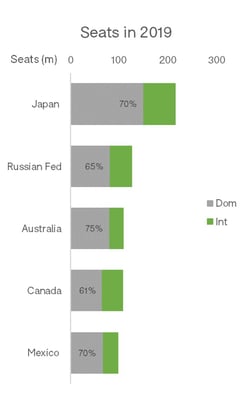 The effect of different strategies by governments in how they handle the pandemic seems very clear from looking at the resultant impact on domestic capacity. Each country has taken a different approach, with Australia closing borders early in the crisis and locking down domestic travel for a long period of time, with recovery only really beginning once the country had a handle on COVID in late October 2020. Over the last few months, Australian capacity has increased as permission to travel between states has started to return, with seats reaching their current level at one third below the capacity operated in March 2019.

Canada has adopted a similar approach, but recovery has yet to kick in fully with restrictions on travel between provinces remaining into 2021 and capacity in March 2021 remaining at 77% below the level operated in March 2019. Looking across the Top 20 largest domestic markets in the world, Canada is the third most affected still, with only Malaysia and Germany in a worse position.

52% of Malaysia’s capacity in 2019 was domestic, and only 22% of capacity in Germany is domestic. This potentially bodes well for Canada’s domestic tourism businesses if restrictions are relaxed to allow more domestic travel in Summer 2021, as there will be a huge amount of pent up demand for travel within Canada, particularly if international travel restrictions remain.

However, with only 2% of the Canadian population having been vaccinated as of the 25 March and a plan to reach full vaccination by September, the beginning of the recovery is still some way off.

Moving south, Mexico has adopted a different strategy, with very few restrictions on inbound travel and a steady recovery evident in the domestic market which as of March 2021 is sitting just 22% below March 2019 levels. Although the land border with the US is currently closed, air travel is still permitted between the two countries and there is no quarantine on arrival. Canadians however have been prevented from travelling to Mexico since January and the US introduced a negative test or self-isolate requirement at the same time, meaning there is more pressure on domestic tourism to deliver. Within Mexico, travel is still taking place relatively freely, with a traffic light system in place to indicate what degree of restrictions operate in each state.

The Russian Federation has been on a similar trajectory, although domestic capacity there now has almost recovered to 2019 levels, reaching just 4% below March 2019 capacity this March. Capacity did actually recover during Summer 2020 but dropped off again through the autumn and winter months as Russia experienced a second COVID wave. The sheer landmass of the Russian Federation means that domestic air travel is still essential and the authorities there have avoided the sort of national lockdown that has been implemented across many European countries.

Lastly, we come to Japan, with the largest domestic market in this grouping, and sitting right at the midpoint in terms of recovery. During the first wave of COVID, Japan’s domestic market only fell by a third, reaching -33% below 2019 levels in May 2020, although this was understated to some extent as the average cancellation rate reached 25-30% at times in Japan during 2020. Since September 2020, capacity has fallen back again, following a second wave of infections in and around Tokyo and the introduction of restrictions on domestic travel to the capital. Ongoing challenges with the level of COVID cases in Japan mean March 2021 capacity is now sitting at its lowest point below 2019 levels, down by 43%.

What is clear is that there no one size fits all approach in how domestic markets will recover from the impacts of the pandemic. It seemed to the industry earlier in the crisis that domestic markets may offer some protection to a beleaguered industry, but the range of responses – and continued depression of some very large domestic markets such as Canada - seen in just these five markets demonstrates the challenge ahead.

In an attempt to tease out some of these differences further across domestic markets, we’ve mapped domestic capacity levels against the rate of COVID deaths and population size to see if there are any commonalities across countries. What becomes evident is there are broadly 4 clusters of countries. 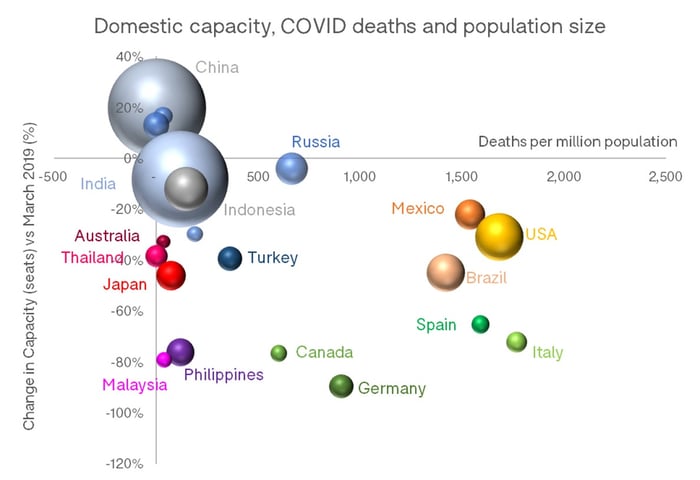 Firstly, there are those that appear to have COVID under control and capacity is recovering – such as China, India and Indonesia, then a second group where deaths per million have been very high so there has been a big impact on the population and consequently domestic capacity is far from recovered – Spain, Italy and to some extent Germany and Canada feature here. The third grouping are those countries where the death toll is high but governments have prioritised remaining open and personal freedoms and so domestic capacity is recovering – this includes the USA, Mexico and Brazil to some extent. The last grouping of countries are those where the impact of COVID in terms of deaths has been relatively low, but countries are taking a cautious approach to reopening travel – including Malaysia, the Philippines, Japan, Australia and Thailand.

To what extent we will see the scale and pace of progress on vaccination begin to impact on these positions isn’t yet clear, but it is likely to continue to shape how domestic markets recover in 2021 and beyond. Theoretically once a country reaches a certain level of vaccination for its population or indeed achieves herd immunity for COVID, travel could recommence without restriction, particularly domestically, but those countries who have implemented tighter restrictions on travel are likely to remain equally cautious on unwinding those restrictions. The knock-on effect on demand of that caution is also as yet unknown, particularly for domestic business travel.