Summer Holidays in Spain: Should we be Relying on Vaccines?

The annual surge in summer visitors to Spain pre-COVID may have resulted in complaints of over-tourism but the reality of a second summer season with massively reduced numbers of visitors will inevitably be a stark reminder of just how important tourism is to the country. Spain has been one of the world’s top tourism destinations for many years, receiving as many as 84 million tourists in a year, and it’s no wonder that Spain has been pushing its European Union partners for the introduction of vaccine certificates to help enable free movement across the Union’s 27 member States. With vaccine rollout hampered by access to vaccine supplies, a Digital Green Certificate has been proposed by the EU instead which would include vaccinations as well as negative COVID-19 tests and recovery from the virus itself.

This is all well and good but just how fast is vaccine roll-out happening? The EU goal has been to have 70% of the population vaccinated by the end of the summer but a combination of sluggish roll-out, a shortage of supplies and vaccine hesitancy, a term used by health authorities to describe a delay in acceptance or refusal to have the vaccine among the population, makes this look increasingly unlikely.

As of 18th March 2021, 9.8% of European adults aged over 18 in the EU had had their first dose of the vaccine. This is 10 weeks into the programme. Another 10 weeks takes us to the end of May, and a further 10 weeks takes us to early-mid July, a point where Europeans with families will be looking to get away. At the current rate of vaccination, the EU might reach 30% of adults being vaccinated by then.

Contrast this with the situation in the UK, now outside the European Union. By this week 45% of the population of England aged over 16 had already been vaccinated with at least one dose, and the UK is on track to vaccinate all adults by June.

The UK market is extremely important for Spanish tourism; there were 18m visitors to Spain from the UK in 2019. While the French can readily drive across the border, Brits are more likely to fly. In August 2019, Brits made up 27.9% of all arrivals by air in Spain, getting close to a third. The peak day in August 2019, Saturday 17th August, saw 1,098 scheduled flights between the UK and Spain, with over 100,000 seats in each direction which goes to underline how big this market is. That’s the equivalent of more than 1 flight every minute between 6am and 10pm! 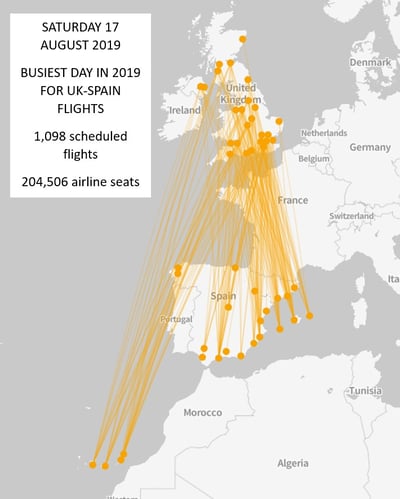 It’s no wonder that airlines are scheduling on the basis that agreement will be found to ensure some of this market can return this summer.

Mixed messages from Spain indicate that Spain may open to the UK when the vaccinated rate within its borders reaches 30-40%, but there are also indications that rules may be relaxed after 17th May. This is a key date in the UK Government plan for opening up the economy, and the earliest date for allowing international travel. Of course, it could be argued that the proportion of the vaccinated population needs to be high in both the origin country and the host nation before travel is allowed, though this would ensure that the re-opening of international air travel would be delayed further still. The date of 17th May has clearly been seen by airlines as key and the current schedules show a huge ramping up of capacity from 17th May with easyJet, Ryanair, Jet2.com, TUI and airlines in the IAG group (British Airways, Vueling and Iberia) all piling in. 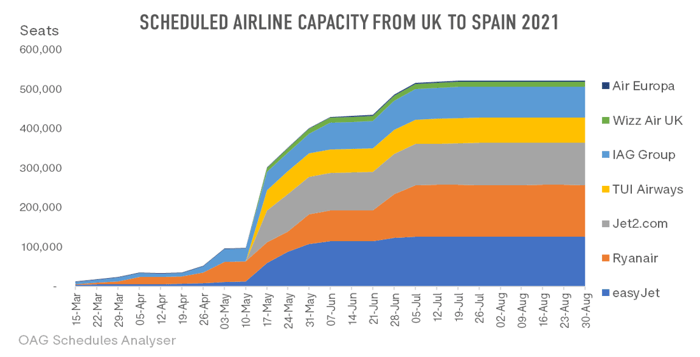 If these airlines really do manage to operate half a million seats in each direction each week through the summer, it won’t quite take the market to the scale of August 2019, but it won’t be far off. They’ll have taken the market from just 7% of what it was operating two years ago in mid April to 83% by July! The high UK vaccination rate will, no doubt, have been a factor but so too will political will, pent-up demand and an airline business ready and waiting to take to the skies again.