The Complexity of Making an Airline Route Fuel Efficient

Does it matter when airlines operate different aircraft types on a route?

In this, the second in a series of blogs about how aviation data can be used to support greener decision-making, we take a look at some of the reasons why airlines can’t always use their most efficient aircraft on a route, and whether this is or should be an issue for travellers choosing which flight to take. While those in the industry will know that the fleet mix for each airline is unique, with some airlines operating much newer and more fuel efficient aircraft than others, this information isn’t readily available to consumers if they wanted to factor it into their choices.

Here, we ask whether it should matter to a traveller whether an airline operates multiple different aircraft types on a route. Would it help consumers if they understood more about the relative performance of each aircraft or would that information be meaningless without an understanding of the other factors at play in airline fleet and network decisions?

The analysis draws on new data about fuel burn by aircraft. In 2020 OAG’s Data Science team started work on a project to better understand the environmental impact of flying to ensure OAG continues to provide additional value and insight from flight information data, especially in this increasingly important aspect of airline operations.

The role of choice editing

In sustainability circles, the use of the phrase ‘choice editing’ has become more prominent in recent years and refers to how less sustainable choices are no longer made available to consumers. In reality, any supplier which offers a limited range of options can be said to be editing the choices available; think of the supermarket which has moved over time to primarily offer ‘own brand’ products. The logic of choice editing in sustainability is that consumers shouldn’t have to be concerned with making the ‘right’ choice but that companies should take responsibility for what is available in the first place.

When it comes to flying, the type of aircraft operated on a route has played only a limited role in consumer choices until now. Anecdotally, passengers have a preference for Emirates A380’s over the B777 on routes between Dubai and the UK, and business travellers prefer jet aircraft over turbo-props, but in general aircraft choice ranks far below ticket price, schedules and loyalty programmes – and when it is a factor, it is usually driven by preferences for cabin layout or pitch.

Going forward, as the profile of climate change concerns grows, should we expect consumers concerned about their environmental impact to care more about the aircraft type and its green credentials? While it may be possible to provide consumers with information which allows them to make greener flight choices at the point where they are searching for flight options, perhaps a marker or a code based on a mixture of fuel burn for the aircraft type, on the distance to be flown and the typical load factor achieved by the airline, but it seems unlikely they will actively seek out certain aircraft types themselves. Rather, they will expect airlines to have made the choice for them by making the most sustainable fleet choices.

But fleet changes don’t happen overnight. The process of bringing in new, more efficient aircraft and phasing out older aircraft, takes time but is a form of choice editing. The motivation of airlines may be more about keeping operating costs low, but the effect is the same – more fuel efficient aircraft flying.

We analysed routes and airlines where more than one aircraft type is typically operated and considers the impact of one aircraft over another and the extent to which airlines are moving towards more fuel efficient aircraft on a route. The fuel use data is taken from January 2019. While this predates the pandemic it allows the analysis to include a range of routes by distance, by airline and by geographic region at a time before aircraft were being parked in large numbers and network planners were juggling how to mix aircraft and routes across their whole fleet and network.

The London Heathrow to Miami route for British Airways is a good example of a high-volume long-haul route which, because of the capacity constraints at Heathrow, warrants a certain type of aircraft. 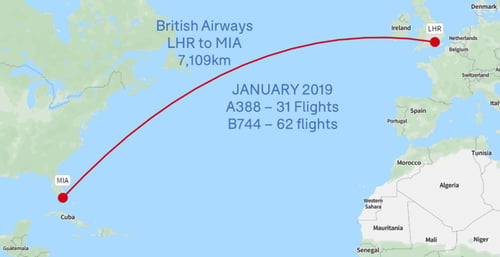 The A388s were larger with around 470 seats compared to 337 on the B744s. They also used more fuel, typically 124 tonnes per flight compared to 100 tonnes for the B744. Putting the combination of seats, and fuel burn together and the B744s win over the A388s for fuel per seat.

However, both aircraft types are now older and with fuel burn that compares unfavourably with newer aircraft such as the Dreamliner. It should come as no surprise therefore that since the summer of 2020 the airline has made fundamental changes to this route. First, the B744s were retired and then, after a period when there were no operations at all between April and June 2020, the route returned with mostly B789 aircraft. The choice and changes of aircraft type on this route may have had more to do with maximising slot use at Heathrow and the need to cut costs, but the net result is a more fuel efficient operation.

Sometimes an airline chooses to use an aircraft which might not be the obvious choice for a route, but can still move towards using the most environmentally conscious choice. Take the route between Jakarta and Singapore. It’s a relatively short route at 883km but Singapore Airlines carried over 800,000 passengers back and forth in 2019, enough for 3 wide-body aircraft in each direction every day. The airline has been using a mix of mainly B777-300ER and A350-900 widebody aircraft on this short route, able to squeeze the rotation in between longer haul flights within a 24-hour cycle, allowing it to offer a Premium product on its busiest route and reducing the number of slots required at the congested Jakarta Airport.

At the start of the global pandemic the aircraft that stop being used on the route were the older B773’s although it appears that longer range B777-300ER’s (77W) are making an appearance in the schedule in March 2021, although that may be more to do with the process of returning inactive aircraft to the fleet given that 22 of the 27 77W’s in the Singapore Airlines fleet are currently inactive.

OAG calculations showing that fuel used per seat flown is around 40 litres, which is significantly more than the fuel per seat on the London-Miami example used above. This may not be a route where travellers are particularly interested in making active environmental choices about which aircraft they fly on but Singapore Airlines has now effectively made that choice for them and it is the more fuel efficient aircraft. The average age of the Singapore Airlines fleet may be less than 4 years old, according to CAPA, but with no narrow-body aircraft in use or on order, the higher fuel consumption of wide-body aircraft on short routes will continue.

The pragmatism of fleet planning

There are plenty of other examples where airlines do not appear to be using the most fuel efficient aircraft on a route. There is usually a reason; it takes time to update a fleet with newer aircraft and the older aircraft have to be placed somewhere if they are flying, and large aircraft are often needed at slot constrained airports.

Turkish Airlines operated a mix of A321 and A332 aircraft on its Istanbul-Kuwait route back in January 2019. Of the two aircraft types, the A321 was using about 10% less fuel per ASK than the A332 but over time the larger A332 aircraft is the one that has increased its share of capacity in the route. 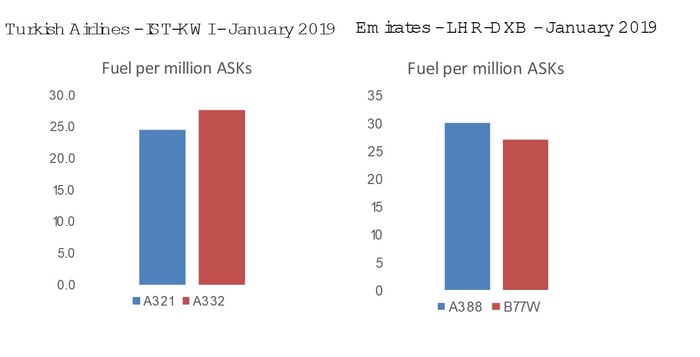 On Emirates route from London Heathrow to Dubai the reverse is true. Back in January 2019 there were only 2 B777-300ER (77W) operations but 186 A380-800s, even though the 77W was the more fuel efficient on the route. In May 2020 when the floor fell out of the market, Emirates stopped flying any A380’s on this route and switched to the 77W and as it started to reintroduce the A380 it kept some 77Ws on the route. In this instance part of the decision will simply be about the size of the aircraft and the need to operate the smaller aircraft when passenger demand is weak. This is evidenced in the aircraft that Emirates has parked: just 5 of the 151 77W’s are currently inactive compared to 104 of their 118 A380’s.

For some airlines, and especially those large, established legacy carriers with a diverse fleet, the tendency can be to continually change the mix of aircraft used on a route. Take the Delta Air Lines route between Atlanta and La Guardia as an example. This is Delta’s second busiest route, or at least it was before the pandemic.

Over the 27 months since January 2019 the airline has scheduled 17 different aircraft variants to operate the route. The mainstay of the route has been the A321, the B739 and the B757 with no two months the same in terms of the total number of flights or the mix of aircraft.

The OAG analysis for January 2019 when mostly A321 and B737-900 aircraft were used showed the Boeing aircraft to be the more fuel efficient, but the constantly changing mix of aircraft being used on this route would indicate that overall network operations are about much more than fuel efficiency. 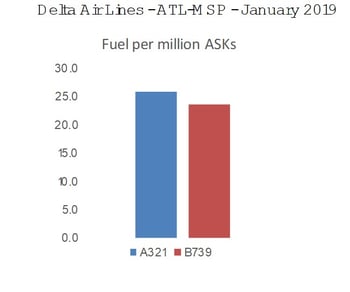 Is it just that younger is better?

It seems unlikely that either travellers or airlines will want to draw attention to the variance in carbon footprint for different aircraft types operated by the same airline on the same route. But the reality is that this is an issue mainly for legacy carriers. They, much more than low cost airlines, tend to have diverse fleets and individual routes may operate with one aircraft type one day and another on another day.
In contrast, Southwest Airlines, Ryanair and GOL operate with fleets comprised entirely of B737 aircraft while AirAsia, Volaris and Wizz Air fleets are made up almost entirely of A320s. The issue doesn’t arise with them. What this means is that for some of them, at least, they can condense marketing messages about how green their fleet is into simple statements about the average age of fleet.

About the OAG Data Science team

Established in 2019, through leading edge technology, the team specialises in using predictive analytics, processes, and algorithms to deliver additional value and insight from flight information data. The team partners with key industry organisations to trial, test and bring new initiatives to life.
If you would like to know more about existing and future projects, please contactus@oag.com