Fleet Changes with COVID-19: Time for the New

This month global scheduled airline capacity (seats) is down by 47% compared to a year ago, before the impact on aviation from the COVID-19 pandemic began to make itself felt on air travel. The number of flights operating is down slightly less – by 45% - showing that, on average, airlines are flying slightly smaller aircraft where they are flying at all. Average aircraft size at a global level is down from 146 seats a year ago to 141 now. It’s not surprising that airlines have adjusted the composition of the fleet they are putting in the air. With demand falling off a cliff, excess capacity everywhere, and airlines working hard to preserve cash while keeping as many aircraft as possible in circulation we’d expect to see priority given to smaller and newer aircraft.

Not all airlines have had the same ability to make these adjustments as others. It depends on the mix of aircraft in their fleet. Across the board two families of aircraft made up the workhorses of airline fleets prior to the pandemic; the Airbus 318/319/320/321 family and the Boeing 737 family, with the former contributing 38% of all scheduled capacity worldwide this time a year ago (February 2020) while the latter made up another 29%. These are the aircraft predominantly used by low cost carriers but that’s not to say there aren’t plenty in the fleets of legacy carriers too. 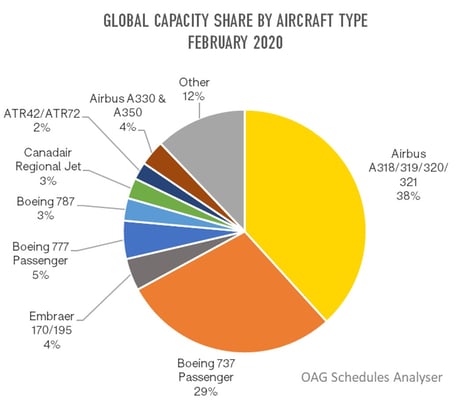 Across the Top 10 most frequently used aircraft types, some have clearly seen a reduction in use with the pandemic more than others, while others have clearly proved to be more useful in these difficult times. The two largest family groups have gained market share so that the A318/319/320/321 group now make up 41% of capacity while B737 aircraft make up 32%. Overall, their share of capacity has increased by 6%.

ATR’s, while only contributing 2% of capacity a year ago, have also performed relatively well and have seen their share of seats in the market grow, as have A350’s and, to a lesser extent, B787 Dreamliners and Canadair Regional Jets.

The aircraft which have fallen out of favour most are the larger, older aircraft such as the B777 and A330. They’ve seen capacity fall by 66% and 71%, respectively, between February last year and February this year, while the A340 has seen capacity fall by 78% and the A380 by 97%. Unfortunately for the A380 operators, the types of routes they were purchased to fly are those most adversely affected by the changes in air travel brought about by the virus – long haul, international and connecting journeys. As of this month, only 4 of the 14 A380 operators from a year ago were actually flying any of these aircraft and these are Emirates, Asiana, Korean Air and China Southern Airlines. Over half of all A380 flights were being flown by Emirates prior to the pandemic and A380’s made up 41% of their capacity, with all the remining seats flown on B777 aircraft. The list of airlines which are keeping their A380’s on the ground seems long and includes Singapore Airlines, Qatar Airways, Etihad, Qantas, British Airways, Lufthansa, Air France, Thai Airways and All Nippon.

What about smaller aircraft? The E170/195 class of planes were the third most prolific a year ago, contributing 4% of global capacity and 7% of scheduled flights. Today, their share is barely changed although, of course, capacity is down by 47% in line with the industry as a whole.

When we look at the Top 20 airlines to see how they have adjusted their fleet capacity, there is wide variation. Ryanair and easyJet are flying a fraction of their previous flights. With effectively single aircraft fleets there is no room for these airlines to adjust the mix of aircraft in use. Rather, their response to massive market restrictions across Europe and especially in the UK which is a key market for them, has simply been to stop flying and keep unwarranted costs as low as possible. British Airways, while having a fleet with almost a dozen different types of aircraft, has also taken a drastic approach to reducing operations. Lufthansa’s approach seems similar. For these airlines, the reduction in seats or broadly similar to the reduction in flights pointing to the fact that there has been less tweaking the schedule to operate smaller aircraft.

In contrast, in North America we see that for a number of the largest airlines the reduction in flights has been less than the reduction in seats. In other words, average aircraft size has increased! This is the case for American, Delta, Southwest, Air Canada and JetBlue. Why is this? If we look at American Airlines, it is in large measure to do with the change of seat configuration of their 737-800 aircraft which have been reconfigured to their MAX aircraft with 172 seats instead of the previous 160. They are also flying a higher proportion of A321’s now (185 seats) and fewer A319’s (128 seats). Similarly, at JetBlue, the fleet mix has changed so there are relatively more of the 200-seat A321’s flying and fewer of the 157-seat A320’s.

The story at Air Canada is more complex. The overall aircraft size has increased through a combination of changes. The new 169-seat B737 MAX aircraft have returned to the fleet as have the new 137-seat A220’s while the older 269-seat B767’s have been grounded. Smaller aircraft (<100 seats) make up a larger proportion of the fleet but so do Dreamliners with 255-298 seats. 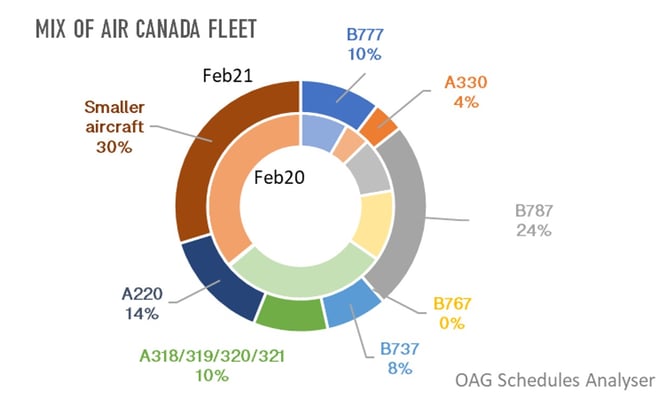 What this does say, however, is that these are times when the benefits of operating newer, more fuel efficient aircraft are coming to the fore in fleet decisions. Older aircraft are being retired early and grounded sooner. As airlines work to recover and build cash once more, the arguments for operating new aircraft will be strong.