The Perfect Moment For Disruption

If you have over 100 aircraft scheduled for delivery in 2020/21 and a further 106 that are currently inactive then you have plenty of capacity. But where do you operate those aircraft? Southwest seems to have found part of the solution with their recent announcement of entering the Chicago O’Hare (ORD) and Houston Intercontinental (IAH) markets from early next year.

It’s a bold, brave and potentially brilliant strategic step by Southwest at a moment when competitors will struggle to respond. But what’s behind the move and what does the data tell us about Southwest’s plans.

Both Chicago O’Hare and Houston Intercontinental rank in the top twenty US airports for domestic capacity this week in fifth and sixteenth place respectively. Across the current twenty largest airport markets in the United States, Southwest already serve sixteen of those airports and in many cases with a significant share of capacity as the table below illustrates.

At six of those sixteen airports Southwest serve they operate over 30% of the total airport’s capacity and in two cases; Washington Baltimore and Chicago Midway over 75% of all capacity. However, and importantly and contrary to perhaps wider perceptions Southwest operate with less than ten percent of domestic capacity at six airports suggesting perhaps that they do not need to dominate a market to be successful. 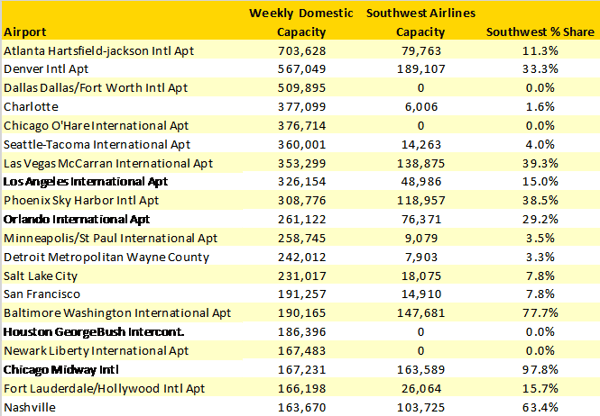 Given that Southwest have so many aircraft scheduled for delivery filling the gaps in the top twenty domestic markets makes sense, particularly when your competitors are in a relatively weak financial position. Of the four ‘gaps’ Newark has already been tried and dropped leaving just three markets and indeed perhaps the question should really now be when will Dallas/Ft Worth International be announced to complete the coverage?

So, with Chicago O’Hare and Houston Intercontinental about to be added the question is what markets are Southwest likely to launch and that become a question of joining the dots…

The classic development strategy of many low-cost carriers around the world is based around joining the dots; essentially adding new markets to their major bases to both ensure optimal efficiency from a network and operational perspective but also to leverage market position and in some cases connectivity.

In the table below we have listed the top twenty US domestic airports for Southwest and then compared that to the current weekly capacity from both ORD and IAH to those Southwest airports.

Depending on the level of appetite that Southwest have for developing services there are two potential strategies; either identify those destinations currently with limited capacity to the Southwest destination or equally at the other end of the spectrum enter a battle for market share on the densest routes from a capacity perspective; so which would you choose? 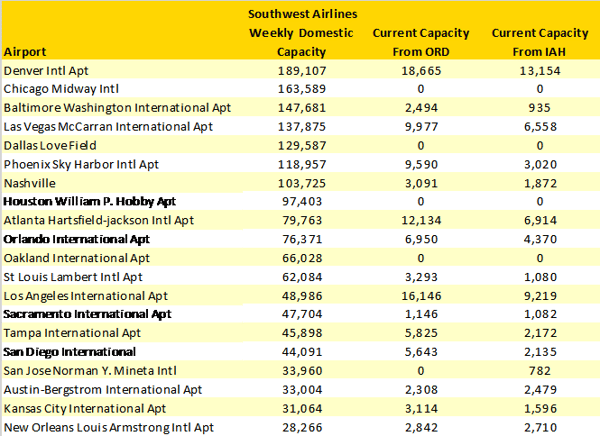 Could Traffic Mix Be A Important Factor

Southwest Airlines developed the low-cost model and whilst they do have a reasonable proportion of connecting traffic their business model is all about point to point. Therefore, in any consideration of the markets it is likely that Southwest will have looked at the traffic mix, especially across the largest markets from ORD and IAH and those with the largest proportion of local market content would be of most interest. Again, taking the top ten markets in both ORD and IAH and using 2019 data we have extracted the percentage of local traffic and identified those with the highest proportion of local demand.

Applying the local market content rationale then the most obvious markets for opening would appear to be Las Vegas and Los Angeles with of course Newark attractive but an already “tried and failed’ option for Southwest.

The alternate strategy for Southwest is to focus on those airports with a relatively small amount of capacity from either O’Hare or Houston Intercontinental where the airline has a sizeable existing operation. From Chicago and Houston markets such as Baltimore, Nashville, Oakland and Sacramento look interesting and would of course allow the airline to double down in terms of marketing effort for the new services.

Clearly Southwest will have done their homework and have a very clear plan of both phase one and phase two routes that can be launched from both airports and data analysis such as the outline thinking here will have contributed to their final decisions. Typically, Southwest enter a market and develop services rapidly to secure the critical mass necessary for their business model to work and this will be no different; quite what the response will be from the incumbent carriers will be very interesting.

Perhaps more intriguingly this is perhaps the first development in a range of network changes and structures that will play out across not only the United States but in other markets where an airline has a record of challenging competitors’ networks.

Will Europe be next to see something similar?