For a while I imagine many of us assumed this would be so: The more people were vaccinated the more we’d be able to fly where we want. However, the data seems to show that it isn’t quite that simple.

At OAG we’ve been looking at the correlation between vaccination rates by country and international air capacity for each country relative to where capacity was two years ago. What we see is that vaccination rates in and of themselves are not a guide to how easy international air travel is. It’s clear that government policy (or lack of it) is a much more important determinant of airline recovery.

Greece and Mexico are two countries which either resisted travel restrictions or have sent out consistent messages about being open for travel. As a consequence, international airline capacity is now exceeding the levels achieved two years ago. Both have made inroads into their vaccination programmes with 40-60% of the population having had at least one jab, according to Our World in Data (23-08-21), but there are numerous other countries with higher vaccination rates but less air travel taking place. 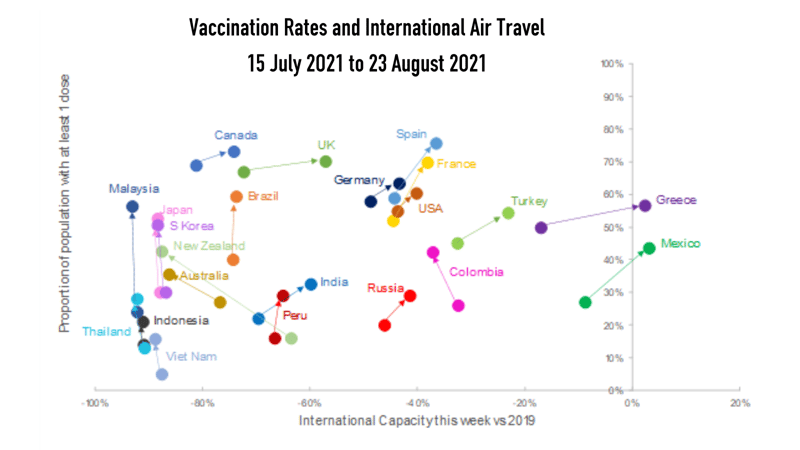 Broadly, countries can be categorised into a number of groups according to where they appear on this chart, although this is simplistic and doesn’t allow for the nuance there is between the approaches taken by each country.

In the top right quadrant there are a group of countries, France, Spain, Germany and the US, where vaccinations rates are reasonably high and international airline capacity is doing better than average. Over the past 6 weeks each of these countries have moved further up and further right on the chart, as vaccinations rates have risen and more international air services become available. These are all developed countries that were quick to acquire supplies of vaccines and were in a position to roll out programmes. The European countries initially imposed plenty of international travel restrictions but have eased those as the peak summer 2021 season approached, especially for intra-European travel which is a major part of normal travel patterns. The US, where domestic travel has bounced back reasonably well, has seen plenty of international travel to and from Mexico in particular, and some parts of the Caribbean.

In the bottom right corner are the countries like Russia and Colombia where international air travel has continued despite a slow vaccination roll out. Admittedly, most of the international flights available are to a relatively small group of countries. For Russia this is Turkey, Ukraine and some of the former Soviet States. For Colombia the primary market is the USA. Clearly, where major traffic flows exist between two countries both with fairly unrestrictive approaches to air travel there is more capacity. While vaccination rates are improving in each, international airline capacity to and from Colombia has reduced over the past 6 weeks.

The third group of countries, as shown in the bottom left quadrant, are those where there are limited international flights taking place and vaccination levels are also low. In some of these countries vaccinations rates have been rising rapidly but these same countries - Australia, New Zealand, Malaysia, Japan and South Korea - have taken a zero-case approach to covid, locking down wherever a cluster appears. An early sense that this was an effective solution to keeping covid-19 at bay has now made it hard to change the narrative that could enable more international air travel as it will almost certainly be accompanied by higher rates of infection. In fact all these countries have seen international air capacity fall over the last six weeks despite rising vaccination rates. Other countries in this quadrant such as Thailand, Peru and Viet Nam, have experienced high rates of infection but the difficulty of achieving high rates of vaccinations have kept air services restricted.

The final quadrant containing countries in the top left of the chart is perhaps the most puzzling. Both Canada and the UK have relatively high rates of vaccination but remain well below average for the amount of international air travel which is possible, although this may, at last, be changing.

What is clear is that there is no clear relationship between growing international capacity and rising vaccination rates. While capacity appears, in general, to be improving gradually and, at the same time, the proportion of each population with at least one dose of vaccine is rising, it is absolutely not the case that a country where more people are vaccinated is also closer to recovery in international aviation. What the chart doesn’t show is the prevalence of covid-19 in each country, or the ability of a country to cope with infections, or even the importance of international air access for the economy through tourism or trade. Each country shown is steering its own course based on a whole range of factors not least of which is domestic sentiment around lockdowns and the need to control spread of the virus. What this chart does is highlight the very wide range of responses to the pandemic.

Greece - A Summer of Love

Why Are Airlines Offering Flights to Nowhere?