The news that China shut down much of its domestic aviation market at the beginning of August in response to another wave of COVID, seemingly triggered by an infected passenger who arrived from Moscow into Nanjing Airport, does not bode well for other Asian countries battling to shift from crisis to recovery mode.

The Nanjing outbreak has now spread to 17 provinces across China and takes place during the peak period for domestic leisure travel. Last week, China saw domestic capacity reduce by almost one-third, with 5m seats taken out compared to the previous week as carriers shut down parts of their domestic networks. This is not the first time domestic capacity in China has fallen swiftly; back in February capacity dipped at a similar amount, almost one-third, following an outbreak in Shanghai. That time it did bounce back very quickly as the outbreak was contained. Since then domestic capacity has been running at almost 20% above 2019 levels. This week, a little capacity has been added back, but capacity remains 24% below the same week in 2019. 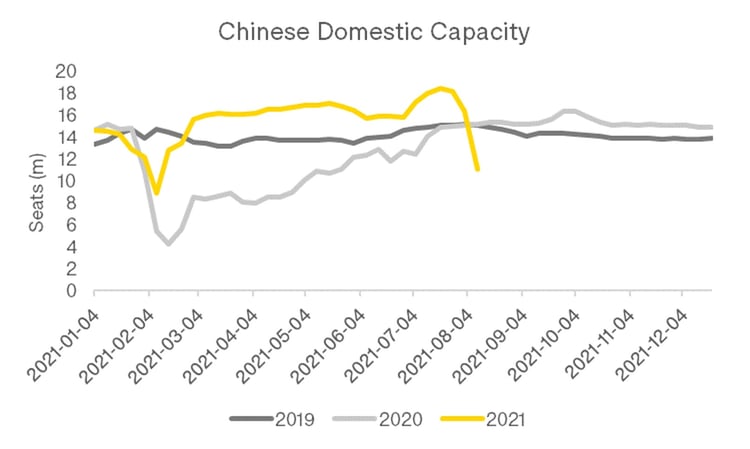 China is the largest country still adopting a zero-tolerance approach to COVID, in a similar manner to countries such as Australia and New Zealand. Whilst it has been effective thus far with very few cases in China over the last 12 months it remains to be seen whether this approach is sustainable in attempting to keep a lid on COVID at a time when other countries are beginning to treat it as endemic. The approach taken by China, and others, may be effective in the short term in reducing cases, and deaths, but with millions of people living under lockdown-type conditions for extended periods, the long-term societal and economic costs may be too high.

The latest restrictions, said to be in response to the threat posed by the Delta variant, have resulted in all 31 provinces in China urging citizens not to travel to medium or high risk COVID areas, or leave their provinces unless necessary. Looking at reductions by province between last week and this week shows a range of responses in terms of capacity being withdrawn. Hebei province saw capacity fall by just 14% last week whilst the neighbouring province of Henan saw a reduction of 62%. Of China’s biggest airlines, China Southern faces the greatest capacity reductions week on week, with 50% of seats having been taken out of its schedule last week. This equates to the carrier operating 1.4m fewer seats on the previous week. China Eastern has reduced capacity by around half that amount, totalling 0.7m seats and Air China 0.6m. 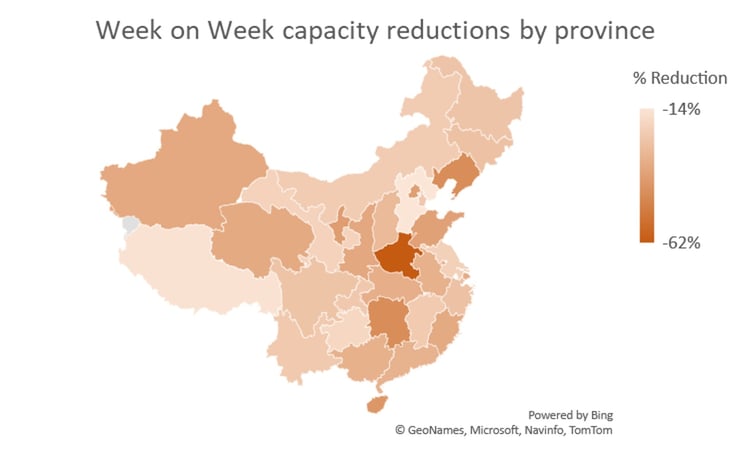 What does this mean for Asia?