Joining The Dots But Missing The “T’s” Socially Distancing Whilst Connecting, A Complex Issue

There is growing optimism around an aviation recovery; in the UK it’s almost proportional to the rate of vaccinations and that optimism is beginning to be felt elsewhere with confidence being reinjected into the travel and tourism sector. There is still a very long and difficult journey ahead but at last there may be some better news and quite frankly anyone inside the aviation bubble will have expected the first quarter of the year to be awful; just not this awful.

It has become commonly accepted that domestic markets will recover first followed by regional international markets. In the case of the very large domestic markets, it could be argued that domestic capacity has probably been as strong as it could be allowing for the absence of any international connectivity. Certainly, the CARES Act in the United States and central government support in China have provided protection to local carriers.

Regional international capacity has been identified as second in the recovery with some short-lived openings in Europe, Latin America and Africa confirming that very point. Sadly, many of those bubbles have burst, corridors been closed and in the case of Ireland dental appointments missed as “essential treatment” switched to Tenerife; coincidentally the latest way to try and get a dose of vitamin D. The speed with which regional international demand will bounce back remains the great unknown but in Europe airlines are certainly doing all they can to stimulate demand and tour operators are reporting better than expected bookings and yields for Summer 2021.

Expectations for a long-haul recovery appear to be not quite so high, certainly in the first three-quarters of 2021 although there are some incredible fares on offer even in peak months from airlines. Indeed, for those able, turning left at the aircraft door seems like a bargain at the moment even from the most expensive carriers in the world. Make no mistake, long-haul travel will return; there are simply too many stranded expats, families and bucket list travellers waiting to be able to book a flight. But with that recovery comes an interesting dilemma that the industry has yet to really work through and it could be expensive for both the airlines and the travellers; and that issue is Minimum Connecting Times or MCT’s.

In every transfer market the connecting time is crucial, the shorter the connecting time then the shorter the elapsed journey time and the higher the position on the distribution system screen. And for many years the convention was that the higher the position then the more likelihood of a sale; pricing now had a greater influence but nevertheless airlines want to provide the quickest journey from A to B. However, some of those principles are likely to be challenged along the road to recovery as new processes are put in place.

It’s a contradiction, to socially distance when connecting; but it will become a real challenge for airlines and airports in the coming months as demand rebuilds. The principle of a hub airport is pretty simple, feed in as many flights as possible in a short period of time, connect them to a series of flights departing perhaps an hour to two hours later and then give all the staff an hour or two off before repeating the exercise again. Simple and very effective; but possible in the new “normal” world of travel, perhaps not.

The logistics of handling thousands of connecting passengers in a few hours are complex at the best of times but adding requirements for more detailed health screening, checking of vaccination passports whilst keeping sufficient distancing between passengers will add new levels of complexity. It is very likely that MCT’s will have to be extended; at least in the short to medium term as we learn to adapt and live with Covid-19. Are such changes important, does it really matter, perhaps an extended stopover of another hour will not make much difference; well, the answer is yes, that hour could make all the difference.

The “Kangaroo Route” from London to Sydney has historically been an iconic routing with many airlines operating either one or two stop services for decades and fighting over valuable sixth freedom traffic. What many people do not understand is that it is one of the most time sensitive services from an operational perspective and below is an example of how vulnerable that schedule is.

Taking a typical day in 2019 and using OAG’s Connections Analyzer we have identified the fastest schedule for the 18th February and summarised the key points below. By any standards this is a very efficient connection, one hour in Singapore and the onward flight to Sydney departs and as such a very attractive connection for any traveller.

But, what happens when that MCT is perhaps extended out to two hours? A slightly later arrival in Sydney would not seem too damaging, perhaps a few missed connections to domestic destinations but on the face of it nothing too serious. However, in this example SQ 241 appears to return back to Singapore as SQ 242 at 19:10 after a very quick and effective 75-minute turnaround. For Singapore Airlines this is an effective piece of asset utilisation whilst for the passenger an amazingly effective connection from London. But what happens when that turnaround is extended to perhaps three hours with every arriving aircraft in Australia having to be deep cleaned to comply with the authority’s requirements, and no country is more rigorous than Australia in that area. At that point this connecting service and return to Singapore begins to unwind. 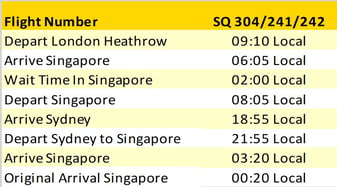 And to make that even worse the subsequent departure of SQ 304 at 09:10 is no longer possible, breaking the connecting chain back in Singapore.

If nothing else this one example highlights the complexity of scheduling and if you are still following the logic, then well done! Any change in connecting times, turnaround processes and control authority requirements can have a huge impact on airlines who have to balance commercially attractive scheduling with asset utilisation and the heavy cost burden of having to use more aircraft to deliver the optimal schedule. And that is when it’s easy, but in the case of Australia it could be even more complex.

It is normal for many international airports to have an operating curfew; in the case of Sydney this is generally from 23:00 to 06:00 local although there are exceptional circumstances when that may be waived. Regular daily services are not classified as exceptional! Now, if there is a three-hour minimum turnaround requirement at Sydney then that means every scheduled international flight arriving intending to turnaround the same day will have to arrive before 20:00 or indeed earlier to err on the side of caution. For some airlines this may mean having to adjust large parts of their network, reschedule large parts of their connecting banks and in some cases change their slots at heavily constrained airports such as London Heathrow, Paris and Frankfurt.

In the new “normal” aviation world few airlines will be able to absorb the impact of time lost to increased passenger processes without passing that cost through to the passenger once demand has returned to normal levels. Potentially aircraft utilisation will fall, and, in some cases, additional aircraft will have to be allocated to the route to cover the programme and that is very expensive.

The other option is that connecting times are extended out further and schedules “worked around” maintaining the current slots held, especially at those very congested airports; an option that may be slightly more palatable on the pocket but equally numbing on the backside!

The art of scheduling and network planning has always been fascinating and fraught as planners chase different time zones, optimal arrival times and seek to secure a prominent position on the first screen of the distribution systems. All of those issues remain top of the mind for any airline that relies on connecting traffic, but thanks to Covid another layer of complexity is likely to be applied, at least in the short to medium term.