Hainan Island in China, along with its airports, has seen a duty free shopping boom while high spending Chinese travellers have been unable to travel overseas. Thanks to changes in rules which allow locals to make use of sizeable duty free allowances, the subtropical beach destination has provided an outlet for the desire to shop. We know that many countries have seen domestic travel return sooner than international travel, but are there other Asian destinations which, like Hainan, have been able to use the draw of a bargain to attract visitors?

We compare what has happened at Hainan with Jeju Island in South Korea as well as Okinawa and Macau. What lessons might there be for other destinations and airports in adapting to a crisis?

Airports around the world have been hard hit by the loss of international travellers, not just because of the fees airlines pay to land and bring those travellers into the terminals, but because of the non-aeronautical revenue. Prior to the pandemic, non-aeronautical revenues had been increasing and by 2019 made up around 40% of airport revenues. Much of this was associated with shopping at airports, and duty free in particular, and no tourist proved more valuable than the outbound Chinese traveller. The combination of souvenir buying, the need to return home with gifts and a desire for luxury goods meant that airports all around the world were increasingly focussed on this specific group of travellers.

Outbound Chinese travellers were set to become the largest group of travellers in the world but there was a large imbalance between the number of Chinese travelling abroad and the number of foreign visitors to China. The Chinese government is now encouraging citizens to spend more of their money at home and a prolonged period when foreign travel has not been possible may be changing habits for good.

Even before the pandemic Hainan Island was a shopping and duty free destination within China. Since foreign travel has been curtailed, visitors continued although the province received 65 million visitors in 2020, down 22% on 2019. However, a decision to change the Hainan’s offshore duty free policy in July 2020 resulted sales growing by 127%. The annual allowance was tripled to US$15,500, the number of categories included was expanded and a previous single-purchase limit was removed. The Island’s duty free shops took sales of over US$5 billion in 2020.

The success of Hainan means that the Chinese government is now looking to extend the policy to other parts of China.

Since July 2020 airline capacity to Sanya, Hainan’s main airport, has soared in response to rising visitor numbers, and seats are now running 33% above where they were 2 years ago. Few airports in the world are even able to match capacity levels of two years ago, and many are operating with a fraction of the travellers they used to handle, along with a fraction of the non-aeronautical revenue. Are there lessons from Hainan for other airports and destinations?

Like Hainan Island, Jeju Island in South Korea is a beach resort lying off the coast and offering duty free shopping. Jeju Island actually implemented increased allowances before Hainan did, from April 2020. Although the impact on scheduled airline capacity does not appear quite so direct, April 2020 does seem to mark the point at which capacity started to grow again, albeit in a faltering way.

For the past 3 months or so, Jeju has been tracking 2019 for scheduled capacity even though South Korea as a whole has 46% less capacity than it did 2 years ago. 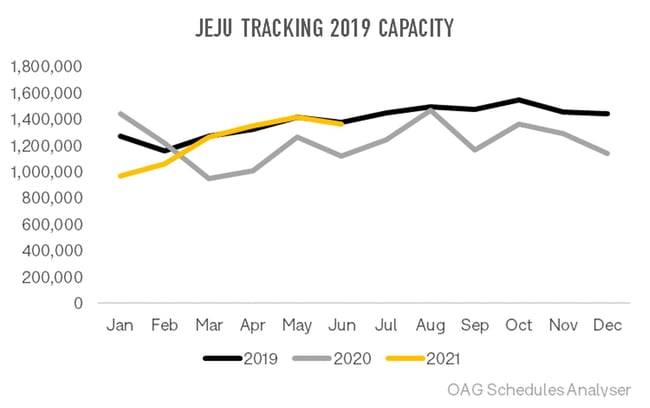 Like Hong Kong, Macau is a duty free city; it remains closed for many foreign visitors but Chinese visitors are permitted without quarantine, as long as they haven’t been in some parts of China considered more risky and they meet the PCR test requirements. Therefore, it is not surprising that the majority of the visitors are from Mainland China. However, despite the availability of duty free shopping, it doesn’t appear to have had the same impact on air travel that is seen in Hainan and Jeju. Airline capacity remains well below 2019 levels and there is little sign of growth. In March 2021 one of the districts of nearby Shenzhen announced plans for a high end duty free shopping hub and a Guangdong-Hong Kong – Macau Greater Bay Area duty free shopping area, but will that detract further from Macao as a destination or make it more attractive? 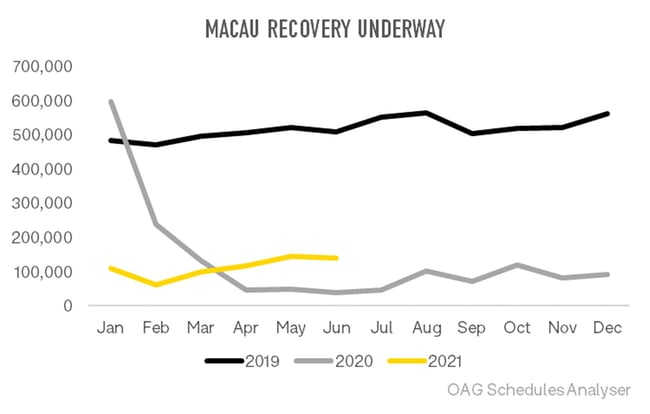 Is Okinawa missing a trick?

Okinawa is a duty free zone but, unlike in Hainan and Jeju, duty free allowances are not available to locals, just foreigners. Does this mean the islands are missing a trick in making the most of duty free sales at a time when international travel is severely restricted?

Japanese aviation has benefitted in many ways by having what is a relatively large domestic market which has enabled airlines to keep flying through the past 15 months. Okinawa Prefecture has lifted all coronavirus related restrictions on domestic travel, although some of the more remote islands have asked visitors to stay away as the medical facilities are limited if there is a problem. In theory, Okinawa should have been able to come out of the latest crisis in better shape than many destinations but scheduled capacity is further from 2019 levels than it was a year ago. 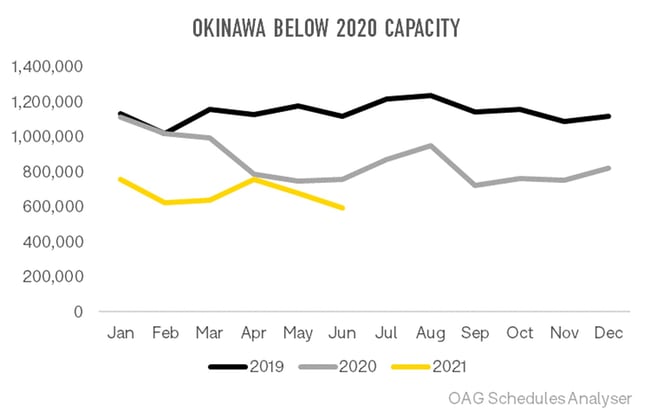 Duty Free shopping is a tool for airports

These examples show that duty free shopping can be a significant draw for some travellers. It’s true that the Chinese shopper is perhaps more influenced by the availability of duty free shopping than some other travellers, but when international air travel dries up airports need to find whatever means they can to win domestic travellers and earn revenue from them. Where duty free shopping is made available for domestic travellers there are some good examples of how this has helped airlines recover capacity, brought in non-aeronautical revenue for airports and supported travel retailers at this difficult time. Perhaps, in the light of this, the recent UK decision to end airside tax free shopping seems all the more strange.