If you have ever sat on a plane wondering where the person sitting next to you is travelling, the chances are that their final destination is not the same as yours! For many airlines connecting traffic is an important part of their business model and for some specific routes losing that connecting passenger can mean the difference between operating and the service being dropped.

As the recovery rebuilds from COVID-19 the importance of that connecting passenger will become increasingly important; but will also bring a series of operational and scheduling challenges for the airlines. It really could become a question of “can we live without those flows” in some cases.

The Importance of Connecting Airline Traffic

In 2019, the last “normal” year some 8.5 million flew from the United Kingdom to the United States, just under 4 million of those (46%) were making a connection as part of their journey. On landing in the US, some 1.2 million passengers were connecting to another point and as the table below highlights some carriers have a higher dependency on connecting traffic than others.

Perhaps not surprisingly the big three US legacy airlines have the highest proportions of passengers connecting onwards through their respective hubs and for Delta Air Lines in particular the value of that connecting traffic forms a major part of their revenues. Equally, for British Airways a relatively small proportion of traffic is connecting onwards, reflecting both the range of destinations they serve and also probably explaining why the North Atlantic market is so valuable for the airline.

For the US based carriers the creation of super hubs with a range of international services arriving in banks at selected times of the day and then feeding traffic into their domestic network has under pinned those hub networks. But just imagine if there was an enforced change in how those hubs worked and the transfer process.

The introduction of more quarantine rules and requirements for arriving passengers to be subject to more detailed inspection process has resulted in longer queues at airports; this week London Heathrow was dealing with queues in excess of seven hours at some times of the day. Missing a connecting flight was the least of the passengers worries; missing dinner was more likely! It does however highlight a serious issue that airlines and airports will have to face in the recovery process and that is all around connecting times and the need to perhaps re-engineer those connecting banks.

We are already likely to see increased aspects of social distancing at airports and most likely requirements for deeper cleansing of aircraft between flights and a whole series of additional requirements that health authorities will rightly be placing on airlines and arriving passengers. But how could this impact an airline and hub is a question we haven’t yet really addressed and it will become an issue in the coming months as that recovery builds.

Dallas Ft Worth has forever been recognised as one of the leading hub airports in the United States and globally ranks amongst the largest airports in the world. The city is both the corporate head office of American Airlines and one of their major hubs with thousands of connecting passengers perhaps just settling for a coffee and sandwich as they route through the airport.

The table below shows the top ten connecting markets from London Heathrow in 2019; in total some 39,000 passengers connected spread across some 171 different destinations; the top ten connecting points accounting for 40% of all those connecting. The power of the hub has always been based around the depth and range of connections and of course a major part of that is the efficiency of landing and being on a connecting flight within 90 minutes makes a great marketing message. But what would happen if that connecting window had to stretch out to 150 minutes with allowances being made for new arrival protocols and processes? 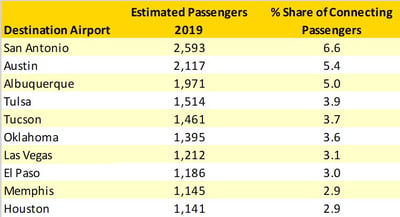 Taking a peak day for travel in June 2019 we have analysed the connectivity that would have been possible from American Airlines flight number AA51 scheduled to arrive in Dallas Ft Worth at 12:50. With a minimum ninety-minute connection and a maximum connection of 150 minutes then some thirty-nine pairs would have been connected; including of course many of the identified major flows to San Antonio, Austin and Albuquerque.

Now, assuming that the minimum connecting time is extended out to 150 minutes then the number of connecting points that can be made within the next hour of that time, so within three and a half hours of arrival in Dallas Ft Wort reduces down to 16, less than half of those previously possible. There will of course be later connections but in an industry where the shortest elapsed journey times and first screen GDS positioning are considered crucial the risk of losing connecting traffic will become very real for some airlines. And for some airlines, airports and ultimately destinations that perhaps no longer same day connect the implications of extended connecting times can be very serious.

In a changing market there are always winners and losers, some by accident and some by developing new products services and processes. Ultimately for anyone travelling from a secondary market in the United States there will always be a need to connect somewhere and for the major hub airports with large daily frequency then a three-hour connection compared to a ninety-minute connection may be a small inconvenience. So, for airports such as Atlanta, Chicago and Dallas Ft Worth the operating day may be slightly longer, but traffic will still flow through those airports.

However, for those smaller US hub airports with just one or a few flights a day may need to radically look at how airlines are operating at the airport and the current schedules. Airports falling into this category would include Minneapolis/St Paul, Raleigh/Durham, and perhaps Charleston who for example have only one flight a day from London Heathrow in normal times and very few from Europe.

For airlines then changes in connecting times may lead to slightly longer operating days for some carriers who may have selected services hanging on for the straggling connecting passengers. The majority of airlines will seek to absorb any lengthening of the operational day within their existing fleet; the last thing airlines need at the moment will be additional cost post the COVID-19 event. But, in some cases where airport curfews are enforced then it may be that those last twenty connecting passengers that used to arrive late at night will be early morning arrivals!