Can Flying Ever Be Green? Towards Sustainability in Aviation

Aviation contributes to climate change in a number of ways. The most frequently used measure is CO2 emissions which are predominantly released by the burning of fossil fuels in the engines used to make aircraft fly. Research shows that aviation probably accounts for about 2.5% to 2.8% of global CO2 emissions, depending on the source (Our World in Data / International Energy Agency) . When you take into account other gas emissions from aircraft as well as the effect of vapour trails, aviation’s contribution to climate change may rise to as much as 5%. This isn’t insignificant and the harsh reality is its relative contribution to global warming is set to increase in coming years simply because other sectors of the economy will have an easier time decarbonising.

So, can aviation be sustainable? Addressing the CO2 emissions associated with flying requires an ability to measure, track and reduce the contribution of each factor. It’s a complex process and there’s little wonder that it is often reduced to a single measure which provides a shorthand term making it easier to understand and communicate. Throughout this article, we will be discussing aviation sustainability and whether or not green travel can ever be achieved.

Can the aviation industry go carbon neutral by 2050?

Reliant on aviation fuel produced from fossil fuels to get aircraft off the ground and keep them flying, the industry is a long way from being able to offer truly sustainable travel.

At the IATA AGM in 2021 the industry association representing many of the world’s largest airlines committed to net-zero carbon emissions by 2050, bringing the airline industry into line with the goals of the Paris Agreement which set out to limit global warming to 1.5°C. Airport and aircraft manufacturers have made similar commitments and so the industry as a whole is now aligned on where it is aiming for when it comes to reducing the carbon footprint of flying.

It’s a worthy goal but much remains to be done to achieve this. Huge obstacles remain but this is an industry which has proved it can bring about continuous and significant improvements in operating efficiency over decades. The International Energy Agency reports that today’s aircraft are about 85% more efficient than the jet aircraft from the 1960s and about 20% more efficient than the aircraft they are replacing. Fuel efficiency itself has improved by 1.9% each year between 2010 and 2019, demonstrating that aircraft fuel has become more sustainable over the years.

The innovations which have brought about these improvements are the reason that the carbon emissions for each aircraft seat flown are lower than ever. Revenue management practices by airlines have contributed to aircraft flying with more of the seats filled than ever and this, too, has added to the improvement in carbon emissions per passenger. 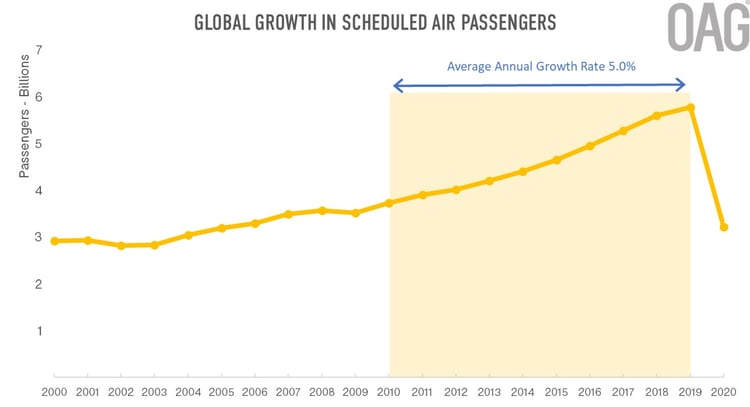 The problem that aviation has had regarding sustainability has been, at least until the global pandemic, that efficiency improvements could not keep pace with growth in air travel. In 2019, the last year full year of air travel before the pandemic, there were around 5.8 billion air passenger journeys worldwide. Between 2010 and 2019, the volume of passengers rose by an average of 5.0% each year.

Achieving carbon neutral flights by 2050 will rely on a combination of continued efficiency improvements, game-changing technological innovation and measures to manage demand.

Four pillars of sustainability in aviation

IATA, the industry association for many of the worlds’ airlines, says there are four pillars to creating a sustainable aviation industry. Some of these will play a part earlier in the period between now and 2050, while others will make an impact later. Some are known to provide solutions which will be rolled out increasingly over time, but some can only be described today as aspirational, reliant on technologies that are yet to be proven.

Technology covers a wide range of possible solutions. At every level of the industry new technology provides scope for lowering carbon emissions but there are a few big goals of which new aircraft fuels and new aircraft and engine types are probably the most significant.

Sustainable aviation fuels (SAF), sourced from biofuels and other sources, are a reality now - providing more options for green travel - but are only available in relatively small volumes and geographically localised. Scaling up availability of Sustainable Aviation Fuels (SAF) will take years and by the time SAF is in widespread use, other technological solutions may well be a reality too. In some ways, Sustainable Aviation Fuel is seen as an interim solution until those new technologies are available.

IATA estimates 65% of the contribution to achieving net zero in aviation will come from sustainable jet fuels and another 13% from new technologies. Jet engines are currently certified to operate using up to 50% SAF but this is likely to increase to 100% in time. IATA expects SAF to account for just 5% of CO2 abatement by 2030, but grow to 17.5% by 2035.

The big innovations are expected to come in the form of new aircraft technology such as electric and hydrogen-powered planes. Manufacturers have been working on the development of new engine and aircraft types for some time and we are starting to see them post timelines for putting this step change in technology into commercial operation with at least one publicly aiming for 2035.

One of the most effective ways for airlines to reduce carbon emissions now is to fly on newer aircraft, which are more fuel-efficient and therefore have lower CO2 emissions per passenger. However, no airline can change its fleet overnight; it takes time.

Aside from switching to newer aircraft, a close examination of operational processes will continue to find incremental efficiency improvements which reduce the carbon emissions associated with moving aircraft around. Ground operations, flight planning, reduced congestion all play their part, as do efforts to reduce the weight of the airborne aircraft. Full lifecycle analysis will also deliver additional reductions in carbon emissions associated with the manufacturing of aircraft and even the jet fuel production processes themselves.

The gains from infrastructure are largely in the area of air navigation changes which will enable aircraft to fly more direct routes with less congestion. Multinational efforts to harmonise airspace management is already underway in many parts of the world.

Airports, too are playing their part. Aside from making Sustainable Aviation Fuel available to airlines, many airports are looking at other initiatives to reduce their own carbon emissions, such as clean energy options for airport users, low energy designs for refurbishments and new constructions, and the use of vehicles using alternative fuels. By the end of 2021 there were over 125 airports that were part of the Airport Carbon Accreditation Scheme.

The most controversial aspects of the pathway to net-zero by 2050 is in the assumptions around the use of economic instruments to achieve this. IATA assumes a 19% contribution from carbon offsetting and carbon capture but there are other instruments that could be used such as taxation as a means to raise the cost of flying and potentially reduce demand.

Offsetting faces scepticism among those who would rather fossil fuels were kept in the ground, but offer a pragmatic solution for an industry which is going to be among the hardest to decarbonise in the short to medium term. It recognises the value of flying, both economically for trade and for personal connections and fulfilment, and accepts that gains made in other sectors can be used to offset the carbon footprint of flying.

Schemes such as the European Emissions Trading Scheme (ETS) and CORSIA, the newer ICAO scheme still in its pilot phase, provide market mechanisms that put a price on CO2 emissions and creates an incentive for reducing emissions, including allowing operators to offset their requirements through the use of SAF.

With fuel being one of the largest costs for an airline, efforts to reduce carbon emissions by making flying more efficient aircraft have gone hand-in-hand with reducing operational costs. It is not surprising, therefore, that some of the airlines which can boast the lowest per-passenger emissions and most eco-friendly travel options, are also those that offer the lowest airfares and have been growing fastest.

The COVID-19 pandemic has made an unexpected and sizeable dent in demand for air travel. In 2020, the number of air passengers fell back to a level last seen fifteen years earlier. Past experience with shocks to demand shows that demand always bounces back but this shock has been larger and more sustained than any that the air travel sector has seen before.

While air travel is returning where travel restrictions are lifted, questions remain as to whether the pandemic will make a long term difference to travel behaviour, and ultimately reduce demand for air travel, or just be a blip before demand returns to pre-pandemic levels. Have people got used to flying less? Probably yes. Are people more aware and more concerned about the environmental impact of flying? Many will be. Will corporations choose to fly less given they now know that digital and virtual communications are an adequate and less costly alternative to jumping on a plane and being out of an office for several days? Almost certainly, yes.

Changes in attitudes to flying may apply in some countries more than others, and especially so in the more mature aviation markets of North America and Europe. Elsewhere there are huge markets that before the pandemic were only just getting a taste for what affordable air travel could deliver in terms of corporate connections and personal freedom and have huge potential for rising demand for air travel.

The importance of calculating emissions

Having a plan in place to bring carbon emissions associated with sustainable aviation down to zero is vital but so too is being able to measure the emissions being generated. Across the industry, those working to reduce the climate change impact of flying need to be able to track performance towards goals and those outside need to hold the industry accountable to its commitments. It’s easier said than done. The task of calculating carbon emissions from aviation is complex.

As the world’s largest provider of travel data, OAG is playing its part. OAG has always played a role in the industry as both a gatherer and disseminator of data and now, at this critical time, has been working to generate accurate data on emissions associated with flying so that industry partners can better understand their performance and can provide their customers, often travellers, with that same information in order to make smarter and more planet-friendly decisions.

Can travellers reduce their carbon emissions from flying?

For a frequent flyer there is little doubt that their flying habit will dominate their individual contribution to climate change, but most of the worlds’ population don’t fly. Even in an affluent country where flying is commonplace a relatively few people account for a disproportionate amount of flying. So, flying less is one way to reduce the carbon emissions from flying.

But many people will continue to fly and it is increasingly common to see information about the carbon emissions associated with a particular flight displayed at the point of sale. Travellers can make greener flight choices by actively choosing between modes (air vs other mode), between destinations (longer flights or shorter flights), between airlines (older aircraft vs newer aircraft) and between specific flights (higher or lower emissions). People are becoming more conscious of green travel and want to know how to reduce their carbon footprint- OAG is doing its part to make this data available.

Big on Ambition: COP26 and Aviation
Is There Such a Thing as a Green Airline?
Report: A Greener World of Travel