Finally, good news for every scheduled airline CEO in Europe and the United States; the US will allow double vaccinated travellers to enter from a date in early November. Quite why regulators can’t state the precise date always seems to be odd, but it appears to have been a catching trend through the pandemic. This announcement is great news and perhaps, fingers crossed, an indication that a recovery is underway in the industry - just China, South East Asia, Australia, New Zealand and Africa to go! So, just how much of a Christmas gift will the reopening of services be to those airlines operating?

A US$ 1.5 Billion Revenue Opportunity... Normally!

It’s not very often that a new market effectively appears with a potential value of nearly US$1.4 billion, especially at the end of a year which everyone hoped would be the turning point in the pandemic recovery.

In the table below we have highlighted the 2019 revenue for the top twenty airlines with British Airways leading the way with "normally" US$ 305 million based upon “segment” revenue across the Atlantic. For the whole IAG Group of companies some US$ 393 million of revenue was generated; hardly surprising then that the company’s share price has increased by 26% in three days; can it go even further once bookings start flowing in? 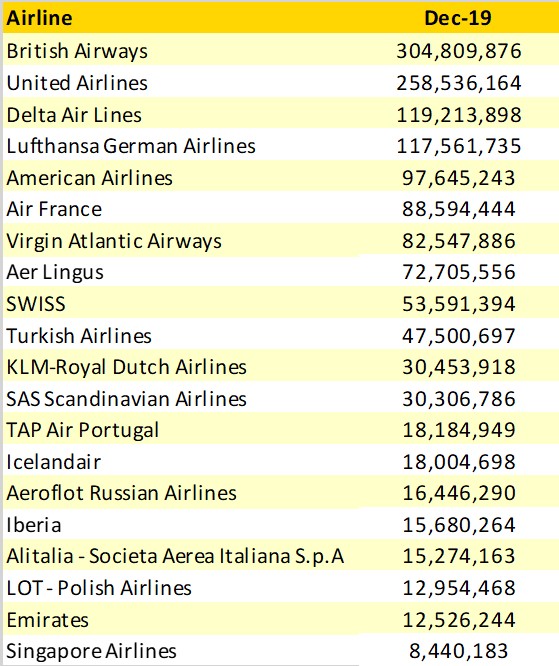 For the Star Alliance members, the December market was worth a staggering US$ 540 million, with United Airlines claiming nearly half of that revenue. Putting that into context, in a normal December that’s around US$ 17 million a day of revenue; no wonder for those carriers the Atlantic is a star part of their network.

Skyteam carriers generated US$ 270 million of cash and if Virgin Atlantic’s revenue was included, that would stretch up to US$ 352 million. Not surprisingly, Delta Air Lines are the largest revenue earner in the alliance, given that they serve multiple markets in Europe and sit just slightly ahead of Lufthansa in the overall rankings.

The sudden and surprising reopening of the market will have certainly changed the winter expectations of many airline CEOs, but as always, the devil is in the detail and for a number of reasons this December will certainly not be like that of two years earlier.

In every major market that has reopened, we have seen very strong immediate demand and the transatlantic will be no different to that for all airlines. There is pent-up demand to see Mickey Mouse, visit the Big Apple, and catch up with friends and family on both sides of a very large pond. However, a key question is how much of that revenue will actually be new cash, or merely the rapid cashing in of travel vouchers that have been stored electronically whilst waiting for the market to reopen. Only the airlines will have an idea of what the sum of this revenue is but with many airlines having only offered cash as a last resort, it will be interesting to see how much ‘real cash’ is paid for flights in December.

Forward bookings ahead of the reopening were, for nearly every airline, non-existent on those scheduled services that were still operating; many flights have been operating at less than 40% load factors and, if it were not for the strength of the cargo market, they would not have covered their operating costs. All of which means that even allowing for the pent-up demand there are plenty of seats to fill with metasearch suppliers reporting no significant increases in fares since earlier this week. For every airline the next few weeks will be a test of their nerves and revenue management skills, maximise cash or maximise yield; the perfect answer is of course both, but is that possible with less than a two-month lead time?

But perhaps the greatest unanswered question is around how much business travel there will be in December this year, compared to the volumes in 2019. Across all airlines in December 2019, some 374,000 bookings were made in the premium travel cabins; that equates to a lot of revenue, especially for British Airways who typically secured higher average yields than any carrier in the market. It’s very unlikely that at less than two months’ notice that volume of bookings will be made, and indeed scheduled capacity will certainly be less than in 2019. The key question of course will be if the premium cabin capacity balances out with demand and the airlines can then push yields higher; only time will tell on that front.

Whatever the short-term results from the transatlantic market reopening, the really good news is that it is finally open again. For airlines, that means they can start to think about a strong Summer 2022 operation, add some capacity back to the market, move forward with previously planned new routes and ultimately, start to build back their cash reserves. For travellers it’s good news too of course, those trips planned over the last eighteen months can finally be booked and it also probably means some very cheap fares will be on sale early in the new year. After all Christmas is all about the January sales!

*Check out OAG's new US Aviation Market - updated monthly with detailed insights, data and analysis focused on the US.

Future Travel Bookings: What is in Store for Caribbean Destinations this Winter?

Report: Busier Skies and a Demand for Vaccine Passports - the Next Phase of US Travel