It's only 40,000 seats in each direction, or just 0.065% of global airline capacity but for anyone in Australia or New Zealand the opening of the “Tasman Bubble” seems to be big news this week. Full flights, on time services, happy travellers – what on earth is happening!

For the rest of us stranded with international lockdowns it’s both a moment of optimism and jealousy; the chance to flash a passport and walk-through arrivals without being swabbed; small steps but every step or hop helps. It’s just a shame that the optimism in those two countries is not reflected in the global market where capacity indicators are beginning to head south again, perhaps hoping to join the travel bubble!

Airline capacity is clearly softening as capacity through to the end of August fell by another 4% with some 87.3 million more seats removed from the systems by airlines who are perhaps feeling slightly more nervous about the summer season than they were two weeks ago. Stubborn infection rates and slower than expected vaccination programmes in some countries are not helping both airlines and travellers; neither group being able to really plan with confidence. 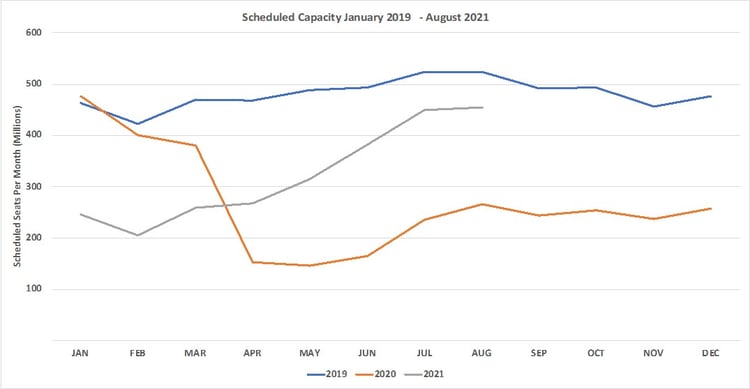 Global airline capacity for the week has settled at 61.1 million, a small 2% decline week on week and is the second successive week of capacity cuts. Since the pandemic took hold in March last year, we have yet to see global capacity above 63.2 million seats per week so this week’s numbers are within 3% of that “high water mark” but talk of a global recovery beginning does not seem to be reflected in the data and as we all know, we should be guided by the data!

Three of the five largest regional markets continue to see capacity cut week on week with more than 300,000 seats cut in each. Western Europe has seen capacity cut by some 12% in the last two weeks whilst both South and South East Asia are down by 10% in the same time period.; collectively across the three regions in fourteen days some 1.5 million seats have been dropped; that is around 2.5% of global airline capacity just as the aviation recovery was expected to be getting underway. Other regions with significant cuts in weekly capacity include North Africa (-15%), Lower South America (-8%) and Upper South America (-7%) which highlights the continued global impact of the pandemic.

Between each weekly update, as we follow the news and the latest outbreaks or increases in Covid infections, we expect to see a pretty quick impact on capacity; the two are so strongly connected. It is no surprise therefore to see that markets such as Thailand, India, France, Colombia and Italy all report significant percentage reductions in week-on-week capacity. What is perhaps more surprising, but equally reflective of where the data points is that such major markets can report such capacity cuts and still be in the global top twenty; indeed eight of the top twenty country markets are operating at below half of their normal capacity but remain in that top twenty! That says much for where the market continues to be.

There are some twenty-eight country markets that continue to have less than 15% of their normal capacity levels including Malaysia (-89%), the United Kingdom and Hong Kong (-88%) and Singapore (-86%). In addition, there are some seven country markets that have no scheduled capacity this week compared to January 2020; three of those are Pacific Islands which might not be a bad place to be stranded compared to North Korea!

There is no significant move in the airline rankings as the table below shows. American Airlines remain the largest carrier and whilst Delta Air Lines are in a secure second position their chances of catching American without something dramatic happening are slim.

There are of course many ways to measure airline rankings, destinations served, capacity, scheduled flights, international or domestic and ASK’s (Available Seat Kilometres) which is currently being used by some airlines as a measurement of their size since it probably helps their publicity. In the table below we have tracked international ASK’s which places Qatar Airways in poll position which explains their use of this data point in their current marketing activity; quite how long that will remain valid will be determined by things such as a “Transatlantic Corridor” or Emirates bringing back more A380’s!

There was some interest from the table we published last week around weekly last-minute capacity changes made by airlines and we have updated that table for this week, listing the top ten carriers for last minute capacity changes (Table 5). These airlines have essentially made last-minute adjustments to their schedules in response to increased infection rates in some cases such as Vistara and Thai Air Asia, in other instances because travel restrictions remain in place that they had hoped would have been removed. The one thing that all of these airlines have in common is that they would rather be operating all of those seats than adjusting capacity at such short notice.

Only two airlines added more than 5% extra capacity at less than a week’s notice: Lion Air and Air Arabia. We look forward to when we can report the positive side of this analysis with airlines adding capacity back at short notice.

The hope that a hop across the Tasman can bring to a global market is a really positive development and we have to keep our fingers crossed that it becomes established without any U-turns, although now open it is hard to imagine how that could happen. Apparently further travel bubbles and corridors are being considered but the reality is that capacity and demand continues to hover between 60 to 64 million seats a week, some 40% less normal levels.

In the UK despite an intent of international capacity being re-opened from mid-May, the authorities have yet to find the light bulbs for their planned traffic light system and speculation continues that no announcement on ‘Green” countries will be made until two weeks before travel opens. Quite how airlines can reasonably manage their operations with such a short-time frame to reopening is a mystery but then airlines have not had much help through the whole pandemic. The authorities lack of understanding is incredible.