Whilst the popularity of some of the world’s busiest domestic airline routes remains undiminished during the pandemic, there has been a considerable shift in the international busiest airline routes. In August 2019, 8 out of 10 of the Top 10 busiest global international routes operated within Asia on key business trunk routes, typically operating with high daily frequency and catering to time-sensitive business travellers.

Taipei - Hong Kong was the busiest international route back in August 2019, and travellers could choose from one of 39 flights each day operated by five different carriers. This level of frequency on an airline route is driven by the needs of time-sensitive business travellers wanting to travel to and from their destination within the same day, often starting or ending their business day in the office. On Kuala Lumpur - Singapore, another important business corridor, there were 10 carriers operating an average of 43 daily flights through August 2019, effectively one flight every half hour. Even the lowest frequency route of the Top 10, between Singapore and Hong Kong, operated on average 19 times each day.

Today, two years on and in the midst of a global pandemic, the profile of the Top 10 busiest international routes looks very different. There are no Asian routes at all in the Top 10 and there are only two routes which make both the 2019 and 2021 list – Cairo-Jeddah and London-New York, and London-New York has only recently returned to the Top 10 having dropped out for a period. Some of the busiest international routes right now serve quasi domestic markets – such as Moscow to Simferopol in the Ukraine, and Orlando – San Juan in Puerto Rico, an unincorporated US territory.

There are also key migrant worker and VFR (Visiting Friends and Relatives) markets being served too, including Egypt-Saudi Arabia and Paris-Guadeloupe. In general, the busiest airline routes are operated with fewer flights today than two years ago so, for instance, there are currently eight flights per day between New York and London, compared to 20 on a typical day in August 2019.

The shift away from business travel is even more evident when looking at the change in busiest international routes from the United States. In August 2019, seven of the Top 10 international routes operated across the Atlantic to the UK and France, but this has changed so that in August 2021 there is just one transatlantic route out of 10.

The ongoing restrictions on international travel are hampering transatlantic traffic and in particular a lack of reciprocal arrangements. US travellers can travel from the United States to Europe and the UK, but European and UK travellers can not yet travel the reverse route. The busiest routes from the US at the moment are clearly being driven by leisure or VFR markets, with almost all operating to Central America and the Caribbean. Routes to San Juan, Cancun, the Dominican Republic and San Jose all feature in the Top 10 as US travellers seek to escape home for some rest and relaxation. 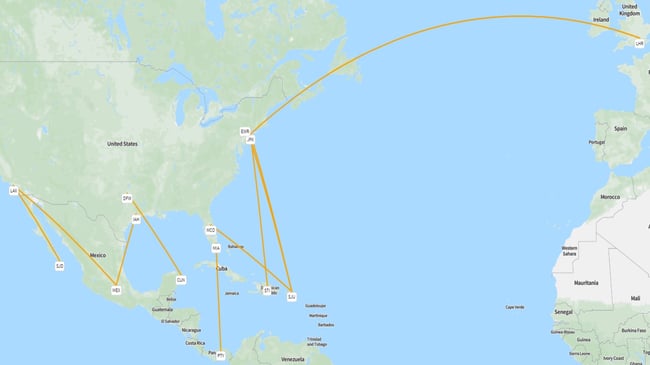 With ongoing uncertainty about how the winter season is going to pan out and to what extent business travel will return to pre-pandemic levels, the profile of the world’s busiest international routes seems set to remain changed for some time to come.

US Airlines Steal An Advantage Over Competitors