Wow, where did that come from! A near 27% reduction in capacity and the loss of over 3.2 million domestic seats in one week has handed the United States the title as the world’s largest aviation market something no one probably expected. It may be a short-lived gift from China as part of their New Year festivities but nevertheless a dramatic turnaround in just seven days.

Over the last few weeks, we have noted the regular capacity reductions in China, but this week’s numbers are just staggering and highlight how quiet this year’s festivities are likely to be.

The dramatic change in leadership hides a slightly more depressing headline. Global capacity has sunk to 48.1 million, breaking the 50 million threshold and placing us back at capacity levels similar to those reported at the end of June last year. In the last week some 28 million seats have been removed from sale by airlines around the globe to the end of March; February capacity currently stands at 211.4 million compared to 401 million last year; a decline of 48% with the potential for more cuts in the coming weeks. Going well so far 2021 isn’t it? 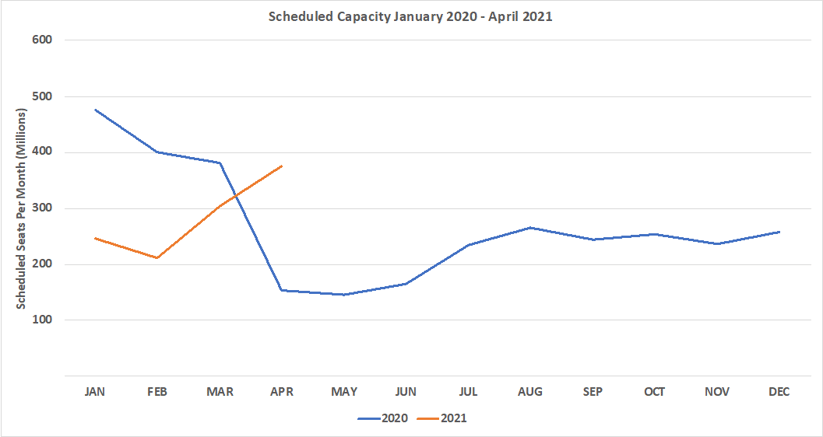 Despite China’s capacity collapse the North East Asia region just about hung on to the leading regional market position although the gap to North America is now down to less than 100,000 seats a week. Half of the worlds regional markets are now at less than half of the capacity operated last year and only two markets, South Asia and Central America are operating at more than 60% of their “normal” capacity levels.

The Southwest Pacific region is the one region offering any hope of a recovery with 9% growth week of week and steady growth over the last few weeks. Australia has reported an 82,000 (+11%) increase in capacity week on week and New Zealand has tagged along with an extra 21,000 seats as people rush to watch live sport in Melbourne.

Although back in first place the United States is unlikely to remain in that position after the Chinese New Year holiday is over; next week’s capacity for China is currently reported at some 14.6 million which seems wildly optimistic for a recovery but should at the very least revert back to around last week’s level of 12.2 million.

Vietnam, now the ninth largest market in the world is also the closest to pre Covid-19 capacity levels with some 84% of capacity operating although recent outbreaks of the virus are leading to weekly fluctuations in supply. Other markets that have around 30% of last year’s capacity include India and Mexico but sadly many country markets remain at below half of their normal levels.

And finally, for those looking to escape Storm Darcy in Europe and some very cold temperatures, forget it! Capacity in the UK is at just 11% of last year’s level and Germany at 13%, so finding a flight to anywhere would be very difficult.

Although the three largest Chinese airlines remain in the top ten global list the scale of capacity cuts can be clearly seen. China Southern have made the deepest cuts with some 445,000 seats dropped in a week with some 77,500 of those seats being removed from their Guangzhou operation. For China Eastern, Kunming has been the most impacted base with one third of capacity (-50,000) dropped.

This week’s data has the look of a Valentine’s Day massacre (next Sunday by the way) with total capacity falling back further, Chinese capacity taking a real hit and many other markets showing slight declines week on week. Scheduled capacity for next week stands at 55.5 million much of which is based around a very strong bounce back in China week on week; is that likely to happen? Probably not.