As the IAGA AGM commences today, there is an increasing feeling that the global market is finally about to recover, although the short-term outlook through to the year-end remains very soft. Things are certainly looking brighter into 2022, if you can hang on that long! Weekly capacity however remains becalmed, with global capacity at 78.6 million, a 0.5% reduction on last week as the usual combination of ‘ups and downs’ across regional markets leave the industry still 30% below 2019 levels.

Part of the current positivity comes from actual airline capacity for the next three months increasing, compared to the previous week, as the table below shows. As always it's necessary to look at the data in more detail - what appears to be a significant increase in airline capacity across North East Asia actually reflects Chinese airlines finally filing their full schedules for the rest of the year. The reality is that major regional markets continue to see capacity being stripped out to the year-end; Western Europe lost 3.2 million seats, the South West Pacific 2.2 million seats, and South East Asia 2.1 million seats. 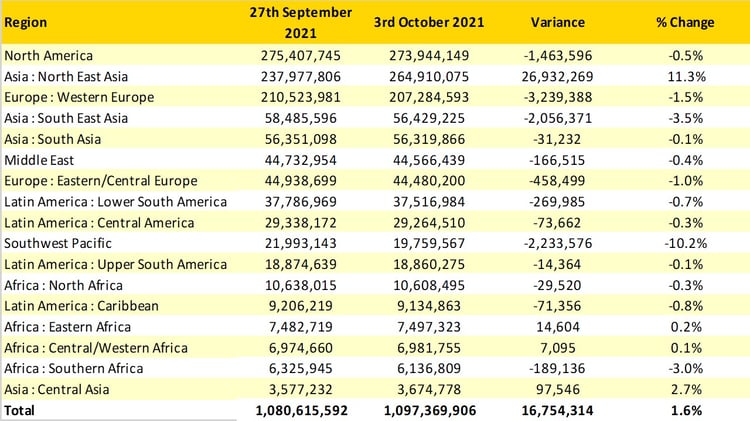 Projecting total capacity forward to the year-end, capacity continues to hover around the 2.7 billion mark as the chart below highlights. That would equate to a 15% increase on 2020 levels and leave the year at around 36% below the 2019 levels. It is difficult to see all that capacity being brought back in 2022 even under the most optimistic scenario and of course, we know demand has hindered capacity growth throughout this year. With a fair wind we may get back to 4.8 billion seats by the end of 2022. However, even then, we would still be around 15% below the good old days of 2019. It really is a long road to recovery. 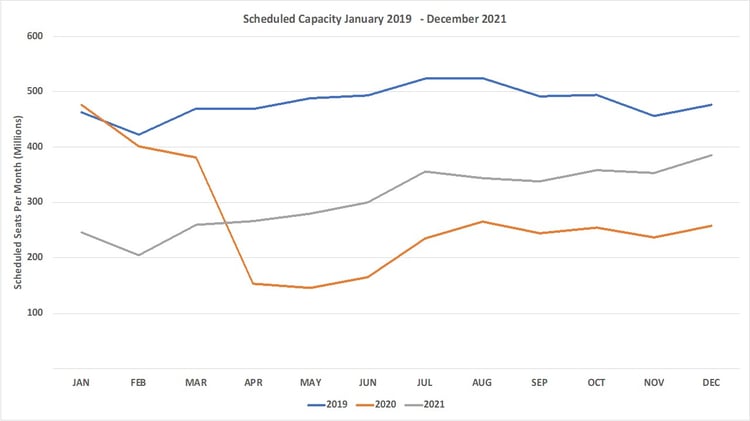 With the latest Golden Week holiday now closing up capacity in North East Asia they have once again fallen back, only by 3.9%, but that is a loss of nearly three-quarters of a million seats. This, for context, is itself larger than six of the world’s regional markets. This week’s largest growth region (at least in percentage terms) is Southwest Pacific where there are more positive noises about a wider reopening of international capacity from November onwards, and as it equates to just over 80,000 seats at least the market is once again heading in the right direction.

Both Eastern and Western Europe continue their seasonal wind downs, with little capacity impact continuing to be seen from the announcement that the United States market will reopen sometime in November. It seems that no one in the relevant US authorities can make their mind up on precisely what date “sometime” will be, which is certainly dampening any recovery in forward bookings for the month.

Spare a thought for Southern Africa where weekly capacity slipped back slightly this week. Despite South African Airlines relaunching services in the last week, the region remains 46% below its 2019 capacity levels. This week some 46 airlines will operate within the region, compared to 53 in 2019. 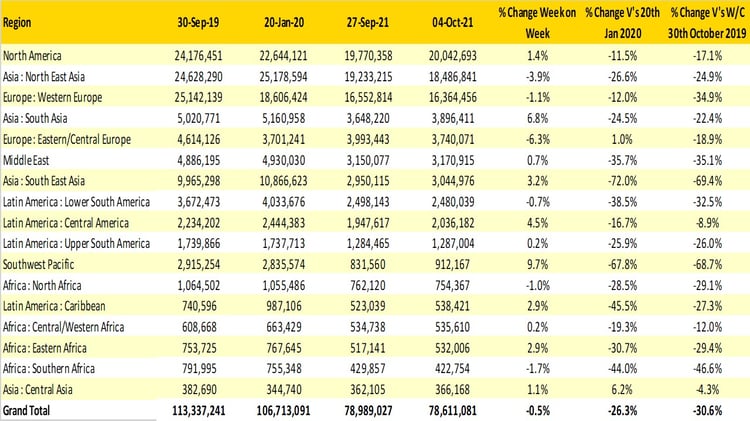 As we noted earlier, Chinese capacity has fallen back by over 5% this week, all of which is domestic and related to the end of the holiday season. Russia is another large market to have seen capacity fall this week, with the loss of some 160,000 weekly seats as their summer now winds back down.

The Indian domestic market is once again rebuilding, resulting in an 8% increase in capacity week on week. The announcement that TATA Group will be acquiring Air India will make for some interesting strategic dilemmas given the other carriers they own in the market. Perhaps some modest capacity consolidation may be on the cards in the next few months.

And finally, Greece continues its slide down the top twenty country markets and could drop out of the list in the next few weeks, as the Islands close ready for the Winter Season. If Greece does slip out of the chart, then the likely replacement will be the Netherlands and of course, the world's current largest international airport in Amsterdam.

Placings within the top twenty airlines remain unchanged compared to last week and indeed for the last few weeks. Modest capacity increases from some of the US majors, such as Southwest and United, have a nudged them closer to second placed Delta Air Lines, with Southwest now within striking distance of the second placed carrier. Ultimately though, size isn’t important. Revenue generation and profitability are the key metrics we should be looking at. 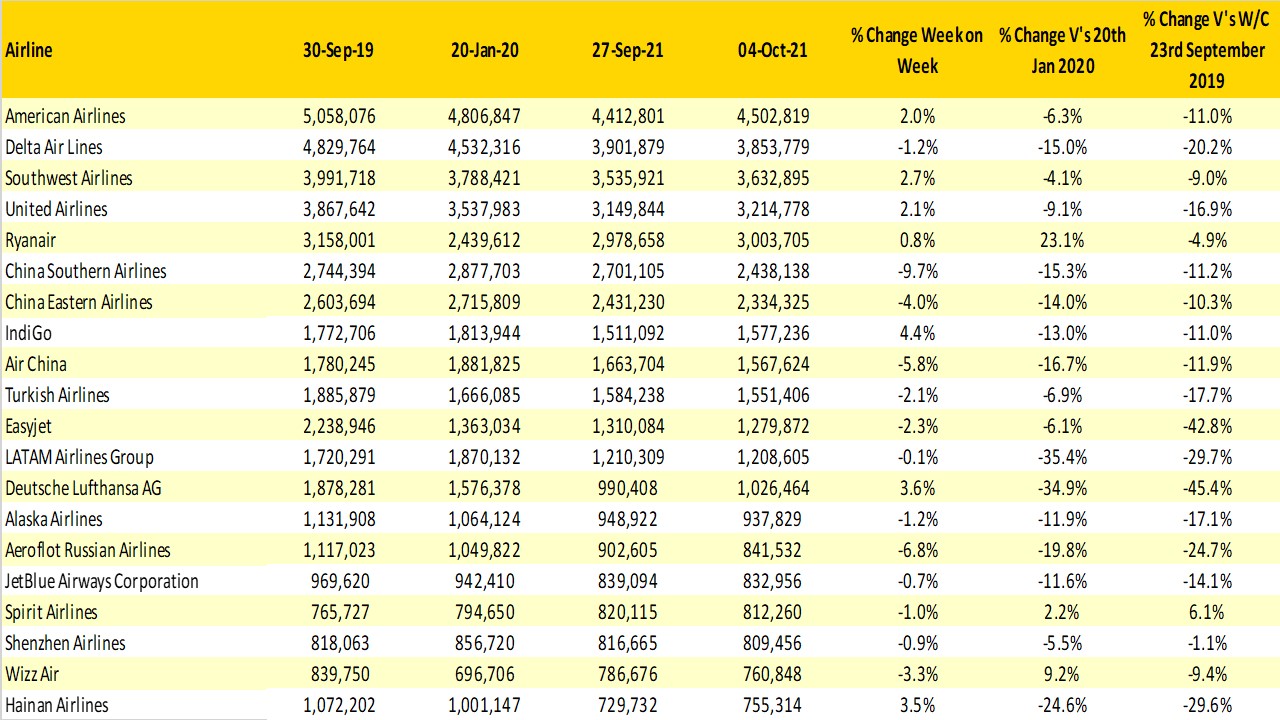 All in all, this week’s data feels a bit like holding over Heathrow waiting to land. We know that things are moving forward and there are increasingly positive noises in many markets about re-opening. In many cases, these noises remain slightly vague; phrases such as ‘most likely opening’ or ‘sometime in’, are not particularly helpful to airlines trying to plan their recoveries. Most importantly though, airlines are making those plans, so perhaps we have turned the corner.