Following last week’s lack of activity, airlines have been adding capacity back over the last seven days as the weird and wonderful world of commercial aviation continues its slow recovery. In a week when Qantas can offer pleasure flights to the moon but cannot cross more than the New Zealand border and where Wizz Air realised that competing in some domestic markets is not worth the hassle, global capacity grew by some 6.4% week-on-week. With some 67.9 million seats on offer, this week is the busiest since the 30th March 2020 so perhaps there is a capacity recovery underway; demand may be slightly slower in that recovery.

With May capacity ending on 279.9 million that represents a near doubling of seats against May 2020 but remains some 57% of the 2019 monthly level; around 4% of the original May capacity fell away during the 31 days. This time last week June 2021 was looking at some 332 million and today it stands at 316.5 million a 4.6% drop in one week highlighting how fragile the capacity recovery is across all markets. June’s capacity will come under further pressure this week as the UK Government prepares to announce its latest round of countries placed on the green list; will Turkey be stuffed; will Kos be lost and will Menorca be mentioned. Exciting isn’t it! 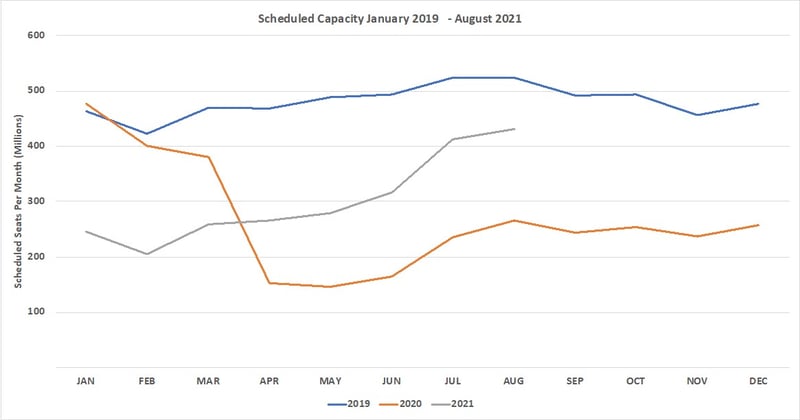 Both Eastern and Western Europe registered more than 20% increases in capacity week-on-week with 2.3 million extra seats added making the last seven days one of the fastest growing weeks since the pandemic commenced. North America continued to rebuild strongly, another million seats added week-on-week and since Canada remains closed for business the USA were responsible for all of those new seats resulting in an important breakthrough we will comment on later!

In fact, only three regions saw slight reductions in capacity; North East Asia, Lower South America and Southwest Pacific where a seven-day lockdown in the State of Victoria impacted capacity and blew another hole in the Tasman bubble. Quite how these markets will ever break out of their zero-based Covid approach to the pandemic is difficult to see, but I’m sure there is a way out isn’t there.

The biggest news of the week, and perhaps a reflection that however slow it may seem things are returning to normal, is that the United States is now the largest aviation market in the world having lost that position in the middle of April last year. An additional 900,000 domestic seats puts the US in first place whilst China has seen a slight reduction in capacity. In the US some 9% of all capacity continues to be on international services to points in Latin America, the Caribbean and Mexico; in China less than 0.9% of capacity is allocated to international flights. It can only be a matter of time before the US opens its borders to restriction free international travel and then the ‘ripple’ effect into other markets will be really positive.

Recent travel restrictions in Italy have eased leading to a 58% increase in capacity week-on-week moving the country six places higher in the top twenty ranking. Four major country markets also saw capacity increase by over 20% week-on-week, Vietnam, Turkey, Spain and Germany as a combination of easing lockdowns and summer season demand began to creep back into the market; especially between Germany and Spain where capacity increased by nearly one third in seven days. Early news today of everyone about to be tested in Ho Chi Minh City may of course flip Vietnam back into a capacity reduction next week such is the nature of the recovery and of course Malaysia is now in a two-week lockdown. Second-guessing what happens each week is one guess too many.

American Airlines continue to pull away as the largest airline with another 320,000 additional seats added back this week and new services being launched to destinations in Europe on a seasonal basis. The airline is now some 23% larger than its closest rival Delta Air Lines and are now operating at just 7% below their pre covid levels which given the lack of a full international network is an impressive performance.

Although not quite necessary since they are good at doing it themselves, a big shout out for Ryanair who will this week double their capacity to over 1.3 million seats a week, not surprisingly they seem to be offering some incredible fares at the moment in an attempt to stimulate demand.

In summary a mixed week of optimism and the occasional step backwards in some markets. There is increasing confidence amongst some experts that July and August will be strong, which sort of politely ignores that we have 30 days of June to get through first!