Yet more stormy times ahead for European carriers?

In recent years there seems to always be talk of a ‘summer of strikes’, or a ‘challenging winter ahead’ for Europe’s airlines, and it certainly seems like 2019 has been particularly bad. Is it any worse than the past? Are we going to see more of this kind of turbulence in the future or is this unlikely?

It certainly seems that the European aviation industry has had more than its fair share of disruption in 2019, with an unfortunate mix of industrial action, environmental protests at airports, drones, weather and airline failures all impacting on airports and airlines.

Is 2019 Europe’s ‘Annus Horribilis’ for Aviation?

With a quarter of the year still to go, Europe’s aviation community must be wondering what else can be thrown at it.  Industrial action has continued to interfere with operations across Europe as Europe’s big legacy carriers wrestle with addressing their historically high cost bases and attempt to evolve into airlines fit to face today’s highly competitive landscape. It was British Airways’ turn most recently, with the carrier having to cancel over 2,000 flights across two days in September due to a planned pilot strike.  The UK was also hit by a strike at Heathrow in August and ongoing concerns about drones following the Gatwick incident last year continues to cause disruption across Europe with drone related closures and delays reported at Milan, Frankfurt and Hannover in the last 6 months.

More recently the impact of airline failures has been felt across Europe with the collapse of Thomas Cook, a travel company with one of the longest histories in European aviation. In the last month France’s second largest airline, Aigle Azur, has gone into liquidation and a second French carrier, XL Airways followed swiftly.  Slovenia’s biggest carrier, Adria Airways has also collapsed.

Added to the other carriers who have disappeared so far in 2019 it’s not hard to see why capacity operated this winter by European carriers will fall by 1% to 3.35m flights.

Climate change is also reportedly having an impact, with Eurocontrol concerned that more storms in central Europe with flights having to be re-routed and a resultant knock on effect impacting on-time performance (OTP). [1].  It’s certainly the case that OTP for Europe’s airlines has fallen in the last 3 years. In 2015/16 European carriers recorded an average of 80.3% of flights arriving on time. By this year, this had fallen by 3 percentage points to 77.3%. 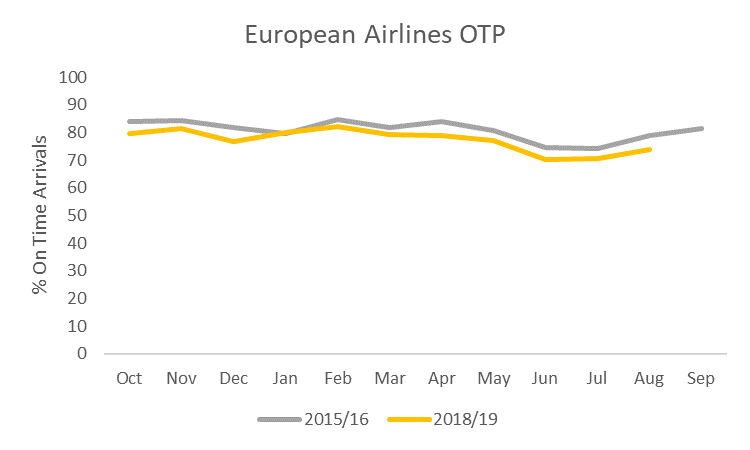 Are we really in decline?

The key question is whether this year is worse than previous years?  Industrial action has been a feature of European aviation for some years now, particularly in France where ATC is regularly impacted in the summer months by strike action. The biggest European carriers and airports remain on their journey to improve profitability so it’s unlikely that we’ve seen the last of strike action from this area.   It seems that this kind of disruption is here to stay, for the short term at least.

Whether drones will continue to hamper operations across Europe remains to be seen but the impact does seem to be having a greater effect as new technology emerges.  The challenge for airports is to be one step ahead and have anti-drone technology in place to address it. The reality now is that drones are a fact of life and if nothing else the events of 2018-19 will mean that the potential impacts are taken seriously at national and regional level.

Weather is harder to predict but scientists believe that it is becoming more unpredictable, so it seems that Europe’s airlines and airports will continue to be challenged in their drive to achieve good on-time performance. 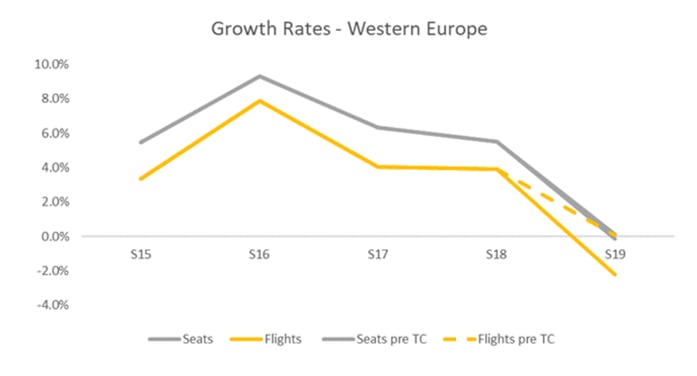 And what of airline failures and the resultant slowdown in capacity growth? Have we seen the worst of it?  Uncertainties about Brexit continue to hamper economic growth in the UK and the last two summer seasons have seen growth rates in Western Europe slow from their peak in 2016. Before the impact of the Thomas Cook collapse, flight growth in Summer 2019 was flat with growth of just 0.1% on last Summer.

The latest schedules data shows that by the end of the Summer 2019 season there will have been 2.2% fewer flights than last year and as we saw above, Winter 2019/20 will see capacity growth continue to stall across Europe.  The latest traffic data from OAG’s Traffic Analyser for the 12 months to June 2019 reports passenger growth of 4% in Western Europe on the previous year so the slowdown in capacity has not yet translated to lower passenger volumes and of course it may not, as airlines will undoubtedly use pricing to manage demand.

Overcapacity or overdependence on outdated models?

It could be argued that overcapacity is leading to airline failures but it’s more likely failures are a consequence of too many airlines having an unsustainable business model.  A relatively small number of European airlines make money.  That makes it hard to attract investors, and market changes and the way people buy products – as Thomas Cook found out to their cost – mean that investing in new technology and ways of reaching the customer are important.  Airlines which are not making money are not able to invest in the technology needed to be competitive today.

Finally, we have yet to see if the wave of resistance to air travel that is growing in Scandinavia becomes more widespread.   We have yet to see traffic growth stall in Europe, but you never know.

So, are things going to keep on getting more turbulent for Europe’s airlines?  On balance, they probably are.  Climate change seems set to only get worse. Economic slowdown means times are harder for airlines and it is only a matter of time before we see more failures, although hopefully not this winter. Michael O’Leary’s prediction that Europe could eventually end up with just 4 airline groups was undoubtedly provocative but may be an indicator of how things might pan out.