No time to wait: European delays getting worse

The conventional measure for understanding punctuality in the aviation industry is to consider the proportion of flights which arrive or depart within 15 minutes of their scheduled time. That’s proved a useful measure but it doesn’t tell us whether delays are getting better or worse.

Consideration of the actual average delay does give us that insight, however. OAG Flight Status data shows that average delays for both arriving flights and departing flights have been getting worse. We know airlines and airports are increasingly focussed on punctuality and reliability, often using these measures as a top-level KPI in their businesses, but the reality is that congested airports and increasingly perverse weather situations make keeping to a timetable ever trickier.

The good news for passengers is that at least airlines continue to be catching up some of the departure delay while in flight. As we all know, airline schedules are often prepared so there is a little wriggle-room for this. With brand loyalty tied to the passenger experience, managing passengers expectations is an important tool for the airline what better way than to demonstrate it has done all it can to help a flight arrive on-time – despite the delays imposed by external factors such as ‘air traffic control’.

But the trends are not good. Average arrival delays at European airports have been steadily increasing. Back in 2014 flights were less than 3 minutes late arriving at their destination; now it is over 6 minutes. While the increase is not so much for delays on departure, the average absolute delay is still far longer than for arrivals, at 13 minutes, a significant figure when the average flight from a European airport only lasts 2 hours and 23 minutes. With little infrastructure investment in sight, busy European airports will only get busier, and busy at a European airport is often a whole lot busier than a busy airport elsewhere.

The majority of European flights – 81% - are flights under 3 hours. Average departure delays of these short flights is 12 minutes while the average arrival delay is just 6 minutes. However, the longer the flight, the more they appear to be delayed on departure, while the opposite is true for arrival delays as flights get longer. Presumably there is a combination of factors here. With a third of the flights under 3 hours being operated by low cost carriers, and legacy airlines increasingly adopting low cost practices, there is increased pressure to stick to the schedule to maintain high aircraft utilisation – or at least try to make up for lost time while on the ground. Conversely, the longer flights are not surprisingly better able to make up for delays while in the air. Gaining ten or fifteen minutes over the course of an eight hour flight is obviously easier than on a flight of a few hours. 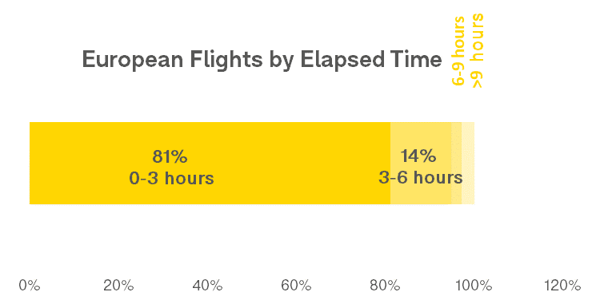 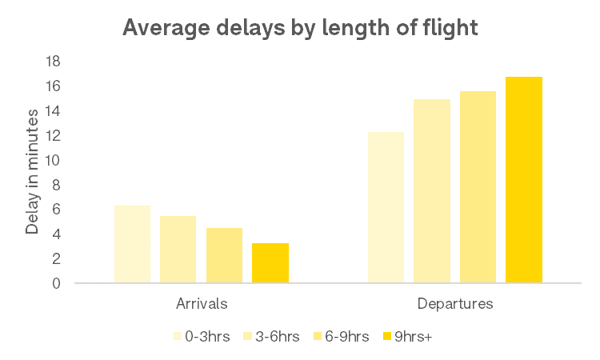 We all know that some of the largest airports in Europe are capacity constrained – London Heathrow, London Gatwick, Frankfurt, and so on, but does this translate into higher levels of delay? When we look at the Top 20 airports in Europe for flight departures there are a number of observations to be made.

Second, it isn’t always the airports which are effectively full or are constrained by their infrastructure, such as London Gatwick which operates with a single runway, which have higher levels of delay. Barcelona and Paris Charles de Gaulle are not operating at or near capacity. True, Lisbon Airport has no room and this may well contribute to the airport having some of the highest delays among this group, but the same cannot be said of Paris Orly.

Third, while the majority of these airports have higher levels of departure delays than arrival delays, the likes of Dublin, Istanbul and Moscow Sheremetyevo show that departure delays can be significantly lower than for arrivals; in these instances can we presume that it is what is happening on the ground, in conjunction with the airport, that is making the difference?

In contrast, why are departure delays at Orly and Vienna so much higher than arrival delays? Can that too be attributed to how the airline works with the airport to turn aircraft around?

With plenty of punctuality data now available, every airline and airport needs to be undertaking its own benchmarking of performance to understand how and why its performance measures up.