Carbon emissions from flight operations have become a key metric for those who care about sustainable air travel since it’s an easily understood shorthand to quantify impact, assess trends and develop targets. In truth, it’s only one of many different metrics that could and should be used to understand the impact of aviation on the climate.

It’s not surprising that airplane carbon emissions are the most widely touted measure of aviation sustainability; the sight of airline contrails streaking across skies is a very visible reminder that aircraft burn fossil fuels and that the burning of fossil fuels is a leading cause of global warming. It is going to take some years before aircraft are powered by renewable energy sources to any great extent. In the meantime, much is being done to make aircraft more efficient and reduce fuel burn.

Across the industry, there is work being done to reduce waste, reduce noise, bring in renewably powered airport vehicles, adopt low energy lighting, stop wildlife trafficking, and address a myriad of other issues which fall under the heading of sustainability. Many are harder to measure or come with more complexity.

There are a few different approaches being used to calculate carbon emissions from flights. In essence, there are open methodologies that have been developed in such a way that they can be widely adopted by a range of sectors.

There are currently two open methodologies that are widely available. The first was developed by the UK Department for the Environment, Food and Rural Affairs (Defra) to support companies in reporting greenhouse gas (GHG) emissions from their overall operations. The other method was created by ICAO as part of a project to quantify the total carbon footprint from commercial flight operations.

Both these models were developed to work where limited data about the flight is available, so they draw on industry averages and assumed flight characteristics and representative aircraft attributes. As a result, these methodologies have been relatively easy to adopt and have been quickly taken up by climate change consultancies, carbon offsetting companies and the more progressive travel agents.

There are also proprietary methodologies where an individual company or business chooses to calculate flight emissions in a way that suits their own needs. These are often an extension or adaptation of an open standard.

While these methods for calculating carbon emissions provide a good starting point for an industry that needs to understand its climate impact, the lack of granularity is a drawback. Today, industry insiders as well as consumers expect much more ability to understand the impact of flying and sufficient information to help them make informed choices. There is a need for more specific data to be provided so that the accuracy of the results can be improved.

Moving from Generic to Specific

In February 2020, Storm Ciara helped British Airways to record the fastest subsonic flight from New York to London as the aircraft rode the Jetstream and arrived four hours and 56 minutes after taking off (a noteworthy 80 minutes ahead of schedule). What perhaps should have made an equally appealing headline was the Virgin Atlantic flight which came in one minute behind but used a fraction of the fuel since it was operated with a newer fuel-efficient A350-1000 aircraft (instead of British Airways’ older 747).

We know that the choice of aircraft model, engine type and age of aircraft all make a substantial difference to the carbon emissions of a flight, and so using generic attributes is no longer good enough. If age, aircraft model and engine type all influence fuel burn, and are known quantities, then is it time for the calculation of carbon emissions to become more sophisticated?

Increasingly, anyone involved in assessing the carbon emissions associated with flying will need to be looking at calculations based on the specific of the flight, rather than based on generic attributes.

There are more and more entities needing to make these calculations as Scope 1, Scope 2 and Scope 3 definitions of greenhouse gas emissions become more mainstream. The Scope 3 emissions, for instance, are the indirect emissions that come from the activities of a business including the emissions associated with the business travel of its employees. So, any company looking to measure emissions and work towards a Net Zero goal will be interested in this.

One example are the corporate business travel accounts, responsible for millions of trips and with sizeable budgets. In recent years we’ve seen many large companies pledge to offset their business travel as part of their Net Zero targets. These corporates are looking for accurate emissions calculations to ensure they meet, but do not exceed, their obligations in terms of cost. Salesforce, the global CRM platform, committed to offsetting its business travel back in 2019. Although the company sees offsetting as a last resort, behind reducing emissions and mitigation strategies, as long as some offsetting takes place total carbon emissions associated with business travel need calculating.

While individual passengers may be less sensitive to the way air travel emissions are calculated, they too are starting to care about the environmental impact of their travels. One of the most high-profile launches in recent months was the release of Google’s flight emissions estimates using OAG data as one of their key inputs. No longer are travellers restricted to retrospective management of their carbon footprint, they can now be proactive in their flight selection. 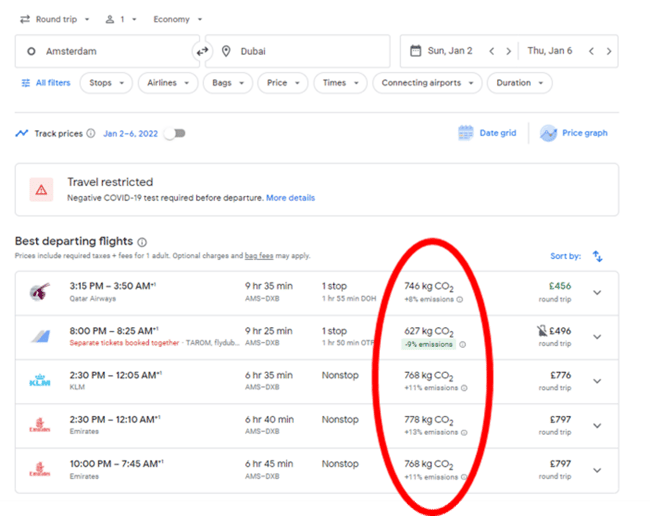 It is yet to be seen whether data about flight emissions will influence a passenger’s booking decision as much as ticket price, but airlines are on the alert. Being precise about which aircraft will be flown, the number of seats onboard or the actual flight times can significantly influence both the predicted and actual emissions associated with a flight. It is also essential to ensure this data can easily merge with other data sets to deliver better analysis and ultimately better models.

The global pandemic has seen the aviation industry severely damaged, but it will come back. 2020 could have simply been a year when the focus was on survival, but many players used the time to consider what changes are needed to ensure a sustainable industry going forward. As a result, there are new environmental projects and initiatives alongside plenty of announcements of new sustainability targets and ambitions.

As more detailed data about emissions becomes possible, one emerging area of pressure comes from the dissemination of emissions data to both passengers and businesses alike. The example by Google, shown above, is part of that trend. But more needs to be done to help traditional and online travel agencies as well as businesses to manage emissions data associated with flights that have been taken or might be taken. They need a turnkey solution that enables them to inform their passengers about the climate impact of their flight at the time of booking, so there is a clear need to integrate emissions data into existing workflows.

The challenge also affects other sectors that need mechanisms to capture data about flight emissions post-travel to inform wider business concerns and opportunities, such as:

There also remains plenty of scope to improve the methodologies for calculating emissions. The headline from the IATA AGM in 2020 was a commitment by the world’s airlines to achieve net-zero carbon emissions by 2050. In the strategy to achieve this target, it was estimated that 65% of the reduction will come from Sustainable Aviation Fuel (SAF). Yet, there is no recognised emissions methodology that can account for SAF usage, let alone a coordinated record of which airlines are adopting SAF on a consistent basis. Similarly, despite offsetting being seen as a key short-term component on the route to net-zero, today’s emissions models do not enable carbon offsetting to be applied.

So, whilst large strides have been made in recent months to progress the availability of emissions data, for both B2B and B2C purposes, there remains plenty of work to do. What success looks like, from the perspective of emissions data availability, will no doubt include a powerful combination of underlying data, a future proofed methodology and a global integrated distribution strategy.