At the end of January 2022, the price of jet fuel reached its highest point in well over 5 years, at almost $103/bbl at the time of writing. That’s 70% up on a year ago and presents yet another challenge for the industry.

Jet Fuel Is a Major Cost for Airlines

Fuel is a major cost component of operating an airline, often accounting for 20-30% of operating costs. A look at Delta Air Lines’ earning release for Q4 2021 puts the cost of fuel and related taxes at 17% of total operating expenses quarterly while the results for Air France in the first half of 2021 put their fuel cost at 27% of operating expenses. So, a rise in fuel costs of this scale means airlines have to reduce costs elsewhere or increase fares. In the current operating environment neither is easy.

Oil prices are high as consumption has exceeded production since the second half of 2020 but that situation is likely to reverse in 2022 as production increases and growth in demand slows down. While oil prices are expected to fall in 2022, they are may well stick at around the same level they were in 2018 which is still higher than they were through 2019 and 2020. In 2018 the airline industry was profitable so it’s not that it can’t work with an oil price at that level, but times were very different then.

To make things even harder for airlines, targets for the use of sustainable aviation fuel (SAF) will start adding to the cost of fuel from this year. According to IATA global production of SAF is only about 100 million litres a year, or 0.1% of all aviation fuel used. Various airlines have, however, committed to bringing this figure to 10% by 2030, a truly ambitious goal.

Unfortunately, while production is low volume the cost is also high. IATA estimates the cost of SAF is between two and four times higher than fossil fuels, although a recent announcement by Air France-KLM implied that the cost differential may be more like four to eight times the costs of kerosene.

IATA and others have called on governments to support the production of SAF but in the form of economic stimulus. France, taking a different route, has imposed a requirement which came into law on January 1st 2022 that airline refueling in France must use at least one percent sustainable aviation fuel in their fuel mix. This is set to increase to 2% in 2025 and 5% in 2030, bringing it into line with the EU’s ‘Fit for 55’ proposal which could mandate SAF utilization to 2% of jet fuel use by 2025 and at least 5% by 2030.

For Air France, the way to square the circle of increased costs for using SAF is to introduce a SAF surcharge. The new fuel levy, voluntary for the moment, will see a charge of between €1 and €12 added to ticket prices depending on the flight length and the cabin class.

Airlines have often used fuel surcharges to mitigate the shocks to the business model when oil prices rise sharply, so maybe this is no different. The effect is a small increase in price although when you break down airfares into all their components there are plenty of other elements which could be questioned.

Analysis of a fare on an Air France flight to and from New York in mid-February, courtesy of ITA Airfare Search, shows just how many fees and charges are applied to the base fare.

In this instance, the return airfare is €571.57 but only €201.50 of that is the base fare. There are an additional six fees, taxes and facility charges imposed by US authorities, four imposed by French authorities and two that are ‘carrier-imposed surcharges’. The code ‘YR’ is used for insurance and security charges, which in this instance amount to €228.00, while the code ‘YQ’ is used for fuel surcharges, and that is €26.00 for this fare. So, even without the new SAF surcharge, the carrier imposed surcharges amount to 44% of the ticket price. 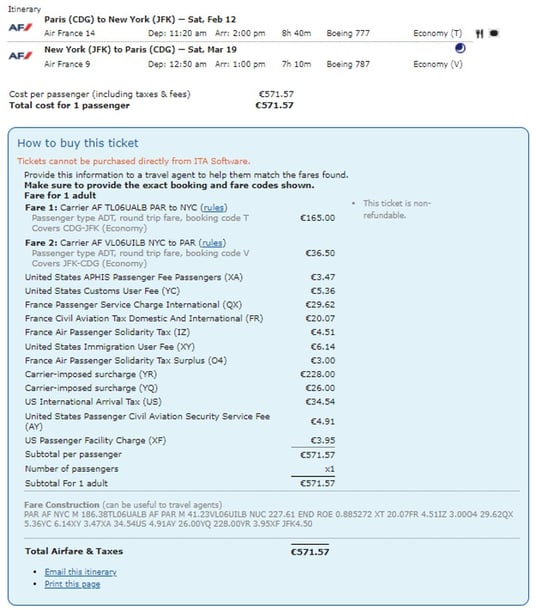 It could be argued that this isn’t a bad time for Air France to make this announcement. The relationship between airline capacity, fares and demand is as unclear as it’s probably ever been and so a small price increase may not make much difference. There are so many other charges being levied on passengers these days that a new charge, albeit voluntary for the moment, is just one of many and probably would-be travellers only look at the overall ticket price. Perhaps the timing of the SAF surcharge is a helpful mechanism to claw back some of the extra expense of buying fuel – kerosene or SAF - at this time. And then there’s the need to reckon with how an industry that has been so strained is going to achieve its sustainability goals if governments are slow to beef up production of SAF.

Whether French citizens will choose to pay this surcharge while it's voluntary is an altogether different question.