This week’s data highlights once again just how frustrating and different every market is in their recovery journey with some notable ups and downs taking place.

The headline data looks encouraging, another 3.1 million more seats operating than last week, 4.1% growth week-on-week and global capacity now at 78.6 million. For context that is “only” 40 million fewer than the same week in 2019 although some 29 million ahead of the same week last year so that is positive.

In line with continued lockdowns and confusion over travel requirements, a further 8 million seats have been removed by airlines for sale during the rest of July and a further 6.7 million for August. The chances of saving the summer for the airline industry have all but disappeared. Major markets remain closed; Independence Day in the US may have been celebrated but independence to travel remains off the agenda. In January 2020 around 60% of all seats were operated on domestic services, this week nearly three-quarters of all seats will be operated domestic flights; with 57.7 million domestic seats and staycations for the lucky few. 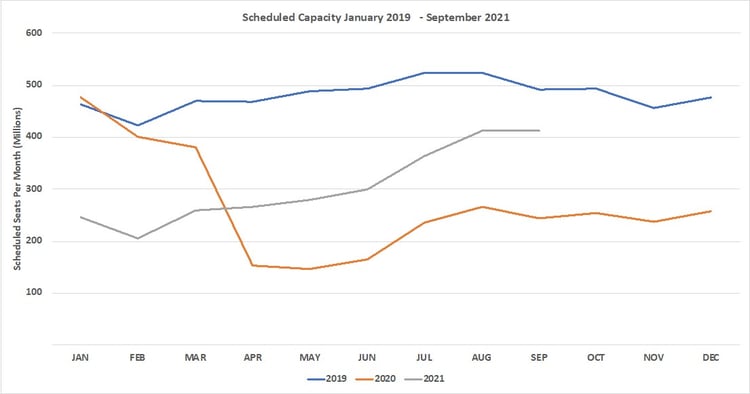 North East Asia is once again the largest regional market with an additional 1.4 million seats added back week-on-week, all of which are in China as airlines add more capacity ahead of the peak summer season. North America continues the consistent pattern of growth that we have seen over the last few months with some 580,000 more seats added back and 90% of those are once again in the United States; you just have to wonder how close to a full recovery this market would be if they allowed qualifying foreign passport holders back into the country.

Unfortunately South East Asia, Southwest Pacific and Southern Africa have all seen significant capacity reduction in the last seven days. In the Pacific, bubbles have burst, additional restrictions placed on returning visitors and staggering increases in air fares are the consequences of an Australian outbreak where only 7% of the population has been vaccinated; what was a “best case” example of Covid-19 management seems to have turned into a bit of a mess.

In South East Asia, Vietnam has a week-on-week capacity reduction of over a quarter of a million and in Malaysia the loss of another 72,000 seats means that the country is back at less than 10% of its pre Covid-19 capacity levels. Before Covid-19 local airlines were struggling to survive, the latest setbacks and long-term travel restrictions will place further pressure on those carriers.

Meanwhile Southern Africa (well South Africa really) reports a 22% reduction in seats as the latest Covid-19 spike runs through the country. In such depressed markets it seems slightly odd that regulators are comfortable refusing Delta Air Lines approval to operate a JNB – CPT sector as part of their operations to the country; after all, they didn’t want traffic rights…very odd!

Capacity continues to grow across all of the major European markets this week with France the fastest growing country (+12%); I guess that since they are no longer in the Euro Championship that people are now heading off on holiday. Interestingly, Spain is slightly ahead of Italy in terms of growth, can we read anything into that for their semi-final clash on Tuesday. And as for the Denmark they fail to appear in the top twenty list (42nd position) whilst the United Kingdom continues to move up the table, surely that must mean just one thing……a Danish pasting on Wednesday.

Various state lockdowns in Australia have resulted in some 270,000 seats being removed from the domestic market in the last week, Virgin Australia making the deepest cuts dropping some nearly 140,000 seats as they responded quickly to the latest events. For airlines in Australia the continual stopping and starting of services must be very frustrating and with inbound travel now expected to be restricted until early 2022 things may get worse before they get better.

The list of top global airlines remains unchanged but there have been some small movements within the chart. Ryanair have dropped one place as a result of China Southern adding back over 20% capacity this week; Europe’s favourite airline must be confused, when you add back some 9% capacity week on week you would not normally expect to drop a place.

Despite the roller coaster of a recovery there is a clear trend of capacity growth around the globe despite the continued lockdowns in some major country markets and the most recent Covid-19 spikes. In the coming weeks we may see a bit more capacity added in some markets such as the UK where it seems every airline is currently planning more capacity from the 19th July for some reason; that will be good news for many. And yet at the same time airlines are planning for some 2.1 million seats between Western Europe and the United States in August compared to just 1.6 million in July; a 30% increase; is that realistic or just living in hope?