Industry Heads For Half A Billion Fewer Seats in Quarter One

Finally it’s over, we mean January not Covid-19 and the airline industry can breathe a sigh of relief; hopefully February will begin to see some hope for us all but even in the last few days of the month January continued to offer more punches to an industry already on its knees.

We all expected 2021 to be a year of two halves but I’m not sure anyone expected the first month of the year to bring such a bad start. At the beginning of the month there were some 264.7 million seats scheduled, by the end of the month that had fallen to 246.5 million, a 7% reduction in capacity through the month. The last few days of January saw new travel restrictions imposed in Canada, Perth implement a five-day circuit breaking lockdown, travel bans in France, hotel breaks (well quarantine) for travellers to the UK and the UAE essentially lose one of its major traffic flows. Friday afternoon saw the HNA Group declare bankruptcy although continue to operate and earlier in the week a number of Canadian carriers virtually cease all services until the end of March; things will get better, it’s just when!

As the chart below highlights, February scheduled capacity looks down against January but when measured on a daily basis is actually very similar to January at some 7.9 million seats a day although in absolute terms the month currently has some 179 million fewer seats than last year. Global capacity for the first quarter of the year is now standing at 782.2 million compared to 1.258 billion in 2020, gulp! 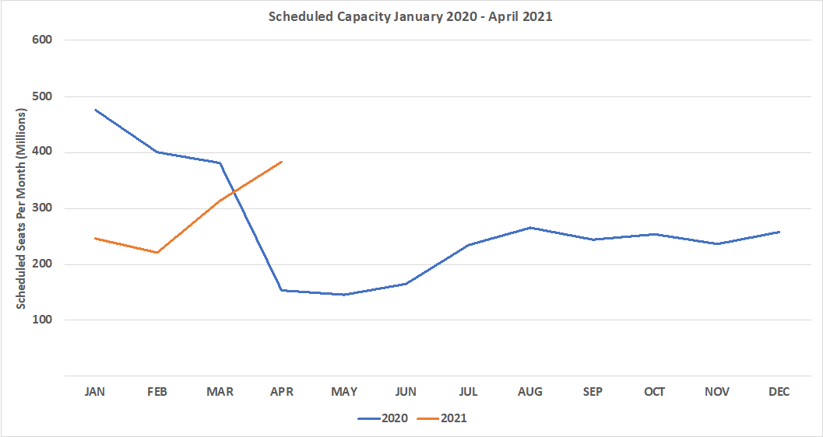 We had reported in recent weeks that capacity in North East Asia would come under pressure in the weeks building up to Chinese New Year as new lockdowns and Covid-19 outbreaks impacted Chinese capacity and that can be seen this week. Some 1.5 million seats have dropped out from the regional capacity in a week and 1.4 million of those are to, from or within China.

Nine of the seventeen global regions are now operating with less than 50% of the capacity operated in the same week last year. Western Europe is at less than 25% of its normal capacity levels and South East Asia at 35% of previous levels; two of the worlds traditional strongest markets leading the way for all the wrong reasons.

Week on week capacity has nudged a little bit further south, but more like a steady decent than a normal approach to London City Airport! North East Asia has been consistently falling back in the last few weeks as capacity in China is adjusted to reflect Covid-19 outbreaks and the advice around not travelling for the New Year festivities. The other regional market reporting a notable decline in weekly capacity is Lower South America where capacity from Brazil has been impacted by travel restrictions to many international markets in response to the latest variant appearing.

Western Europe remains the most badly affected region with less than one quarter of last year’s capacity levels being operated and in total nine of the seventeen regional markets have less than half their normal scheduled capacity.

Whilst there is little movement in the country rankings there are likely to be some movements in the coming weeks. Capacity in Indonesia has bounced back after a reduction last week and is now edging closer to replacing Japan in fourth position where further capacity cuts in the domestic market are likely during the month. Both the UAE and France could see further capacity cuts this week as a result of recent changes in travel restrictions at the end of last week and Germany could also be affected given the volumes of capacity that the country has with both the UAE and France; global capacity really can  suffer a “domino” effect once one market changes.

Although we have already noted the decline in capacity from/to China it’s interesting to track how the capacity has changed by market. For much of 2020 domestic capacity had been ahead of 2019 with the major airlines appearing to have successfully transitioned capacity to the home market; the latest data suggest that capacity is now falling. Chinese domestic capacity this week will be some 18% below last year’s level and 710,000 seats (3,700 flights) have been removed from the schedules in the last seven days. Chinese international capacity remains at around 6% of its 2020 levels and with inbound airlines frequently having restrictions placed on services this is unlikely to change in the next few months. China really is the key to a global market recovery, let’s hope they realise that.

Delta Air Lines and American continue to contest the position of the world’s largest airline with less than 7,500 seats between the two carriers; so, a small swing in capacity from either could see a switchover next week; something slightly different for the network planners to factor into this week’s changes. The top four airlines are now all US based.

China Eastern removed nearly a quarter of a million seats in the week, one of the deepest cuts in capacity the airline has made and in the last two weeks some 537,000 seats have been dropped by the airline. China Southern have also been busy cutting capacity with over half a million seats a week cut in the same two-week period. Total Chinese capacity has been cut by 15% in two weeks, not quite the pattern we were hoping for or reflective of a recovery.

With many travel restrictions announced at the end of last week holding capacity above the 50-million-mark next week may be challenging but there are snippets of positivity out there if you look hard enough. Some major US airlines have suggested that their summer performance could actually be quite strong if the markets can be released from lockdown particularly given the number of bookings rolled over from last year when Covid-19 first impacted travel. And Michael O’Leary from Ryanair (just in case you didn’t know!) has today said that the airline are expecting a ‘strong return” for European travel this Summer, and it’s best not to argue with Mr O’Leary.

Meanwhile in other news, the continued roll out of B737-max services continues with some 750 flights scheduled for this week across a number of airlines with Gol now the largest operator slightly ahead of American Airlines. It is only a small proportion of what should have been operating but just perhaps it is symbolic of a start on the road to recovery.