In June, Westjet and Delta came one step closer to creating a joint venture with the clearance of their proposal by the Canadian Competition Bureau. One potential benefit of a Canadian/US alliance for Delta is the ability to win long haul traffic from Canada by facilitating connecting journeys via one of the Delta hubs in the US, or what is known as Sixth Freedom traffic.

The two carriers already code-share but the deal, yet to be cleared by US regulators, will allow them to expand the code-sharing arrangement, coordinate schedules and fares and bring their airport operations closer together.

The main competitor in the trans-border market is Air Canada and there is some evidence that in 2018 Air Canada was trying to expand its own sixth freedom traffic between the US and long-haul destinations; OAG Connections Analyser shows that on a typical day in August 2018 there were 5% more possible online connections at Canadian airports within a four-hour window between flights arriving from the US to flights to other international destinations than in the previous year.

In May 2019, Air Canada carried 80,000 passengers from airports in the US to destinations in Europe, Asia and elsewhere outside either Canada or the US. Two-way sixth freedom traffic to and from the US on the airline, at 160,000 passengers, contributed 5% of all Air Canada bookings in the month – not insubstantial.

Clearly, there is traffic to be gained by facilitating sixth freedom traffic flows, with the benefit of using that connecting traffic to support the hub operations. So how well do the Westjet and Delta networks fit together now, and how much additional connecting traffic could they support? Well the answer today is that they don’t fit well at all if sixth freedom traffic is the goal. 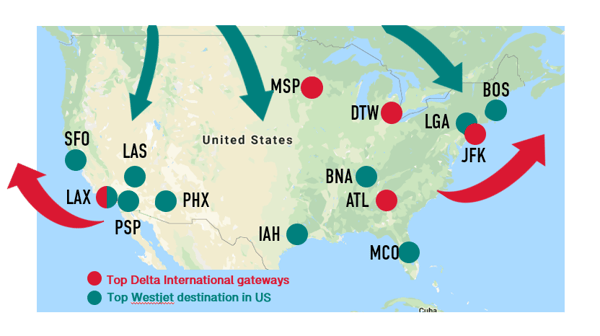 However, only LAX features among the 10 US airports which account for 80% of Westjet’s inbound capacity from Canada to the US. While airports like Boston (BOS) are relatively important for both airlines, making up 3% of Delta’s non-Canadian international capacity and 4% of Westjet’s Canadian capacity, at the moment fewer than 10,000 passengers could be routed this way in each direction – and that’s if there was no O&D traffic.

The two networks are clearly not aligned at the moment in a way that can deliver sixth freedom traffic. So where is the opportunity?

It’s hard to identify a clear trans-border strategy from reviewing the Westjet schedule. Throughout 2018 capacity between Canadian airports and US airports varied from month to month reaching a peak of over 100,000 seats in April but falling to fewer than 20,000 in September. 2019 has seen a repeat of this with peaks in January and May and low points in April and again in September, according to the current filed schedule. 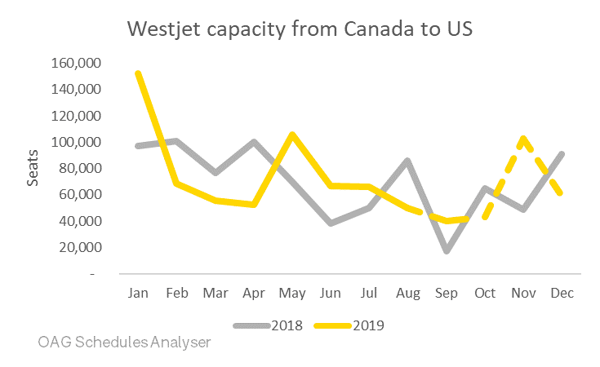 While overall capacity may fluctuate, a consistent theme has been the dominance of Las Vegas (LAS) as a destination. While this caters will to the outbound Canadian market, it has little or no relevance to the sixth freedom potential with Delta.

Coordination of future schedules, if they are to maximise the opportunity for sixth freedom flows, will need to see an increase in Westjet capacity from Canadian airports to the likes of Atlanta, New York JFK and Boston. Presumably this will be high on the Delta wish-list.