Airlines Flying Close to the Sun

Domestic Airline Capacity Heats Up This Summer As The Market Changes

It is an early and classic aviation story; Icarus may have flown, but getting too close to the sun resulted in a tragic ending; is the US domestic market close to overheating?

There has never been a better time for network experimentation, spare capacity, pent-up demand focussed on domestic flying, bargain airfares and accommodation just waiting for those weary travellers. No wonder the US domestic aviation market is booming; or is it? Is this just a short-term “dash for cash”, an experiment, or the beginning of a change in the US domestic market?

We’ve explored key data points to see what is really happening and more importantly how much will continue in the long term.

Not Quite An Aviation Recovery

The first thing to stress is that despite the positivity the level of domestic airline capacity in the United States is not quite back to 2019 levels. Domestic capacity is currently running at around 75% of May 2019 levels and assuming capacity holds will reach 88% of July 2019 numbers which would certainly reflect both growing demand and perhaps more importantly market confidence as vaccination rates and infection levels fall further. Unfortunately, the same cannot be said for international capacity that continues to be at just 45% of May 2019 levels and 69% of July 2019 volumes; and that is of course assuming every border opens by that date; an unlikely scenario. 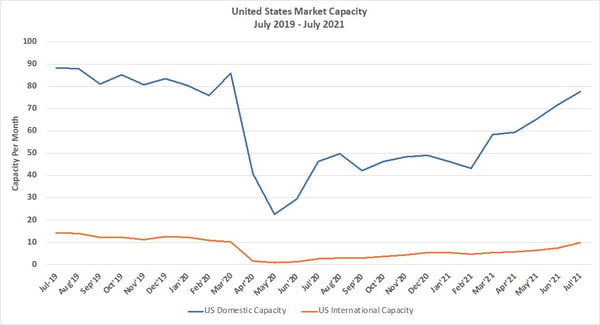 At the start of the pandemic expectations of a recovery were initially for within three months, then year-end 2020, and then perhaps shockingly by the second half of 2021; the reality is that this event has taken a longer toll on the aviation industry than anyone had hoped. A recovery is underway, but not as quickly as anyone would wish for.

But Domestic Airline Capacity Is Rebuilding

For many reasons in every market around the world domestic capacity and subsequent demand is rebuilding faster than on international routes; it was an early and key learning from the start of the pandemic event. The spring break holiday season in the US appears to have been the catalyst for the recovery in demand and capacity; it also of course coincided with the rapid rollout of vaccine programmes in the United States. Domestic capacity will have increased by some 80% between the low point of February and the expected July 2021 seats; that is certainly the start of a bounce back. 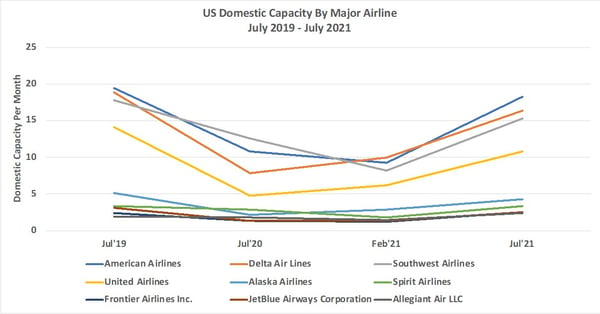 Leading the airline capacity recovery since February 2021 are Frontier Airlines, American and Southwest and it is perhaps no coincidence that Delta Air Lines and United Airlines who have perhaps been slightly more cautious throughout the pandemic than many of their peers. An alternate way to look at how capacity has developed in the aviation recovery is to compare by sector. Although not seismic, low-cost airline share has increased by just over two percentage points perhaps slightly busting the that the whole domestic recovery has been based around low-cost carriers; legacy airlines have been active as well. 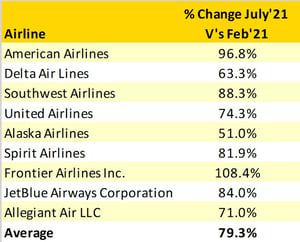 An 88% recovery in the domestic airline sector by July (considering the depths experienced in February) would be quite remarkable, equally remarkable is who are the major winners in the capacity; the expectation and much of the press has been about growth in Florida and other sunshine states and whilst that is the case at least in percentage terms they are beaten by some other less high-profile States.

It is not very often that Montana, Wyoming, Idaho and Mississippi appear at the top of an aviation list but in terms of percentage growth of capacity since July 2019 they lead the way. Part of the explanation may be a demand for outdoor vacations in less densely populated locations as a result of the pandemic or equally a growing outbound demand; either way, their appearance makes a welcome change.

In Montana, the near 150,000 increase in capacity is based around a doubling of seats from Bozeman and a 40% increase in Glacier Park; an airport rarely mentioned in any aviation context!

Every major carrier it seems sees something in Montana:

Proving that there is more to Idaho than just potato’s the State’s largest scheduled airline Alaska have increased capacity by one third in two years with American Airlines in actual terms adding the newest capacity with some 430 extra seats a day. Boise is the winner in additional capacity with some 47,000 new seats on offer, but Idaho Falls has a very strong 74% capacity growth in two years: probably beyond the wildest hopes of the airports commercial team.

And of course, Florida continues to sink under the additional capacity being provided for the sun worshippers and theme park addicts. With an additional 1.1 million seats in July 2021 compared to two year earlier the volume growth is over seven times larger than any other States and that growth is not just to Orlando and Miami. Fort Myers (+73%), Pensacola (+53%), Destin Ft Walton (+64%) and Miami (+ 33%) have all seen very strong growth but all are usurped by Key West International where capacity has increased by over 140% in two years. Some achievement in two years and a pandemic, but also a clear reflection of airlines finding new routes and services to operate directly rather than via a hub and it is the development of those thin non-stop markets that will be the real test from a sustainability perspective.

In the last few months, there has been an almost daily update from US carriers around new airport pairs being added and, in many cases spoke-to-spoke services. A combination of factors appears to be driving the rapid growth; demand for non-stop flights, underutilised aircraft capacity, pent up demand, a dash for cash resulting in airlines being flexible in experimenting in new markets and of course some solid marketing support from some markets looking to recover their own revenues.

The table below shows how airlines both dropped and have subsequently added back airport pairs over the last three years; the total does of course include some elements of double counting airport pairs. In total over 1,150 new airport pairs have been added since July last year; a staggering 33% growth that will undoubtedly have created a more competitive market with more choice for travellers and in the current environment some very competitive selling fares; all of which portrays a market energised with growth, financially strong and capable of absorbing such growth, but is that really the case? 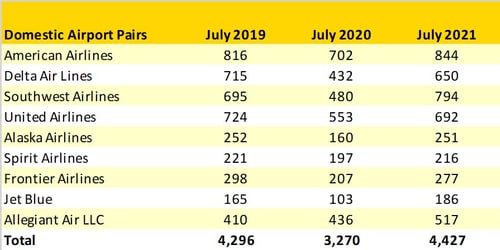 The basis of much of this capacity growth is built around airlines seeking to survive in the middle of a global pandemic when international capacity is very restricted. For some airlines, such as Allegiant and Frontier that are flexible in their network structures and “dip in and out” of markets on a seasonal basis such network experimentation is normal and some of the airport pairs will probably return next season. But for some of the more structured airlines that are perhaps normally locked into international connecting traffic the pressure to return to only operating a hub and spoke rather than a spoke-to-spoke network will likely become irresistible over time; it is just the nature of the beast that a hub can become. But what does that mean for the future?

It is very easy to get caught in the moment and Covid-19 has certainly been a moment. Future airline networks will not be as extensive as before and legacy carriers are already reshaping their networks and scaling back their seasonal international networks. The reopening of international markets will also ironically absorb some of the capacity that is currently being used on domestic services and the legacy carriers are likely to retrench back to a more rigid hub and spoke model.

For the low-cost and ultra-low-cost carriers what we have seen in the last year may become a key element in their future strategies; experimentation, “use it or lose it” messaging to local communities and market stimulation rates will be key factors as we look forward. Spirit Airlines currently have some 126 aircraft on order; Frontier a mere 150 and with Avelo and Breeze building their plans then the capacity looks to be promising for US domestic services and that has to be good news for all airports of all sizes across the United States in the next few years.