The $40 Billion Market That Remains Bugged

For many airlines the Europe to United States market is the most profitable part of their network. July is traditionally one of the most lucrative months, the business market remains strong, leisure traffic picks up and yields are at their strongest for many carriers; that tradition is not happening this year for sure. With the European Union and United Kingdom classifying the United States as a Red-Light destination then only the chosen few or those seeking quarantine will be able to travel.

The implications for the airlines are immense. On an average day some US$46 million of revenues are generated across the “pond” and for at least one airline it is literally their billion-dollar earner and their most profitable market. For others, their transatlantic services provide the bridge for significant connecting traffic flows from secondary markets in both Europe and the United States; without the bridge other large traffic flows cease to function and capacity would likely be halved. So how big is the market and what are the implications.

Comparison of the scheduled services from Europe to the United States that were planned to operate in the filing of the 20th January and those filed this week reveal how deep the cuts are. Across the top ten airlines over 80% of planned capacity has been cut and with Lufthansa likely to be looking to now cut capacity and the increasing rates of cancelled flights we are seeing that could be closer to less than 10% of flights operating compared to last year. In July 2019 there were some 4.6 million seats operated in each direction, in January the plan was for some 4.7 million and this week the plan is for 1 million to be operated; the latest news may reduce that to closer to 750,000.  Big numbers and a huge revenue and profit impact for all concerned.

Geographic advantage; short term disaster - The value of the transatlantic market cannot be underestimated and the subsequent impact on cash reserves for the next few years will be significant. For many years we have noted the geographic advantage that British Airways enjoyed in the transatlantic market. That previous enjoyment may be more a major frustration as the airline is clearly over exposed in the current operating environment, longer term it will of course return to an advantageous position.

Taking just one network example, the US network is worth some US$6.9 Billion to British Airways when the local and connecting markets are added together each year. It has for the last few years been a market of growth for the airline with services launched to Nashville, Pittsburgh and Ft Lauderdale/Hollywood amongst others. 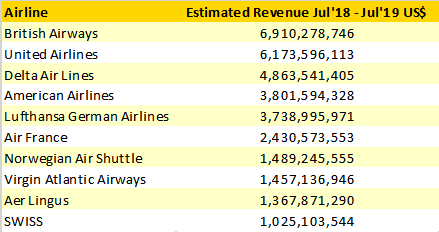 On an average day in July, the airline would operate some 48 scheduled services across the Atlantic, each flight deploying one aircraft’s daily operation. Making an allowance of 15% for aircraft integration and maintenance coverage etc then that amounts to around 55 aircraft a day being allocated to the market by British Airways or more simply 42% of the long-haul fleet. A staggering proportion of capital to be invested in one market.

A well-connected market - The transatlantic market is complex, heavily reliant on connecting traffic as anyone who has waited on a plane for the last five connecting passengers will confirm. Those connecting flows are tightly scheduled, minimising connecting times with indirect routings frequently cheaper than the direct options.

The table below shows the mix of traffic for the top ten scheduled airlines last July; with the notable exceptions of Norwegian (no longer operating) and Virgin Atlantic (thank heavens for Virgin Holidays!) every airline relied on connecting traffic for more than 50% of their bookings. In the case of Lufthansa over 80% of bookings were connecting, perhaps confirming the relative weakness of their local market sizes in both Frankfurt and Munich.

It is obviously great news that Europe is re-opening and that travel restrictions are being lifted with countries outside of the European Union, however, whilst travel from China, Australia, South Korea and Japan represents a breakthrough moment the lack of free movement to the United States remains a major problem for all airlines operating in that market.

The risk of an inbound spike from the United States into Europe may be a risk too high for consideration at the moment but come the next planned review of approved countries in two weeks the airlines will be wishing for those bugs to have been removed. I suspect it may take slightly longer than a fortnight for this bug to be resolved though