The Strategic Use Of Cancellations: How Airlines Managed Schedules During Covid

“Unprecedented” is a word we’ve heard a lot over the past 5 months. It’s a term which very much applies to the airline industry. Never before have airlines had to adjust so rapidly and at such scale to a changing external environment.  At OAG, we manage the largest network of airline data in the world. We handle over 120,000 schedule changes and track 110,000 flights everyday processing over 1.4 million flight status updates to serve a very wide range of purposes and interests. Never before have we seen anything like the number of schedule changes and adjustments that airlines have had to make to stay on top of the crisis in such a short space of time.

So, we have taken a look back at our historical data during this period and it reveals some interesting insight into the different strategies’ airlines employed to manage their schedule through this time. Drawing on a few examples, we share what we’ve found.

In the United States, the number of reported cases of COVID-19 had not yet started to rise when airlines started changing their schedules. The initial reaction was to cancel some flights, a necessary action as other countries started to close their borders to foreign arrivals.

The chart below from OAG’s OTP dashboard shows clearly that last minute flight cancellations rose sharply before the end of March 2020 and preceded the rise in confirmed cases in the USA by a few days. The number of cancelled flights remained high over the following two weeks as airlines made rapid changes to their schedules, reducing the number of scheduled flights from almost 27,000 on 23rd March to just 12,000 by 14th April. 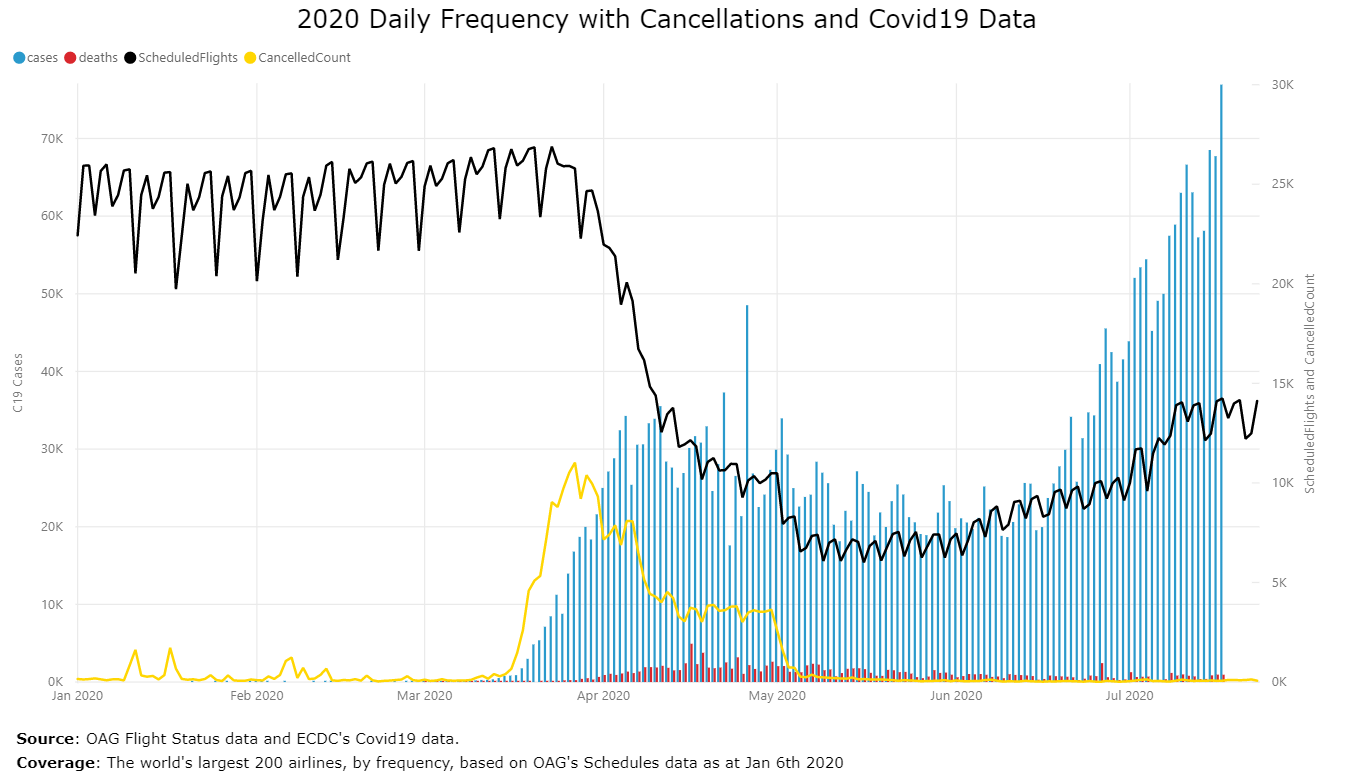 There were then a couple of weeks when rapid schedule reductions appear to have paused as airlines were taking stock of the situation, perhaps hoping for a more swift return to the skies than has actually happened.

Southwest Airlines was typical of the airlines in this market, initially responding with large numbers of flight cancellations. However, looking at operated and cancelled flight data for Southwest Airlines now, it would seem that the airline was determined to return to a point of schedule stability and predictability as soon as possible. Of course, these are qualities which provide huge reassurance for passengers thinking about travelling in these uncertain times and presumably achieving passenger confidence was a key consideration.

From the start of May Southwest Airlines has been operating a schedule with very few cancelled flights. As the weeks have passed, the volume of flights has slowly increased and by 23rd July the airline is operating around two thirds of the number of flights that it was before the crisis. 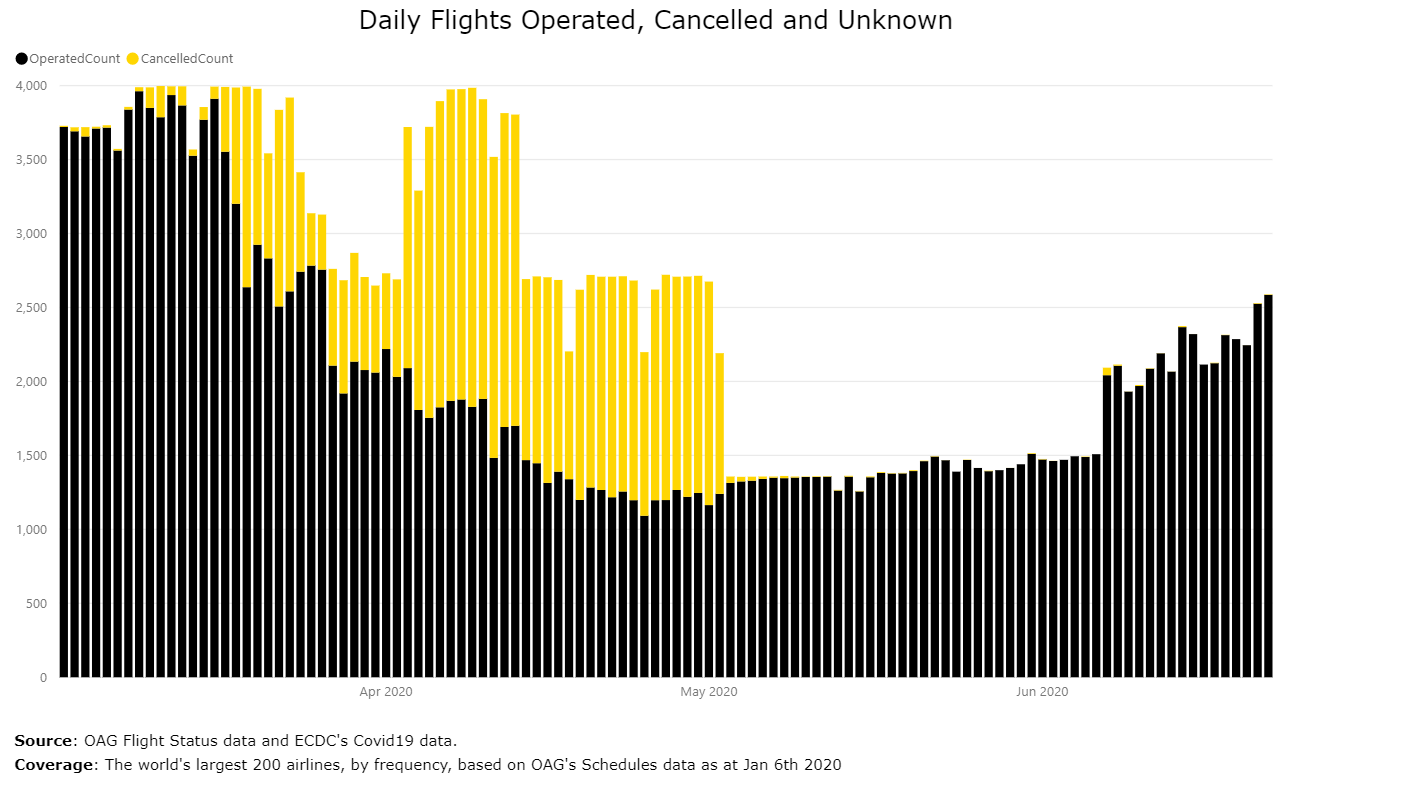 Across the pond, the approach of British Airways was quite different. Each week we have seen the airline adjust capacity for the following 3-4 weeks, reducing the number of flights in the schedule for those weeks but largely leaving the schedule untouched beyond this point.

The approach appears driven by very different concerns. Rules in the UK about refunding passengers when flights are cancelled means that the airline has chosen to cancel previously scheduled flights as late as possible in an effort to reduce the number of refunds due at any point. Of course, a major consequence of this is that payments made to British Airways before the pandemic for travel since March have remained with the airline as long as possible, enabling them to boost their cash position. The effect is to present a fairly confident schedule but it is one with little chance of operating and runs the risk of exacerbating consumer confidence in the longer term.

Looking ahead at the British Airways schedule, especially in combination with forward booking data, industry insiders can be fairly sure that further flights will be removed from the schedule - effectively cancelled from the passenger perspective - but for now passengers holding those bookings are left in limbo, unable to claim refunds until the cancellation of their flights are formally announced.

Another airline grappling with when to adjust their schedule in the face of widespread travel restrictions and limited demand is Emirates.

Looking at the total number of flights scheduled by week at various ‘snapshots’ shows that since mid-March the airline has been progressively planning fewer flights, often months ahead. However, despite the prospect of almost no flights operating in the proceeding weeks, the airline has resisted removing all flights further out.

For an airline such as Emirates, whose Dubai hub relies on a mix of travel to and from the city, blended with a large volume of sixth freedom traffic connecting through the airport, the need to maintain a schedule which continues to facilitate connectivity has surely played a part in their decision-making. The sad reality, however, has been that there simply hasn’t been the traffic to support this and when we look at what actually operated, the airline has continually revised its schedule, flown a tiny fraction of its fleet through April, May and June, but avoided the need to cancel flights in the run up to operations. 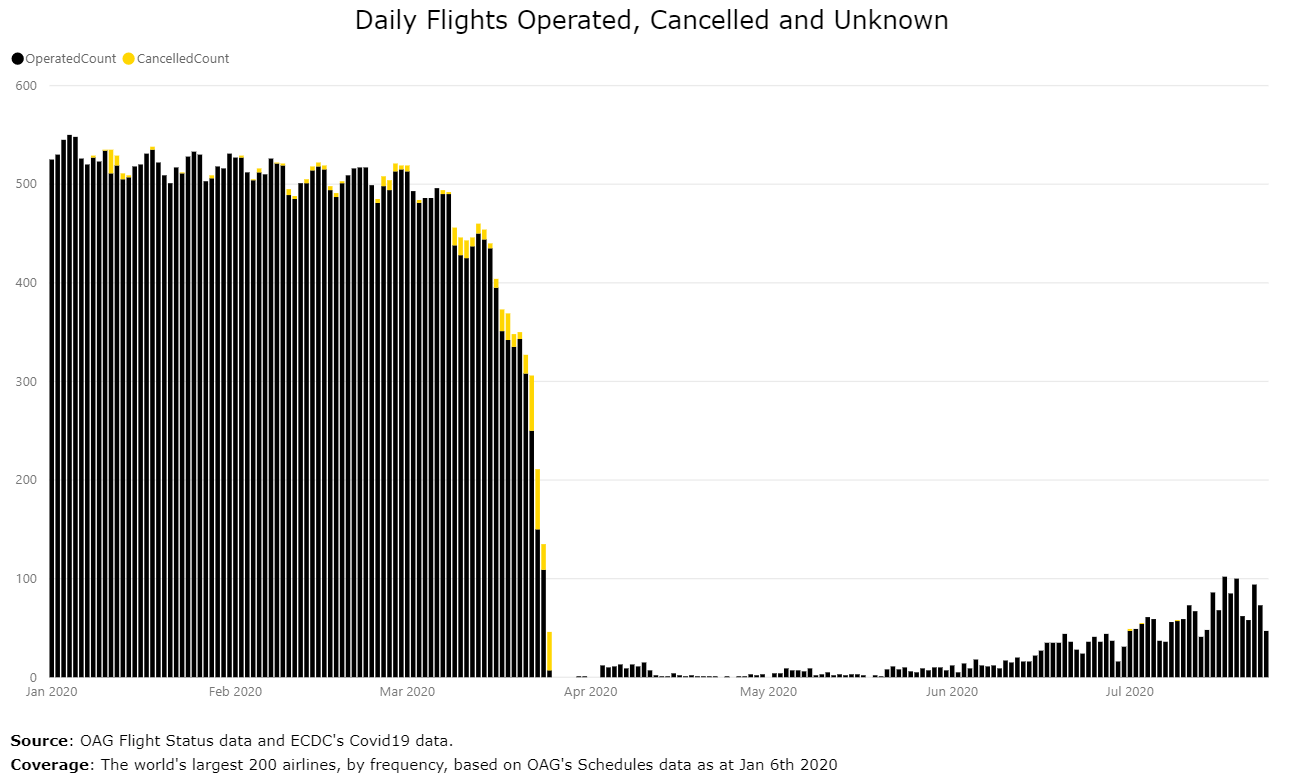 All Nippon – Strategic Use of Cancellations

In contrast, an airline which has maintained a high level of scheduled flights combined in conjunction with a policy of being prepared to cancel flights right up to the wire, is All Nippon Airways. In May, to use that month as an example, over 40% of all operations by the airline were on the top 20 routes. Japan is known for its strong domestic market, and the high frequency of air services on some of its busiest routes.

The single busiest route at the moment for All Nippon Airways is Haneda to Fukuoka which boasted 19 frequencies each day in each direction in the May 2020 schedule. While the number of late cancellations was high, at over 80% for most days in May, the high frequency of flights on many routes has meant that there are still flights available every few hours so passengers can still reach their destination, albeit with a bit of a delay. In a climate where passengers are just grateful to be able to fly, this seems to have worked for the airline, at least until now. 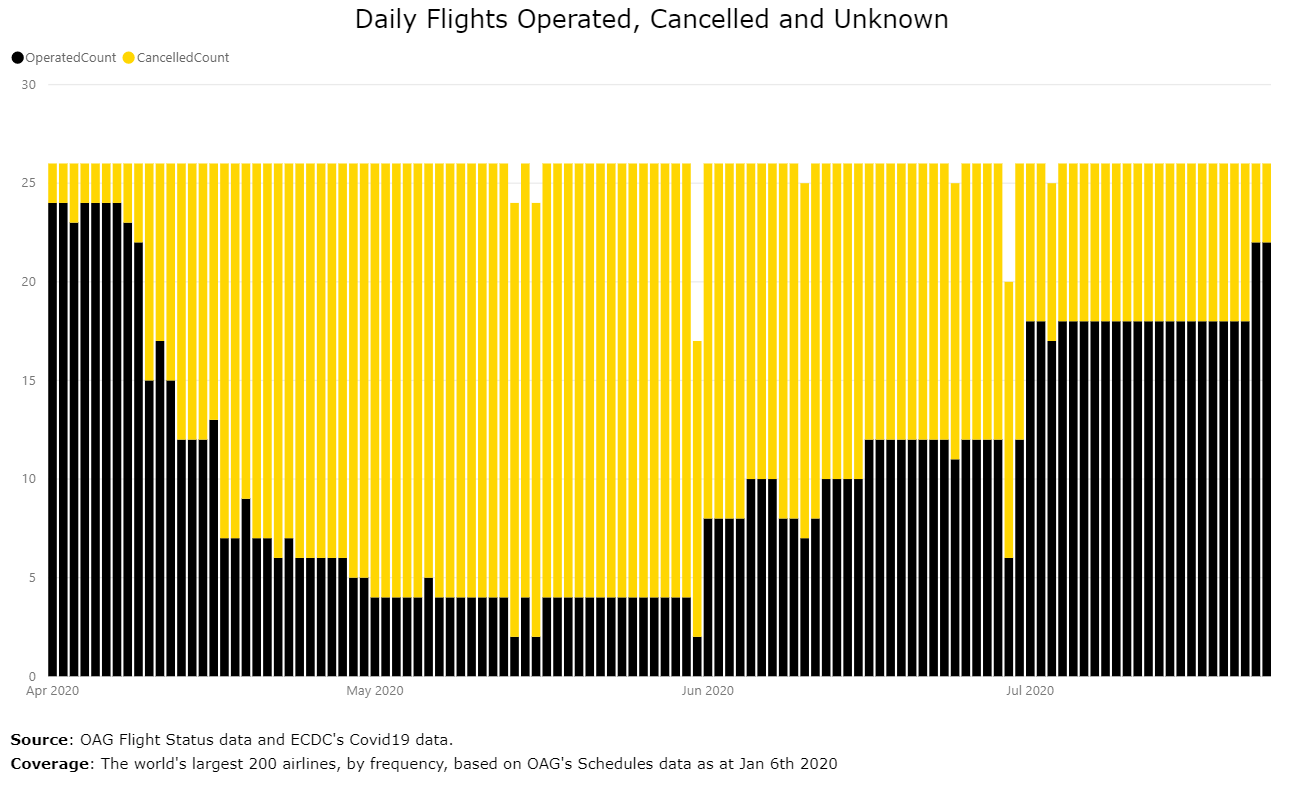 There is clearly no right or wrong approach for an airline when it comes to planning their schedule or cancelling flights during a global pandemic. At the beginning of the crisis cancellations were an inevitability as airlines grappled to respond to a fast-changing situation of border closures and plummeting demand. As the weeks and months have passed, financial priorities have for some dictated their approach to changing their schedule and cancelling flights. Arguably, the sheer complexity of the network has made the retention of flights in the schedule, with the option to cancel as required, the more manageable option for some carriers, especially the large legacy airlines.

Low cost carriers, many of which simply grounded their fleet for a period, consistent with a business model which prioritises cost management above all else, may be taking a different path now. In this part of the market we are seeing a pattern of returning capacity in a gradual and measured way, with very limited cancellations and a schedule into the future which does not retain elements of the pre-covid booking environment. Perhaps the fact that their bookings typically come direct to the airline, along with abundant passenger data – search behaviour, ancillary spending history, travel frequency – means these airlines have more information with which to predict demand in the coming weeks and months. Or maybe they place a higher value on ensuring they can deliver the flight that their customer has booked, and meeting traveller expectations.

Either way, we are seeing different airlines take very different strategic approaches to the use of flight cancellations.