Half of all Chinese who live in the US reside in either California or New York, and the two-way flow of Chinese Americans keeping in touch with their roots may be a key factor in the resilience being seen in some parts of the aviation market. Tourism flows may be affected by the current spat between the respective Governments, but friends and family always come first. 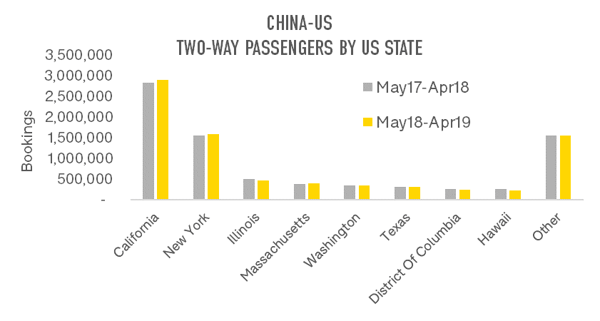 In the year to April 2019, two-way passenger numbers are up a meagre 0.4%. As the year has passed, so the deterioration in traffic growth has increased, such that by February 2019 passenger volumes were tracking below February 2018 numbers and continued to do so through to April. 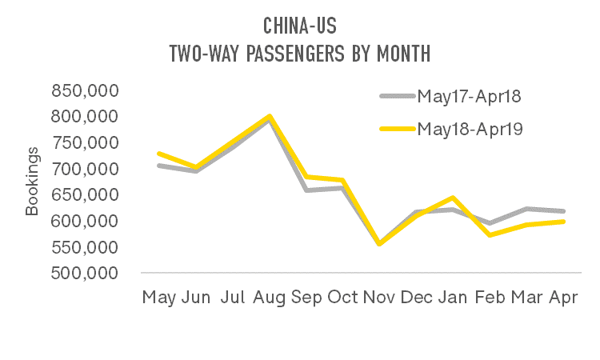 With Chinese outbound travel still growing rapidly compared to most other markets, and Chinese visitors among the highest spending, U.S. tourism authorities should rightly be concerned. However, as ever, a general trend can disguise wide variation within it and what we see is that the US States which account for the largest volumes of travellers back and forth, California and New York, have both seen growth a little higher than the overall U.S.-China trend. For California, passenger volumes are up by 2.6% and for New York the figure is 2.5%. Dig a little further and we see that the two airports handling most traffic to and from China, Los Angeles International Airport (LAX) and New York’s JFK Airport (JFK), are showing a greater degree of resilience when it comes to Chinese traffic. Los Angeles and New York also happen to be the cities with the largest number of residents of Chinese descent, around 500,000 and 750,00, respectively.

At LAX traffic for the year to April was up by 8.5% and only dipped below the previous year in March 2019. At JFK, growth has been 3.9% and while November 2018 saw a year-over-year drop in traffic, January 2019 was more than 10% above the previous January. While it may be that with Chinese New Year falling a week earlier in 2019 this contributed to the difference it is unlikely that this alone would account for such a large increase.

In some ways it’s not surprising that traffic to LAX has increased; the airlines flying back and forth between China and the U.S. have increased the number of flights to LAX dramatically.

The 12 months to August 2019 saw 6% more flights into LAX than in the preceding year, although 90% of the additional 262 flights were operated by Chinese carriers.

Of the 15 routes being operated in August 2019, two are new in the past 12 months. China Southern launched an operation from Shenyang in North East China while Hainan Airlines have commenced operations from Xi’an. A scheduled service between LAX and the new Beijing Daxing International Airport makes its first appearance in the schedule in August 2019 operated by China Southern. 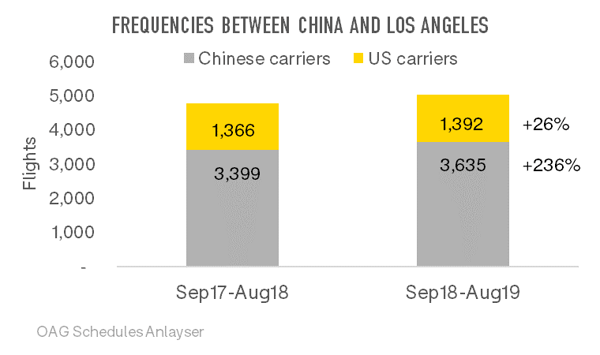 Making the Most of the LAX Gateway

Los Angeles clearly benefits from having a resident Chinese population in the vicinity but an increasing number of travellers are also choosing LAX for connections between China and elsewhere in the U.S. In the past year LAX has become the top U.S. gateway for connecting traffic from China. 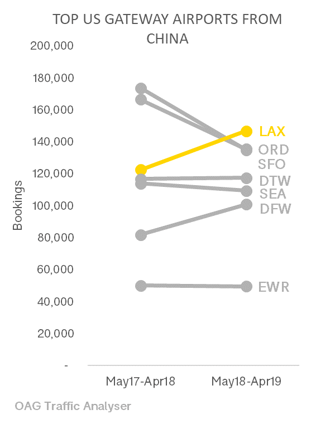 In contrast, other leading gateway airports have seen their share of connections decline. For Chicago O’Hare (ORD) the loss has been nearly 20% with a similar scale of drop at San Francisco (SFO).

For those passengers from China who choose to connect at LAX, where are they going? The number one destination is Las Vegas (LAS) which accounts for 8% of all onward connections to the U.S, or 11,000 passengers in each direction. Next is Phoenix (PHX), then Boston (BOS) and San Francisco (SFO). 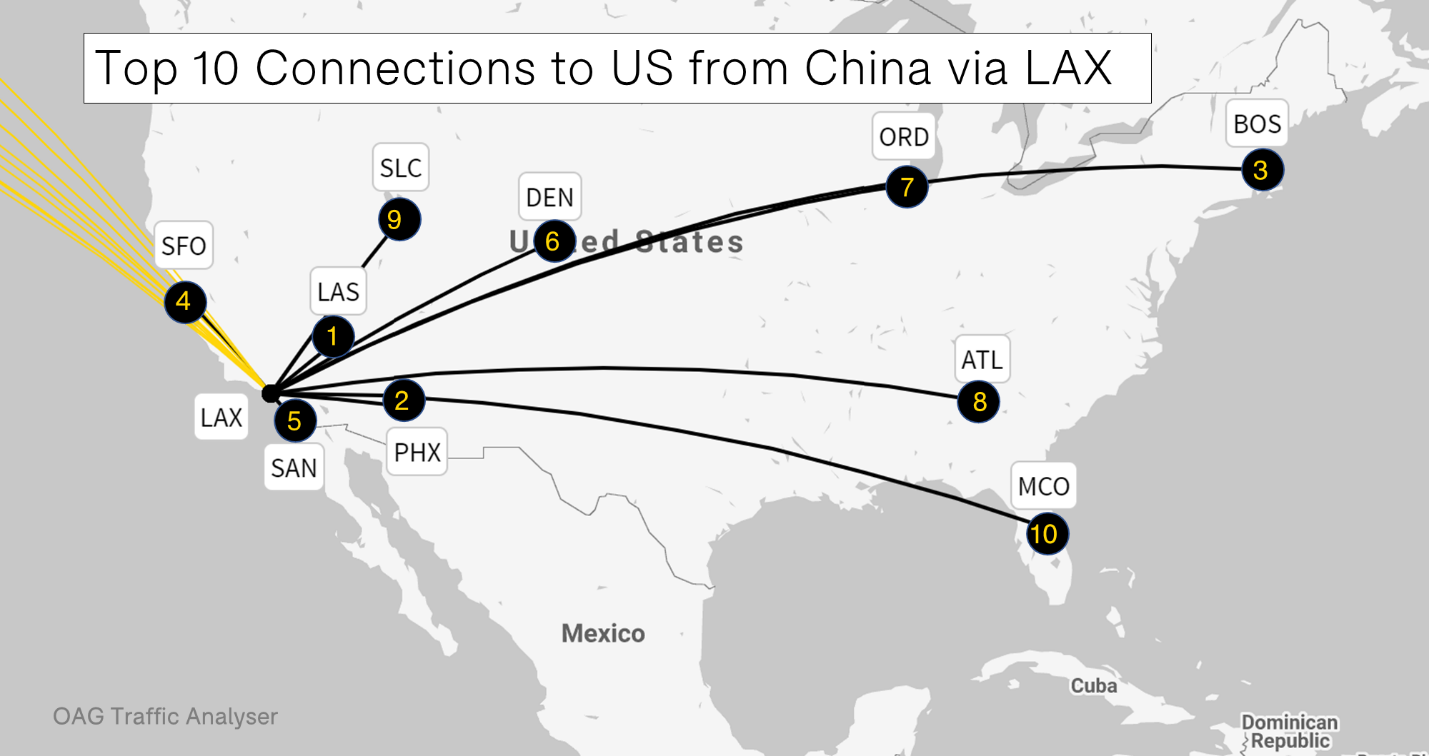 LAX – Over 1 Million Passengers to & from China

When taken together, the various flows of passengers using LAX to fly to and from China amounted to more than 1.1 million passengers in each direction in the past year. 45% of them were simply flying on one of the direct services, while 20% had an origin in China but used a Chinese airport to connect to LAX. A further 12% made a connection at LAX to elsewhere in the US having started their journey somewhere in China and flown to LAX either directly or indirectly. 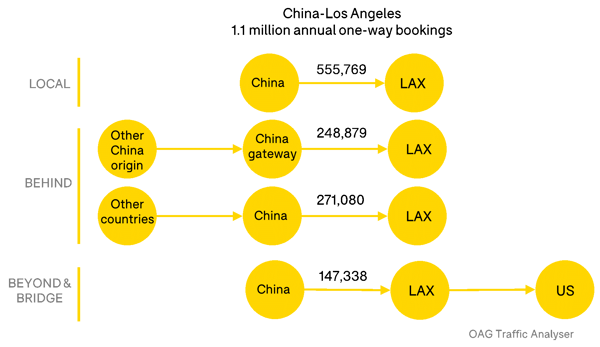 The growing strength of the Chinese hubs is apparent and, with so much direct air service to China, LAX is a beneficiary. The final 22% of traffic between China and LAX consists of passenger travelling from elsewhere in Asia but connecting at a Chinese airport to make their way to LAX. Almost all this traffic uses one or other of the large Chinese carriers. Thailand is by far the largest of these ‘behind’ country markets, accounting for 24% of this traffic, followed by Philippines, India and then South Korea.

The sizeable local community living in Los Angeles but with ancestral roots in China is providing a strong foundation for the air services to China from which airlines, especially the Chinese carriers, can be assured of continued traffic. It would appear that this is a contributing factor in the resilience being seen in this particular market at this time.