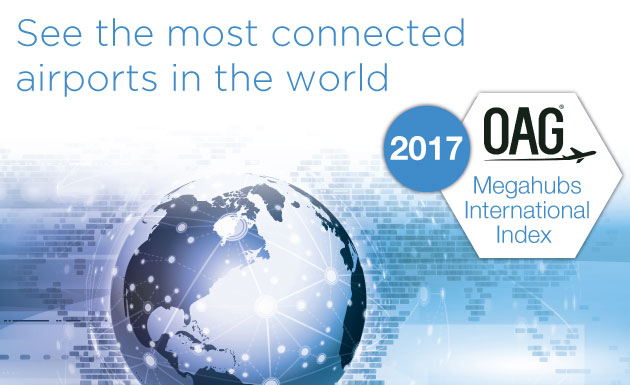 This year, in the 2017 edition of the Megahubs series, we turn our attention to the world’s most internationally connected airports. This edition represents the widest geographical spread of airports in our Megahubs series yet, with 16 airports in Asia Pacific,  15 in North America, 14 across Europe, the Middle East and Africa regions and  5 in Latin America. Alongside the Top 50 International Megahubs, we also present the Top 25 Low Cost Megahubs.

Europe’s biggest airports feature prominently in this year’s International Megahub index with the Top 3 places going to some of Europe’s leading hub airports.  London Heathrow (LHR) takes the top spot, as the airport with the highest ratio of possible scheduled international connections to the number of destinations served by the airport. Heathrow is also the only UK airport to feature in the Top 50 list. Frankfurt (FRA) and Amsterdam (AMS) take second and third place respectively.  Amsterdam (AMS) also features in the Top 25 Low-Cost Megahubs, in 17th place.

Two of the world’s biggest airports, Atlanta (ATL) and Chicago (ORD) also make it into the Top 50 International Megahubs, at 8th and 4th place respectively. It is testament to the sheer scale of operations at these airports, both with 80% or more of their capacity operating on domestic services, that they rank so highly on international connectivity.

Asia Pacific’s biggest airports account for almost one third of the Top 50, with 16 airports across the rankings.  Singapore (SIN) is the highest ranking international megahub in the Top 50, in 6th place, closely followed by Jakarta (CGK) in Indonesia.  Singapore (SIN) also features in the Top 25 Low Cost Megahubs index in 3rd place.  China’s three biggest airports, Beijing (PEK), Shanghai (PVG) and Guangzhou (CAN) make it into the Top 50.

The Most Connected Airports in the US

The Megahubs US Index, a spin-off from OAG’s main Megahubs International Index 2017, focusses on domestic connectivity, ranking US airports in terms of how connected they are in the domestic market.

Chicago O’Hare Airport tops the list, some way ahead of the other major hub airports at Atlanta, Charlotte and Dallas-Ft.Worth, ranked second, third and fourth, respectively.

The Megahubs US Index includes connections between all scheduled airlines so the potential for passengers to self-connect between flights, including low-cost carriers, is taken into account. The fifth place ranking for Denver Airport, where Southwest Airlines operates 44% of capacity, shows the potential for low cost airline connectivity.