The last weekend in May brings a major public holiday in the United States with Memorial Weekend a peak period for travel with typically Friday the busiest day of the year. Chances are that nearly every seat across the domestic networks of all carriers will be taken as families travel home to share the long weekend.

With that in mind we thought it would be interesting to see just how much capacity has been added over the last ten years on one of the busiest days for travel and crucially if more seats have been added.

Reassuringly, aside from a short period between 2012 and 2014 available capacity has increased every year with some 2.9 million seats on offer this coming Friday; a growth of 4% over last year’s level and a very solid 20% up on the amount of capacity on offer in 2014. 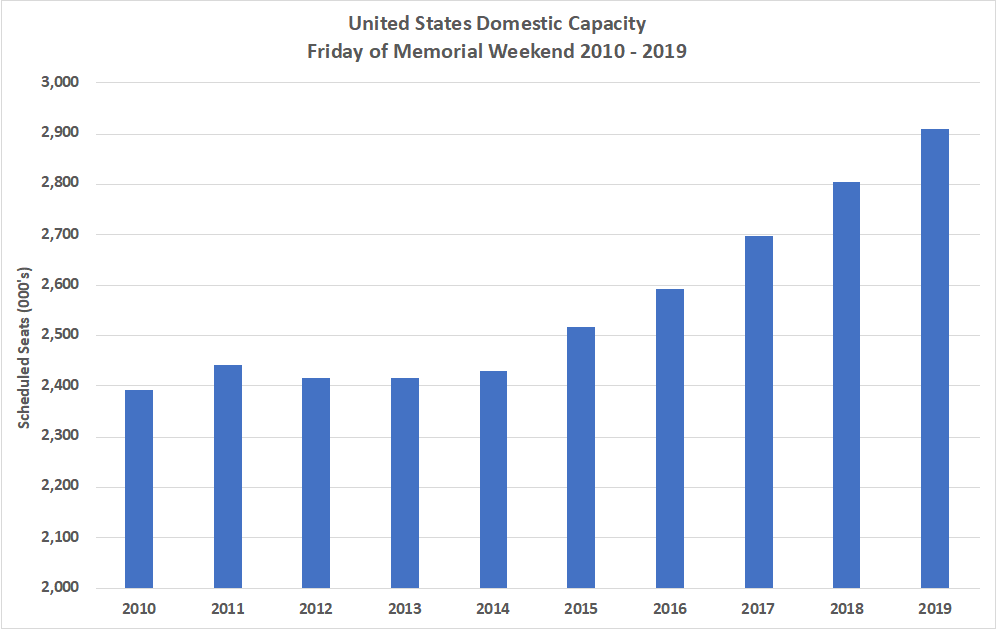 For many travellers reaching their final destination will probably require a connection via one of the many powerful hubs in the United States and it would seem that there will be plenty of seats offered through those airports on Friday as our analysis of the top 10 airports below highlights. Atlanta perhaps to no one’s surprise will be the busiest airport in the United States for domestic services with nearly 44,000 seats more than second placed Chicago O’Hare and then Dallas Fort Worth. Interestingly though, no New York airport appears in the current top ten, or indeed has done for the last ten years; La Guardia tops the New York airports in 15th, Newark is in 17th place, JFK in 20th so just perhaps it will be a quiet weekend in New York!

Airline consolidation results in a slightly distorted picture when looking at capacity by airline for this coming Friday. The conclusion of the American Airlines/US Airways merger in 2016 makes it look like the airline almost doubled capacity in one year whilst the United Airlines/Continental merger in 2011 had a similar impact on their 2012 data. That said, for three airlines to each be providing over half a million seats (and cups of coffee) on one day is a remarkable measurement to the scale of domestic services across the United States.

Ultimately, operating some 2.9 million seats across all the airlines on one day reflects both the complexity and scale of operation that these airlines provide every day of the year alongside their numerous service partners. And this Friday it is very likely that nearly every seat will be occupied; so, if you are one of the lucky few who do have an empty seat next to you; then it will truly be a memorable experience.