Once again, London’s Heathrow Airport has come out ahead of its rivals for the title of world’s most internationally connected airport in OAG’s Megahubs Connectivity Index.

Allowing for the number of destinations served from the airport, passengers using Heathrow on the busiest day for global aviation in 2019 have a wider range of possible international connections between inbound and outbound flights than at any other airport in the world. The index considers all connections which are feasible between scheduled flights adhering to the airports’ own Minimum Connect Times, which can be made within a six-hour window of a flight arrival and where at least one is an international flight. At Heathrow there are over 65,000 possible connections on the busiest day for aviation and while the Megahubs Index score for LHR is slightly below where it was a year ago, the airport continues to perform well ahead of the competition.

While there are many ways to rank the top airports in the world, the OAG Megahubs Index reflects both the scale of the airport operation in terms of destinations served and the number of inbound and outbound flights, as well as the fundamental scheduling which makes some airports such successful hubs. In some instances schedule co-ordination, which ensures waves of inbound flights are timed to provide the maximum connectivity to outbound flights is key, while for other Megahubs, the sheer scale of the domestic operation and how that connects to international air services is what drives international connectivity.

Unsurprisingly, there are 15 US airports ranked among the Top 50 Megahubs, a sign of the traditional emphasis on creating networks based around hub airports by the major American carriers. While Chicago O’Hare Airport ranks third in the 2019 Megahubs Index, the close cooperation between airport and airline that is often required to create a Megahub is apparent in the fact that at Atlanta Airport (ATL - ranked 8th), Dallas/Ft.Worth (DFW - ranked 19th), Miami Airport (MIA - ranked 20th) and at Houston Airport (IAH – ranked 21st) the dominant airline operates 75% or more of all scheduled flights. 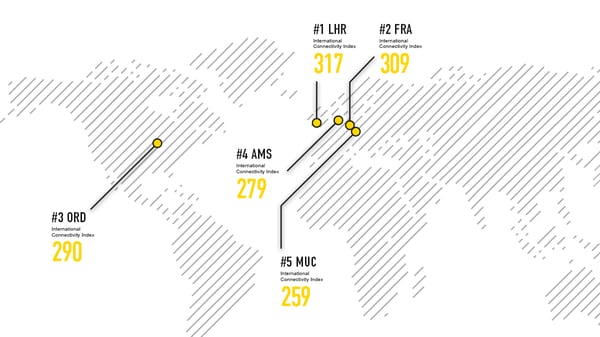 Aside from London Heathrow, a further four European airports make it in to the Top 10 – Frankfurt Airport (FRA), Amsterdam Airport (AMS), Munich Airport (MUC) and Paris Charles de Gaulle (CDG). The fact that half of the Top 10 Megahubs are located in Europe reflects the sheer density of the aviation market, with a very high proportion of flights being international, the high propensity to fly among Europeans and the concentration of flights at a handful of already very busy airports. 15% of all scheduled aviation capacity in Europe is to or from one of these 5 airports.

Elsewhere in the world, a number of major airports have seen their ranking in the OAG Megahubs Index fall. These include Dubai (DXB), Delhi (DEL), Mumbai (BOM) and Fort Lauderdale (FLL). Meanwhile, airports rising up the rankings include Munich (MUC) which moved from 11th place to 5th, Incheon Airport (ICN) which moved up to 11th place from 15th, and Mexico City (MEX) which rose to 15th from 20th position.

Size alone does not make a Megahub. There are plenty of very large airports for which the value of connecting traffic flows are dwarfed by the passenger volumes simply flying to or from the airport, and the city where the airport is located. In this respect China still has some way to go. Beijing Airport (PEK) may rival Atlanta in terms of the annual scheduled capacity but it ranks 36th, well behind Atlanta’s 8th place, as an international Megahub and its ranking has actually fallen slightly this year. Shanghai Airport (PVG) ranks higher than PEK at 25th but well behind airports of comparable capacity such as Frankfurt Airport (FRA) and Hong Kong Airport (HKG). Similarly, Guangzhou Airport (CAN) is ranked in the OAG Megahubs Index at 33, well behind CDG, ranked 7th, and Dallas/Ft. Worth, ranked 19th, which operate with a similar level of capacity. As the Chinese aviation market continues to mature, we should expect to see increased emphasis on connectivity although with the rapid expansion of the high speed rail network in China, it may be rail-air connectivity which leads the way. Time will tell.