One of the repeated comments regarding the recent near demise of UK regional airline Flybe was that it doesn’t have access to London Heathrow Airport. The lack of access to the primary hub airport in the UK means that too much of its traffic is simply carrying passengers back and forth on small routes and is not supplemented by traffic from the UK regions connecting at a hub and travelling onwards. While this is clearly problematic for Flybe, the lack of connectivity between regions and international air services, has also been bad for the UK.

Its route network reaches across the UK and into neighbouring countries. The largest airport served is Manchester Airport but even then only 10% of Flybe’s departing flights are from Manchester, and these contribute only 16% of all Manchester airport flights. 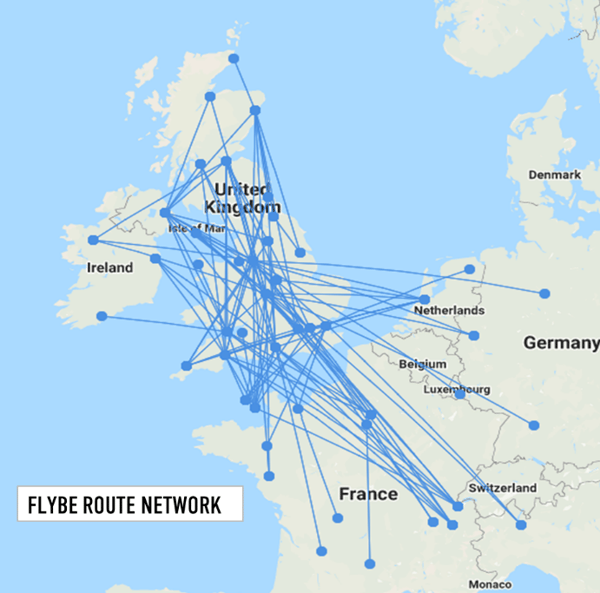 If Flybe is one of the largest regional airlines operating in Europe, Olympic Air is close behind in size, with seat capacity of 8.4 million in 2019. In complete contrast, however, the network is firmly centred on Athens with 45% of departing flights taking off from there. With the airline making up over a quarter of flights from Athens there is plenty of scope for connectivity to other carriers, but also being very much at the heart of the network geographically centre, Athens provides plenty of opportunities for connecting the various regions of Greece. 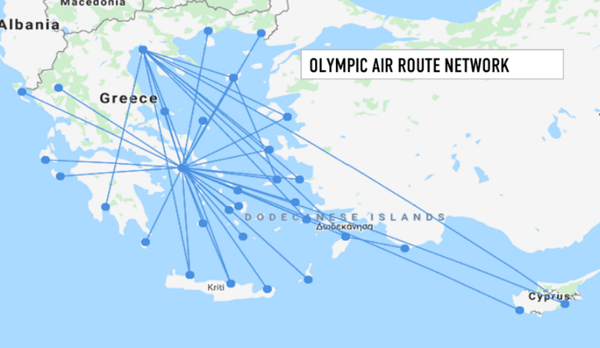 Not dissimilar to Olympic Air, Air Baltic’s route network is centred on Riga, although with so many flights heading west of Latvia there are, arguably, fewer opportunities for connectivity. As the dominant airline at Riga, operating 67% of all flights, the airline needs to work hard to create connectivity with partner airlines. 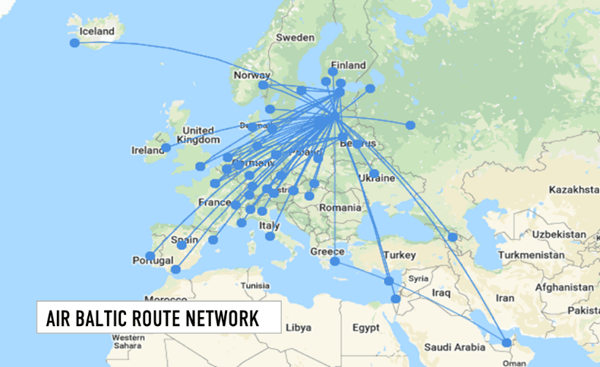 With an entirely different sort of network, Norway’s Widerøe operates a number of Bombardier Dash 8’s connecting Norway’s remoter areas. Many of the routes are operated as Public Service obligations (PSOs), making the economics a little different. Indeed, there were suggestions that perhaps more of Flybe’s routes should be operated under PSOs.

Like Flybe, Widerøe’s largest airport, Bergen, only sees 10% of the airlines’ flights leave from it and even there Widerøe only accounts for a third of all flights.

Blue Air is a low-cost Romanian airline. While Flybe was a predominantly domestic airline, only 25% of Blue Air flights are domestic with the remainder connecting Romania with various parts of Europe and a few flights to the Middle East. 27% of the airlines’ departing flights leave from Bucharest Airport but the airline is a relatively minor player at the airport, with TAROM and Wizz both larger. 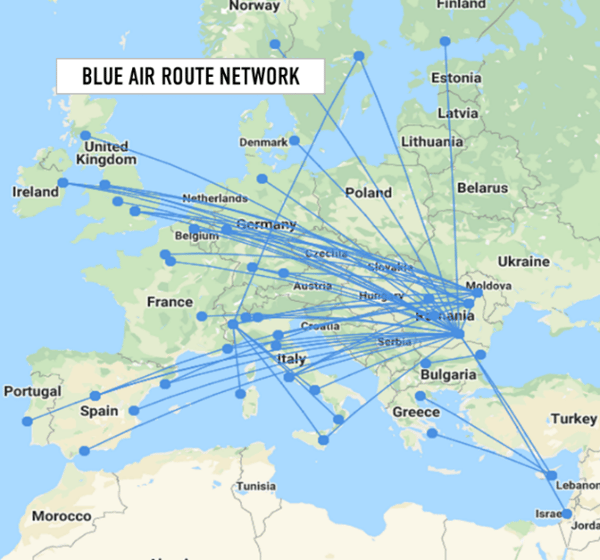 Braathens is owned by SAS and almost all flights operate within Sweden. It is the dominant carrier at Stockholm’s Bromma Airport and most of the airlines’ flights fly to or from Bromma. 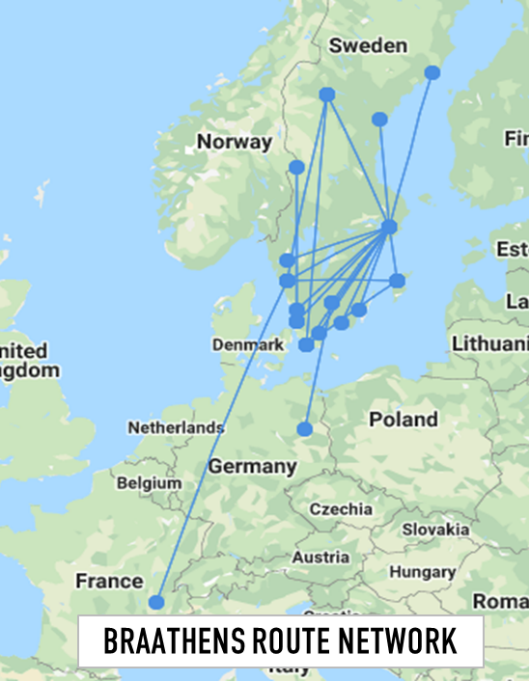 Probably more of a small network carrier than a regional airline, Luxair has little domestic air service, for obvious reasons, and is very much focussed around the Luxembourg hub. 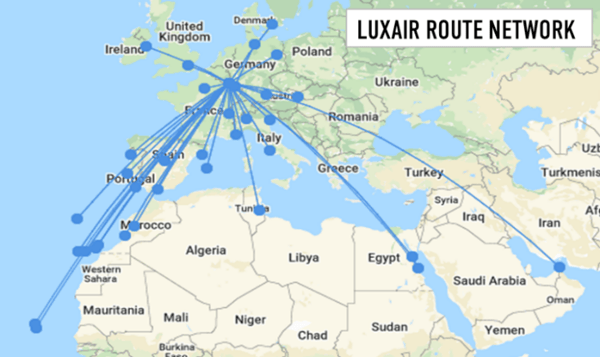 Only just a little smaller than Luxair in terms of the seats operated in 2019, Croatia Airlines, has a network centred around Zagreb. Over a quarter of flights are domestic and the airline has the largest share of flights to and from its hub airport. 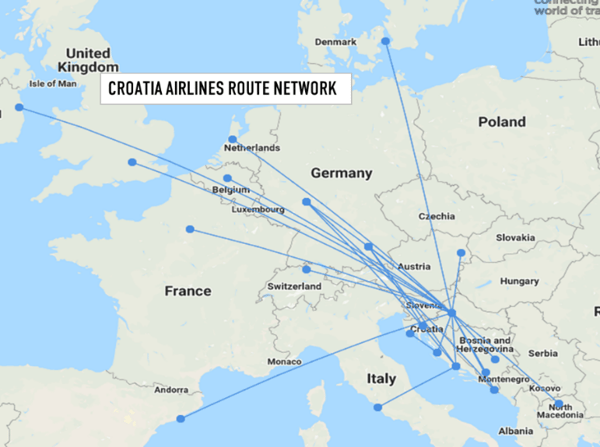 While the network map doesn’t reflect it, the largest proportion of Air Dolomiti flights depart from Munich in Germany. The airline provides regional connectivity for Southern Germany, Austria and Italy. 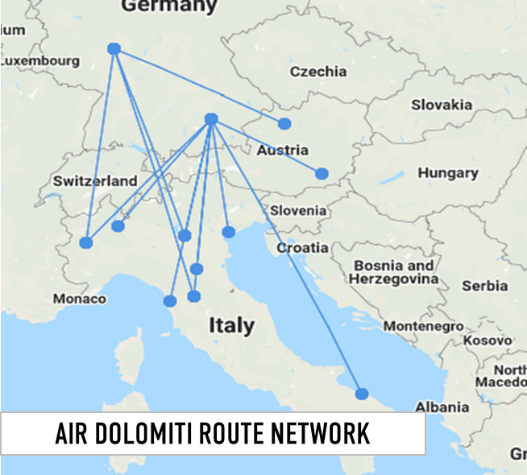 Air Corsica is a French airline connecting Corsica with mainland France. It is based at Ajaccio and while the largest number of flights depart from this airport, other Corsican airports are also connected to mainland France and Europe. 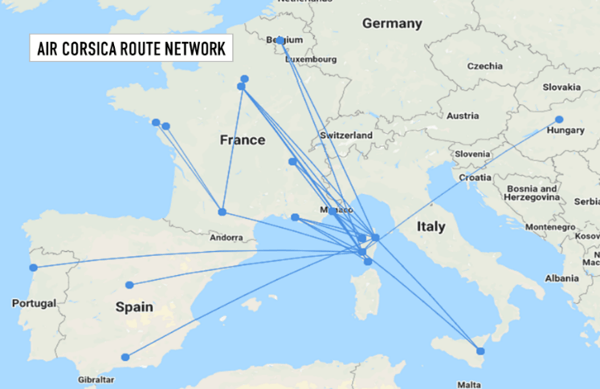 Like Olympic Air, Sky Express operates out of Athens Airport with a similar route network connecting the islands and coastal areas of the country. As the route map shows, Athens is well placed for regional connectivity and with so many of Sky Express flights operating into and out of Athens there are opportunities for connectivity beyond Greece. 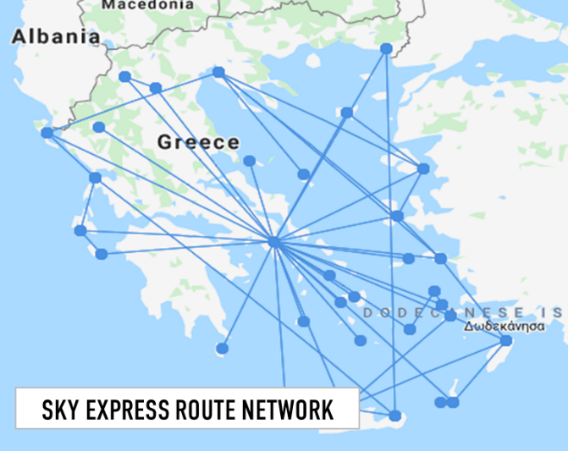 One of smallest of the European regional airlines considered here is Loganair, based in the UK. Predominantly domestic, the network reaches across the UK with the largest number of flights operating from Glasgow Airport. There is no clear hub access and even at Glasgow they operate a fraction of the flights. 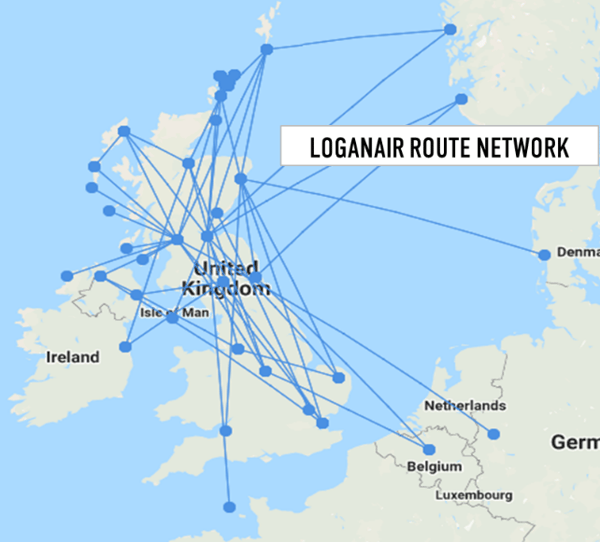 Aurigny Air Services is another UK airline, smaller than Loganair and purely domestic. Based in the Chanel Islands it provides connectivity to the islands.

So where are the insights for Flybe, or indeed for other European regional airlines? Flybe is larger than all the airlines compared here, at least in terms of annual seats offered to the market and the number of routes operated. It is also very focussed on the UK domestic market a relatively small geographic area which means the average sector length is fairly short. Many of the routes face some form of competition from other modes of transport, either car or train, even if it isn’t high speed rail quite yet.

The Flybe network stands out as particularly decentralised.  Manchester is the largest airport and only 10% of Flybe’s flights depart from there. If Manchester was a true hub for them, with every flight operating to or from the airport, then the proportion would be 50%. While much could be made of the fact that Flybe does not have hub access to London Heathrow, Manchester is a significant airport, not dissimilar in scheduled airline capacity from European airports such as Milan’s Malpensa or Athens.

In this analysis OAG has not looked at the business model of the airline – low cost or legacy – or the type of aircraft in the fleet of each airline. Arguably, regional airlines are not low-cost carriers and typically fly turboprops or smaller jet aircraft, but Flybe resembles a number of the airlines listed here. It is most comparable to Widerøe and Loganair in that the route network is primarily domestic, with no single airport dominating the network and some or many PSO routes, but both these airlines serve more airports on the periphery of Europe, places which are remote and have fewer transport alternatives to flying.

It could also be compared to Blue Air with a large network but no clear hub focus, but Blue Air is a low cost airline with a very different operating model and the average Blue Air flight is almost 1,500km compared to under 500km for Flybe, making clear that is it facilitating journeys that would be substantially less easy by road or rail.

Neither a low-cost carrier, nor a specialist in PSO’s and peripheral regions, or a network carrier able to leverage the advantage of scale, it seems that Flybe falls somewhere in between. Not one thing or another, at once both too big and perhaps too small. It seem that Flybe still has some thinking to do as to what sort of airline it is.