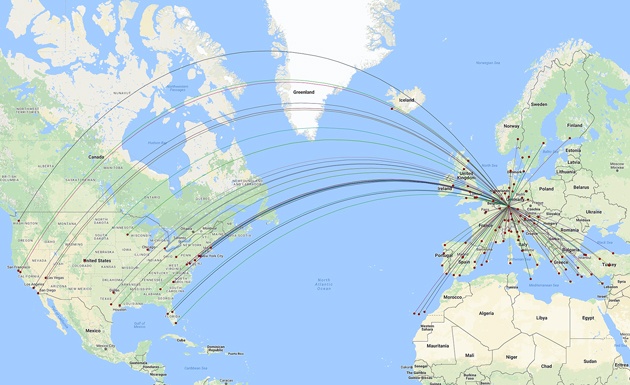 The great strength of hub airports is that they connect passengers from one point to another, quickly, effectively and quite often more cheaply than on a direct service from the point of origin. Commonly known as 6th Freedom traffic, airlines such as KLM and Singapore Airlines have built major hubs on such passenger flows.

Quick efficient connections make the hubs work. The shorter the connecting time, the better the display on the GDS screens and the faster the run between flights! Whilst the threat of an expanded laptop ban appears to have disappeared for the moment, the potential impact on those tight connections could be very significant.

Using OAG Connections Analyser, we looked at all the major European hubs and the potential impact on an expanded MCT of 75 minutes at each airport on “online connections” to accommodate the increased security, potential handover of a laptop and secondary search processes on connections between Europe and the United States.

Frankfurt would appear to be the hub airport with the most reason to be concerned. Assuming the increased MCT then some 314 possible connections are at risk. Whilst that may sound incredible, remember, every inbound flight has multiple onward connections. The multiplier effect really multiplies in cases like this. Of course, for some hubs, alternate connecting flights exist to the larger US cities where more than one daily frequency is offered but the MCT lengthens considerably in many cases.

Heathrow in the same analysis would lose some 171 existing connections with Amsterdam at threat of losing around 100 such connections. 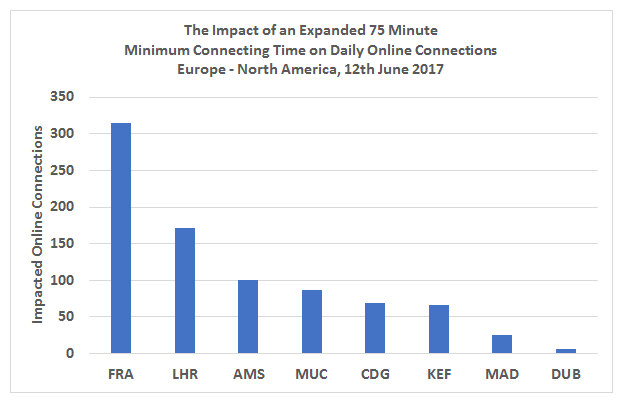 The “winner”, if there is such a thing, from any ban would appear to Dublin where only four potential connections would appear to be under threat. No doubt in the case of Dublin, US Pre-Clearance and the already extended connection times reduce the impact of any such ban.

In short, the morale of the analysis is that running is not always good for you! Short MCTs are brilliant although stressful for all but in a changing world with potentially increased security measures, many of them disappear. Which for the airlines means either changing the connections and extending the MCTs or accepting that some traffic flows may be lost. And that really is a laptop loss for them!