Is The India-Australia Relationship Hotting Up?

Until June 2019, the Indian cricket team had only beaten Australia in a 50 Over World Cup match once this century. Since June, we can say it’s twice. Cricket may not define a nation but there is no doubt that India’s star is rising. The question is, when it comes to other aspects of Australia-India relations are both sides on the ball?

In about 15 years’ time, India will be the most populous nation on earth, overtaking China whose population will reach its peak at just under 1.5 billion around 2030. In contrast, the Indian population is expected to peak closer to 2060 at something over 1.6 billion. With such  population growth, it’s a good thing that India is currently the fastest growing economy, according to OECD data. Real GDP growth is expected to be 7.2% this year and per capita incomes are rising fast.

From Australia’s point of view there is clearly a lot of potential in this relationship. Australia and India don’t just share a love of cricket. There is also the Commonwealth and a history of colonialism. They have a common democratic system and a common judicial system, not to mention the widespread use of English as a lingua franca in India. It should be no surprise that Australia has seen growing numbers of Indians move to the country, and India is now ranked fourth as an origin for those living in Australia but born outside. There are almost as many people of Indian heritage - 455,000 – living in Australia as there are those of Chinese origin.

But, when it comes to connecting the two countries with air services, the Indian relationship appears to be a substantial way behind that with China. 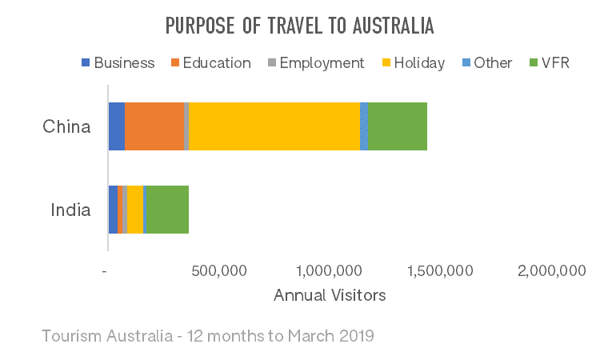 It could be that the pattern of travel between India and Australia is just lagging behind the one with China and that as the market develops the proportion of leisure travellers will increase and VFR will decrease as a proportion. But is this inevitable? Is it even likely from today’s starting point.

According to OAG Traffic Analyser, there were 1.65 million passengers between the two countries in the 12 months to May 2019. This was up by 11% on the previous year. Shockingly, perhaps, 93% of them travelled via another airport and of these 95% used airports in a third country.

The most popular connecting hub airport was Singapore (SIN). Over 40% of passengers connected there, or a total of 637,000 passengers. Next was Kuala Lumpur (KUL), accounting for a further 21%. While many Indians have family also in Singapore and Malaysia, and so these airports are familiar and easy to use, where is the appetite for non-stop services between India and Australia? 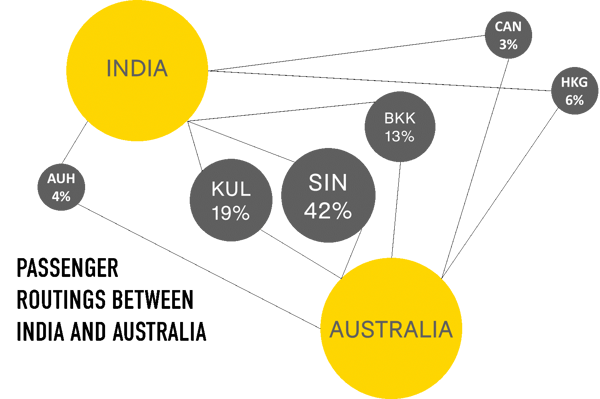 It would seem that Air India is giving the majority of this market to rivals Singapore Airlines, Malaysia Airlines, Thai Airways, and Cathay Pacific, amongst others. Non-stop fares, according to OAG Traffic Analyser, are only around USD250 for a return ticket and this is for a journey of over 10,000km. The problem appears to be yields.

Going back to the comparison with China, at the end of 2016 Australia and China agreed to liberalise their air services following growing demand. Australia took a progressive approach given that Chinese carriers operated most of the capacity. Although the agreement fell short of Open Skies, it paved the way for an expansion of air services, plenty of competition and a surge in air traffic. The number of passengers rose by 60% between 2015 and 2018.

In June last year, India and Australia also announced the liberalisation of air services, with designated airlines of either country able to fly unrestricted between six airports in each country. This was perhaps a triumph for optimism over reality given that there was plenty of unused capacity in the existing bilateral agreement. What the new agreement means is that there is currently permitted capacity of 6,500 seats each way per week by airlines of either Australia or India. That would be 52 frequencies in each direction if the bilateral agreement was fully used, very far short of operations today. In fact, since signing the agreement a year ago, there has been no apparent change in direct air services.

Many of the fundamentals for the India-Australia airline market look good; growing volumes of travellers, economic growth, large immigrant communities, common history, open skies. Where India differs from the Chinese market is that China has a number of hungry carriers with full aircraft orderbooks and a travel eco-system – supported by the Government - which is driving outbound travel. By contrast, India remains a conservative market with mechanisms in place to protect national carriers.

To realise the full potential of the India-Australia market we may need to wait until IndiGo is ready to fly to Australia but with plenty of potential foreign destinations ahead of the queue for that privilege, it might be some years away. Even then, the low yields being achieved from the indirect services may still put off a long haul low cost operation from an airline such as IndiGo.

While more non-stop air services might be some way off, there’s good reason for Tourism Australia to invest in the Indian market. The next Test series between the two countries is due to take place in India at the back end of 2020 and with Indian cricket TV and online viewing figures among the hottest of any sport, expect to see cricket interspersed with campaigns to promote Australia.