The End of an Era - Airbus & Boeing Aircrafts

Airbus called a halt to production of its four-engine wide-body A340 towards the end of 2011, although the company has still been supporting the fleet even though it is no longer in operation.

Three and a half years down the line and unsurprisingly, there are fewer A340s in the air. This year there will be 119,000 scheduled passenger flights using this aircraft type, down from a peak of 206,000 in 2008. At this current rate of decline, it will only be a matter of years until they are no more. 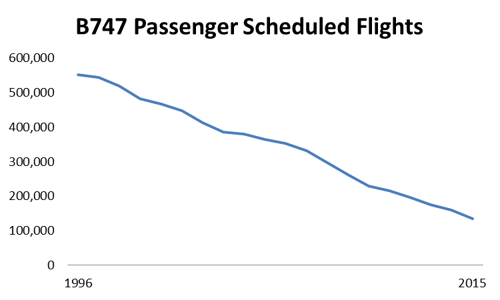 Although still in production, the downward trajectory of Boeing’s 747 passenger flights shows that this four-engine wide-body aircraft has seen better days. The 135,000 scheduled passenger flights which will take place this year on the archetypal ‘jumbo jet’ will be a fraction of the number at its peak. But, with over 1,500 deliveries of B747 variants since the plane first took to the skies in 1969, the B747 has exceeded early expectations.

What we are now witnessing is the long drawn out demise of an iconic aircraft and the somewhat faster end of another.