Airlines Hopes of US$160 Billion Revenue Injection Lost in August

Peeking over the wall to the end of the year tells you all you need to know about the challenges airlines, tour operators, hoteliers and the whole travel industry will face this coming winter, as the pandemic refuses to go away.

Since the first week of August, airlines around the world have cut back their planned capacity by some 100 million seats. Assume in normal times 80% of those would have been filled at an average yield of US$200, that’s US$20 billion of revenues airlines had “hoped” to see that isn’t going to happen. These numbers are before the EU recommendation to limit US traveller access, partly because of the Delta variant raging in the US, but perhaps more out of frustration at the lack of reciprocity from the US authorities. Chances are, the transatlantic market will now be closed until late November, when the Thanksgiving season may offer a glimmer of hope.

Even the most optimistic analyst or airline CEO will now accept that the indicators for a further recovery by the end of the year have been blown away; the situation is grim with many international markets heading in the wrong direction for at least the next few months. For airlines that have recalled staff, furloughed them again, redesigned their networks, and added aircrafts back to their operations, the costs are a heavy burden to take forward into the winter. 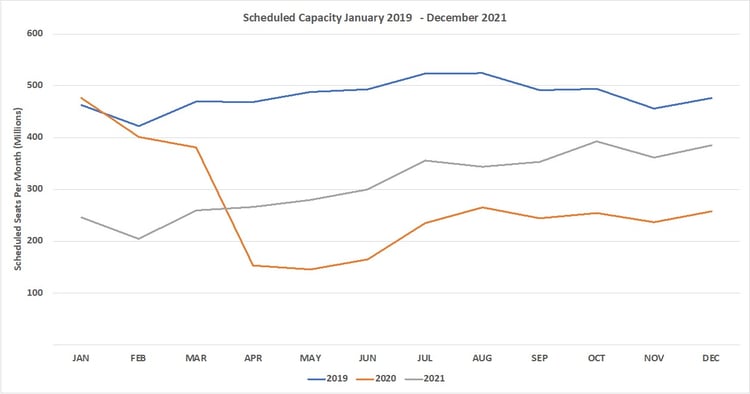 Against that gloomy, longer-term forecast, this week’s data actually reports an increase in global capacity of 2.8%, as strong growth in North East Asia (well, China) and another rubber ball bounce back in South East Asia (Indonesia/India) takes weekly capacity back to 79 million seats a week. Capacity across the South East Asia region has settled at around 30% of the 2019 levels, making it the worst performing region on the planet, some comedown for what was one of the fastest growing markets in the world.

Other major markets are now beginning their seasonal roll downs, such as North America, whilst Europe has perhaps another two weeks before the normal capacity reductions begin to flow through. Early indications are that the US Labor Holiday weekend will be slower than many had hoped for, bringing an earlier than anticipated close to the domestic peak with some major carriers already saying the third quarter will no longer be profitable. 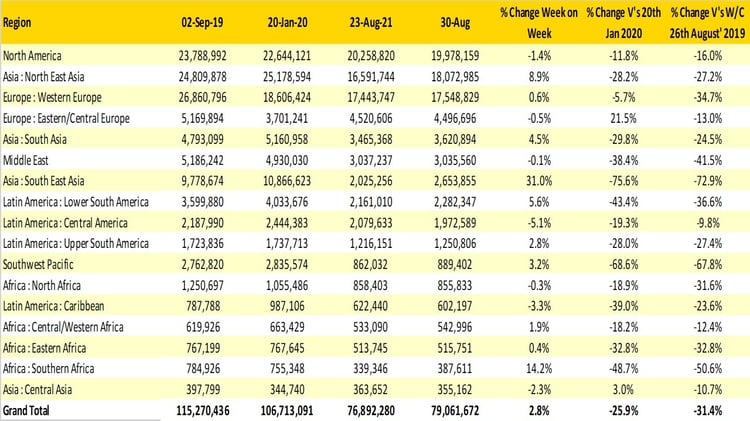 With apparently no reported Covid-19 cases on some days last week, China has added back another 1.5 million seats across their domestic networks. Whilst these capacity increases are welcome in some ways, they are also a problem for the wider region; the longer domestic capacity is added back, then the longer before any real pressure is placed on the airlines to bring back international capacity.

Seven of the top twenty country markets continue to operate at around half of their 2019 capacity levels. The United Kingdom proudly ‘leads’ the seven, despite having one of the highest vaccinated rates on the planet. The disconnect between international capacity and vaccine rates defies all logic… unless you work in the Department of No Transport. Also in the list of seven is the United Arab Emirates, where the heavy reliance on connecting traffic flows into South East Asia is impacting any capacity for recovery beyond the current levels. Emirates will this week return to Manchester; slightly before Christiano Ronaldo and certainly with less hype. 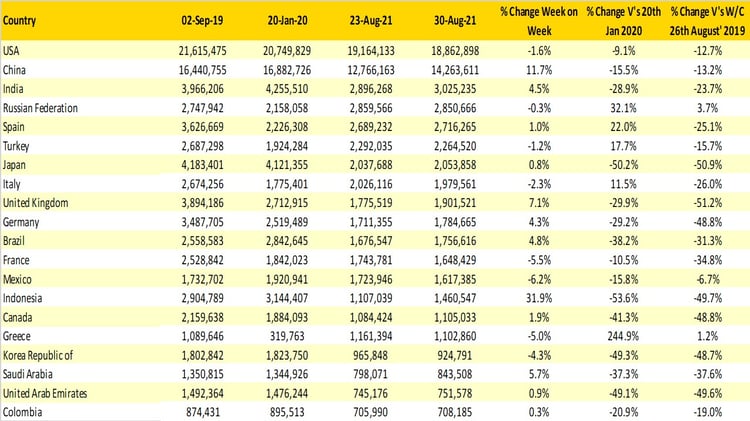 There is little change to the top 20 airlines. The 'Big Three' US carriers all made slight adjustments last week to their capacity- we suspect that they may make more next week considering the EU recommendations on travel access- whilst Southwest are holding steady in third position across the top twenty. Slightly further down the list is JetBlue with a 3% cut in capacity; should the UK Government follow the EU and restrict US nationals visiting, then the airlines recently launched JFK – LHR operation will face a challenging winter. The US airlines may have had a reasonably strong domestic summer season, but the international restrictions will start to bite in the next few months, especially with corporate demand remaining soft. 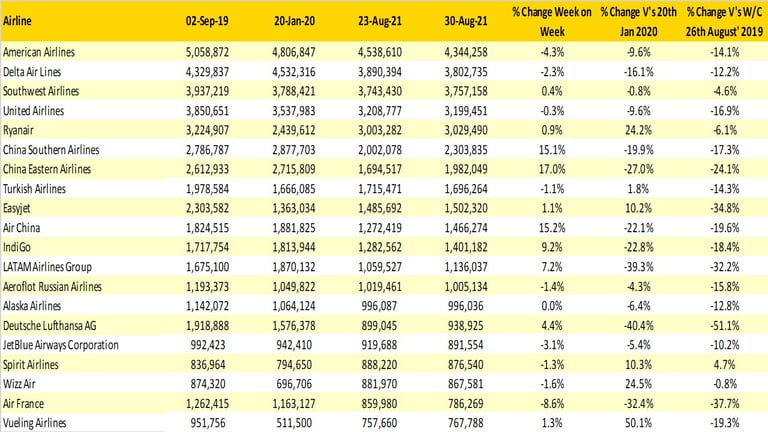 On the last day of August, as the Summer season draws to a close, it seems that any hope for recovery is now further away than ever and although there may be some pockets of recovery between now and the end of the year, much of the market is stuck. China and the United States continue to be the two major international markets that need to reopen before anything significant changes and neither seem interested in making that happen. Does anyone expect either to happen soon?

US Airlines Steal An Advantage Over Competitors

Why Are Airlines Offering Flights to Nowhere?