Last week’s marginal reductions in global capacity have turned into a rush of capacity reductions in many markets around the world, a 6.5% reduction in one of the peak weeks of a normal year tell you everything you need to know about how the industry is struggling to recover. To see 5.3 million seats dumped over a seven-day period and global capacity back below 76 million a week is as frustrating as following a French marathon runner to a water station! There are few positive pointers in this week’s data, two of the largest regional markets report capacity reductions of close to 25% week on week leaving global capacity at 36% below the 2019 level!

In the week when IATA revised their forecast losses for 2021 to US$47.7 billion and with international demand expected to be at best back to 34% of 2019 levels there is not much positivity around. Still, the Premier League starts this week.

An additional 28 million seats have been removed for sale through to the end of October and we can expect more to follow in the coming weeks as airlines begin to look forward in a bit more detail at forward bookings, if indeed there are any! International capacity remains at less than half 2019 levels and shows no signs of a significant recovery heading into the autumn whilst major domestic markets such as China and Australia continue to see capacity cuts as they contend with the latest Covid-19 outbreaks. 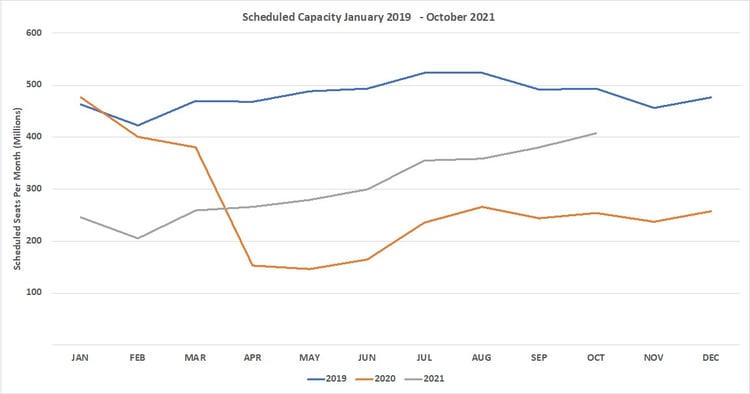 The big and indeed depressing news is that North East Asia has seen a 25% week on week reduction in capacity and the loss of 5 million seats with China accounting for a slightly higher 5.2 million cut in the last seven days. Although all the capacity cut is in the domestic market, it places the chances of international capacity recovering in China further away and perhaps not before the second quarter of 2022 given the extreme caution being shown by the authorities; the “ripple effect” into other regional markets will therefore continue.

South East Asia is equally struggling. This week another half a million seats were removed from the region, which may seem like a small loss, but in the same week in 2019 there were some 10 million seats in the region, this week there are 1.8 million just 17% of normal capacity levels. The numbers are just horrible across these two regions which in normal times account for 30% of global capacity, this week they account for just over 22% and when you consider that these two regions were amongst the first impacted by the pandemic confidence in a recovery by mid 2022 must now be questionable.

At least in terms of scheduled capacity the USA remains the largest country market although with no growth week on week; operational that capacity number may be slightly different as one major carrier continues to struggle with a series of operational issues; it will take some spirit for them to get through those challenges this week. This week also sees the launch of JetBlue’s new service to London Heathrow, it’s an exclusive service purely for US passport holders at the moment which will test the financials in the start-up phase, but increased competition in one of the most lucrative markets in the world will be welcomed.

The largest week on week capacity growth is in Japan where sadly the Olympics finished over the weekend with the show now moving to Paris in three years’ time. The other notable market for week-on-week growth is the UAE which has been removed from the UK’s red list resulting in Emirates and Etihad once again launching services back to a major source market. However, the largest growth market from the UAE for the two airlines this week is Pakistan where restrictions have been eased resulting in some 14,000 additional seats added and again highlighting how quickly airlines can add back capacity when conditions improve.

The extended lockdowns in Australia have resulted in nearly half of all capacity being cut in the last six weeks as airlines struggle to operate, Qantas have furloughed some 2,500 staff in the last week and operating conditions continue to be challenging. The Australian authorities appear to have less understanding of the aviation industry than their UK counterparts, which is remarkable! Having made a subtle change in entry requirements that means any Australian national re-entering the country can then only leave with specific approval, it means nationals are effective prisoners in their own country, is this history repeating itself? Any change in travel restrictions to Australia will be based around vaccination levels of 80% being realised; with 19% of the population pricked into doing anything it could be late 2022 before any real improvement is seen in the international market.

The top three airlines remain unchanged week on week and have settled into their respective positions with little reason to expect any change in their ranking in the coming weeks; they are all sufficiently distanced from each other to see anything dramatic happening. Ryanair continues their remarkable capacity recovery and are now the world’s largest airline outside of the United States. I’m sure that they will use that statistic in some investor presentation soon, as will the claim that they are twice as large as easyJet!

All major Chinese carriers have been impacted by the most recent domestic lockdowns, China Southern have cut nearly have their normal weekly capacity and Air China one-third of all capacity. We do not expect to see an immediate recovery of that capacity in the coming weeks which will further depress the global recovery.

Finding any positive developments in this week’s data is a challenge, this is not the time of year when we normally see such dramatic capacity cuts and the data is beginning to point to a recovery being further away than we had perhaps hoped a few weeks back. In the next few weeks airlines will begin to look long and hard at their winter 2021/22 programmes and many of the data points would suggest that capacity will not be much better than last winter.

Airlines are currently “batting in a corridor of uncertainty” – do they operate services with 40-50% load factors and marginally cover DOC’s or do they consolidate and frustrate consumer confidence but protect their balance sheet. And for anyone who follows cricket, that “corridor of uncertainty” normally results in a wicket falling! And here is one sobering final thought.

Every passenger carried last year cost some US $71 for the airline that had the “pleasure” of carrying that person; just imagine how much that would have been if every piece of funding that the airlines had received had not been made available. Perhaps double that amount?