When Will You Fly? Early Signs Reveal Mixed Messages

Participants from OAG’s webinars gave us an early indication of future travel behaviour. We asked our respondents what consumer sentiment was like in their country and when they would be willing to fly.

Largely from within the travel ecosystem - airlines and airports, consultants, financial institutions, travel tech and hospitality, government and industry bodies as well as education, research and the media - respondents, all frequent travellers usually, across 33 countries, they responded in plenty.

Consumer sentiment is of fear of flying

We asked our respondents what consumer sentiment was like in their country and the response back tended to fearful. On a scale of 1 to 10 where 1 is fearful and 10 is confident, the average score was 3.8, definitely nearer the fearful end of the scale than the other.

The most confident consumers, according to our sample, are those in the Middle East, who provided an average score of 6.2 out of 10, while those in South Asia, South East Asia and South America all averaged a score of four or more. 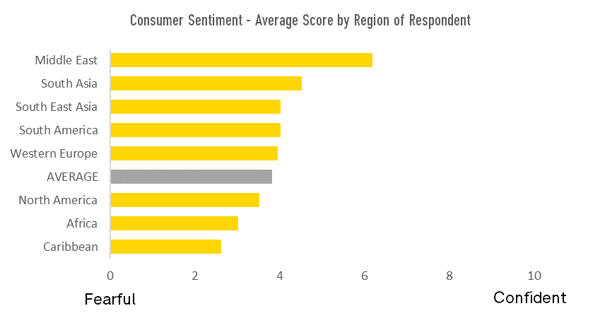 At the other end of the scale are the Caribbean and Africa who, at least according to those listening to the webinar, are the places with the most fearful consumers.

When we can fly for work, we will!

In contrast, our respondents show a willingness to get back in the air. Some 35% will travel as soon as their work requires them to, and another 11% will travel when restrictions are lifted.

Excluding those who don’t generally fly for work, more than half (56%) expect to fly as soon as their work requires them to travel or as soon as restrictions are lifted. A quarter say they will wait until they are convinced flying is safe, with the remainder waiting until there is a vaccine in place or when immunity passports are available.

Taking domestic flights for leisure – no problem by year end 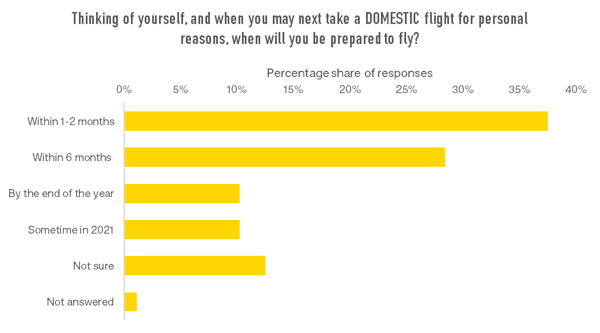 Confidence around international flying for personal reasons was encouraging and 58% say they are willing to take such a flight this year, with 30% prepared to fly within 2 months of restrictions or quarantine measures being lifted. Around a fifth say they are looking for a vaccine or immunity passport to be in place before travelling internationally by choice but that only reinforces the sense that this group as a whole are not especially fearful of international flying at the moment. 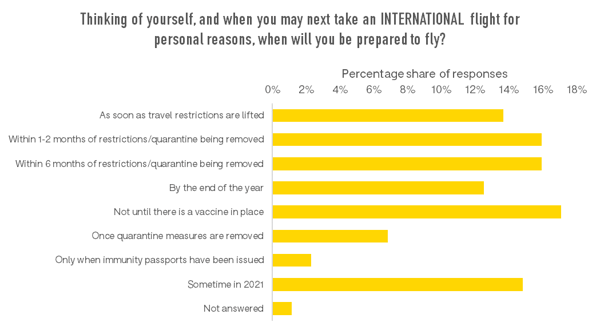 Mixed messages from the industry itself

The gap between industry confidence and consumer fearfulness was also evident from the webinar itself. Our panel observed how many airlines have retained significant capacity in their summer schedules, but that as each week goes by they are withdrawing some of that capacity in the face of restricted flying and poor consumer demand. At the moment, domestic schedules for July and August appear to have as much capacity as last year, while international schedules are not far off 2019 levels of capacity.

While there are why airlines have been reluctant to change the summer schedules ahead of time, and the industry is keen to get flying again, there is a clear mis-match between what the industry hopes for and what will be achieved?

So, what will it take for expectations to align? Vietnam leads the way

A glimmer of hope can be seen in Vietnam where capacity has been returning for weeks now. Admittedly the country has benefitted from having had no recorded COVID-19 deaths and only 328 cases. Vietnam removed social distancing restrictions on aircraft on May 7th although passengers are required to socially distance as they go through airport procedures. A few weeks ago the Vietnamese CAA reported passenger volumes at 38% of the daily average last year, and more recently a couple of the local airlines have reported load factors of 80-90%. Industry and traveller confidence appears to be better aligned. Let’s hope that once the covid-19 risk is reduced elsewhere, that passengers lose their fear of flying as quickly. 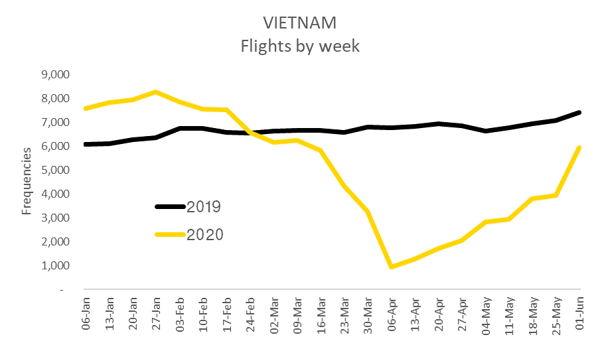