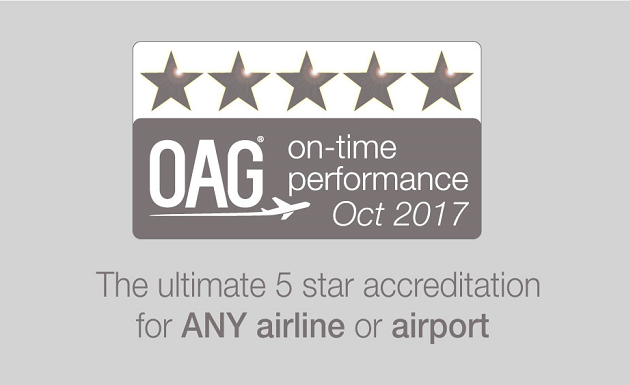 OAG is proud to award 5-star ratings to 14 airlines and 49 airports in the latest update of its On-time Performance (OTP) Ratings.

South African airline, Safair, is one of those airlines and comfortably tops OAG’s list of 5-star airlines having achieved the highest OTP of any qualifying airline with 94.9% of flights on-time over the twelve months up to September 2017.

In North America, Hawaiian achieves a 5-star rating while Delta, the world’s second-biggest airline for flights, succeeds in gaining a 4-star rating.

Jetstar Asia is the only Asia Pacific carrier to achieve a 5-star rating, while three airlines in Latin America - Copa, LATAM Airlines Ecuador and Sky Airline – all achieve 5-star ratings.

Among airports, Japanese airports continue to lead the way for OTP. Nine are awarded 5-star ratings with Tokushima Airport (TKS) and Kochi Airport (KCZ) achieving the highest average OTP of any airports. Tokyo International Airport, also known as Haneda (HND), comfortably made it into the 5-star ratings, which is to be commended given the size of the airport operations.

European airports should be applauded for their strong OTP with twenty making it into the 5-star list this October. While Birmingham Airport (BHX) is by far the largest of these, credit should be given to 4-star Madrid Barajas International Airport (MAD) which is the only major European hub airport to achieve a 4-star rating, or better.

Arguably, excellent OTP is harder to achieve at congested airports and those running hub operations with tight turn-around times. At both, late arriving inbound flights have the potential to play havoc with the schedule. Few of the largest airports achieve 5-stars although many of the largest airports in Europe and North America have been awarded 3-stars or 4-stars. In contrast, many of the large Asia Pacific airports have been awarded a 1-star rating pointing to the continuing need for them to focus efforts on improving punctuality.