Last week we were very close, this week we have broken through the 50 million weekly seats mark which is great news, however, at 53.8 million we remain at just 45% of the capacity available in the same week last year. And just to give you some historic context in 1996, the earliest online year for OAG data there were some 52.6million seats; we have come a long way in those years!

A real positive this week has been the capacity drop out for this week compared to that planned last week. In total we have seen just some 1.7 million seats removed or around a 3% change in short notice capacity. Perhaps an indication that airlines are finally getting a closer grip on planned operations as the recovery continues or equally that many network planners have taken a well-deserved holiday on their own services in the last few days.

Slowly but surely, and perhaps faster than some had thought, capacity is returning with 34% more capacity than that reported in mid-June when the first major breakthroughs in lockdowns, quarantines and travel restrictions were beginning to ease. Such rates of growth surely cannot continue into August can they?

Nine of the ten largest regional markets reported further growth this week ranging from 16% in Western Europe through to the only market reporting a decline; the Southwest Pacific region with a 2% reduction in capacity. Many of the regional markets remain at or around 50% of their January capacity levels; the notable exceptions being North East Asia and Eastern Europe where capacity is edging ever closer to three-quarters of the January base point.

The lack of international scheduled services continues to hamper any significant recovery in the Southwest Pacific region which is now at just 26% of its January level while in Lower South America (-83%) the continued rise in Covid-19 cases and border lockdowns continues to impact any recovery.

Amongst the other regional markets not highlighted below the two poorest performers are Upper South America (-89%) and South Africa (-87%), markets that have both seen airline failures and Chapter 11 processes impact any recovery aside from high rates of Covid-19 infection.

With apologies to the rest of the world, the United Kingdom is back! In tenth place with a staggering 47% increase in capacity week on week. The opportunity for escaping to the beaches and sunspots of Europe just as the summer holiday season commences proving irresistible, apparently. Spain also continues its rise through the top ten now having reached seventh position having seen capacity increase four-fold in the last month with over one million scheduled seats restored to operation.

Italy, France and Germany are all hovering within a few extra flights from the top ten and a sneak preview forward to next week’s data suggest that France sneaks into the top ten with Turkey dropping out; that does of course assume no changes in the next seven days.

Last week’s significant capacity increases from both American Airlines and United Airlines could not be repeated for a second week although American adding a further 200,000 plus seats a week into the market reflects some confidence in future demand. It also places the airline ever closer to taking back the number one position from Southwest Airlines and next week could indeed see a very close contest between the two airlines.

Increases in capacity from the “Big Three” Chinese airlines are linked to the latest easing of movement restrictions in Beijing as the lockdown from the latest spike eases. As we have mentioned before until China allows international capacity back to the previous levels many surrounding regional markets are unlikely to grow so China literally holds the key to any further capacity recoveries in both North and South East Asia.

While some airlines are showing a recovery, at least from a capacity perspective, others continue to struggle. Emirates for instance are only operating some 17% of their normal weekly capacity; British Airways only 19% despite other UK based airlines being much more positive in their recovery and Singapore Airlines just 5% of a normal week’s operation. In total nearly 140 airlines who operated scheduled services in January have yet to restart operations and of course some of those sadly will not be returning at all.

Finally, a quick look at the top ten fastest growing airport pairs week on week in Western Europe highlights the UK market obsession to get to Palma as quickly as possible, particularly from Manchester and Birmingham. Indeed, Manchester appears in four of the ten fastest growing airport pairs this week in Western Europe and Spain in six of the ten. It’s reassuring to know that even after such a crisis the same old routes and markets come back the quickest. 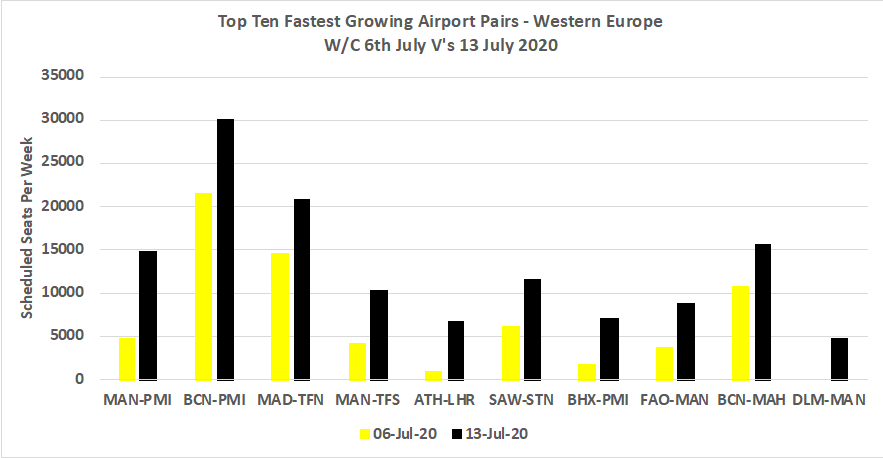 The recovery of capacity in Western Europe is obviously positive although demand has yet to reach the levels of previous years and probably will not over the whole of the summer season. It’s very clear and no surprise to anyone that the recovery continues to be built around domestic markets, then short haul regional with long-haul languishing a long-way behind all other markets.

Next week’s blog will be written from the beach in Spain where we will be researching the dramatic increases in capacity……..if only!