Inside China's Airline Families – Eyeing Up The Neighbours

OAG’s latest blog series takes a closer look at each of the China’s airline families; China Southern; China Eastern; Air China and HNA Group. We look at the airlines they operate, what drives their strategy and their unique attributes as part of the biggest aviation market in the world.

Up first is a high-level overview of these 4 operations followed by a deeper dive into each group.

Four large airline families dominate China’s aviation industry. Between them they handle almost three quarters of all scheduled aviation capacity and, like busy neighbours, they jostle up against each other at airports across the country.

They have been responsible for adding 57m new seats in the market in the last 12 months, which is nearly two thirds of all capacity growth to and from China.

Each Group has its own unique network profile with different airports performing as hubs or primary  network nodes. The diagram below shows the strength of presence of each of the airline groups at China’s Top 10 airports. 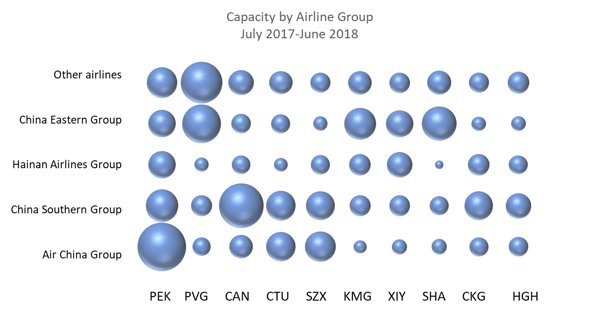 The China Southern Group is the largest Group across some performance metrics. It has more network capacity, both domestically and internationally, than any other airline Group and has the biggest fleet with nearly 800 aircraft. It also has the largest order book with 215 aircraft on order.

The China Eastern Group operates to the most destinations - 280 in all, making theirs the largest network. 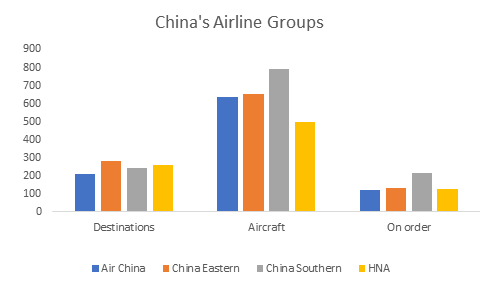 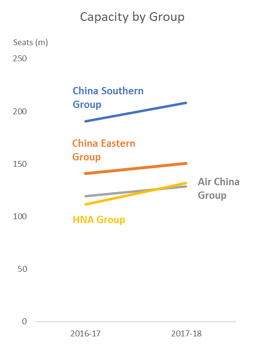 The Air China Group has the largest proportion of capacity dedicated to international services with 18% of its seats operating internationally.

All four airline families have a strong presence at Beijing Capital Airport, although China Eastern is less reliant on this airport than the others. With the opening of the new Daxing airport scheduled for late 2019, the expectation is that both China Southern and China Eastern will move across to the new airport, while Air China will stay put.  Assuming there is an increase to airspace capacity around Beijing, this move should allow each group room to grow.  China Southern have already publicly declared their ambition to handle 40% of the new airport’s traffic and have a large aircraft order book of deliveries between 2020 and 2025 to assist them with that goal. 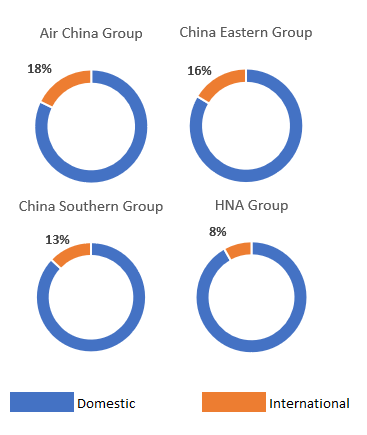